[ The Korea Herald – Send E-mail ]
[Feature] Lai Dai Han people still seeking apology, roots in Korea
Children fathered and abandoned by Koreans during Vietnam War demand apology, recognition of their identities by Korean governmnet.
By Ock Hyun-ju
Published : Nov 27, 2019 - 15:27
Updated : Nov 28, 2019 - 16:59
Nearly 45 years after the end of the Vietnam War, some Vietnamese still live in the shadow of the war.

Among them are the Lai Dai Han people -- a term meaning mixed blood in Vietnamese and referring to those born mostly to Vietnamese women and South Korean men during the war.

As the Korean government remains lukewarm about recognizing the negative aspects of Korea’s involvement in the war -- from massacres of civilians allegedly committed by Korean troops to half-Korean children left behind in Vietnam -- the Lai Dai Han are continuing their fight to get an apology and find their identities.

No exact data is available on the number of Korean-Vietnamese because many of them choose to conceal their roots to avoid discrimination, activists say.

An estimate by a Korean scholar puts the number of Lai Dai Han around the world at least 5,000. 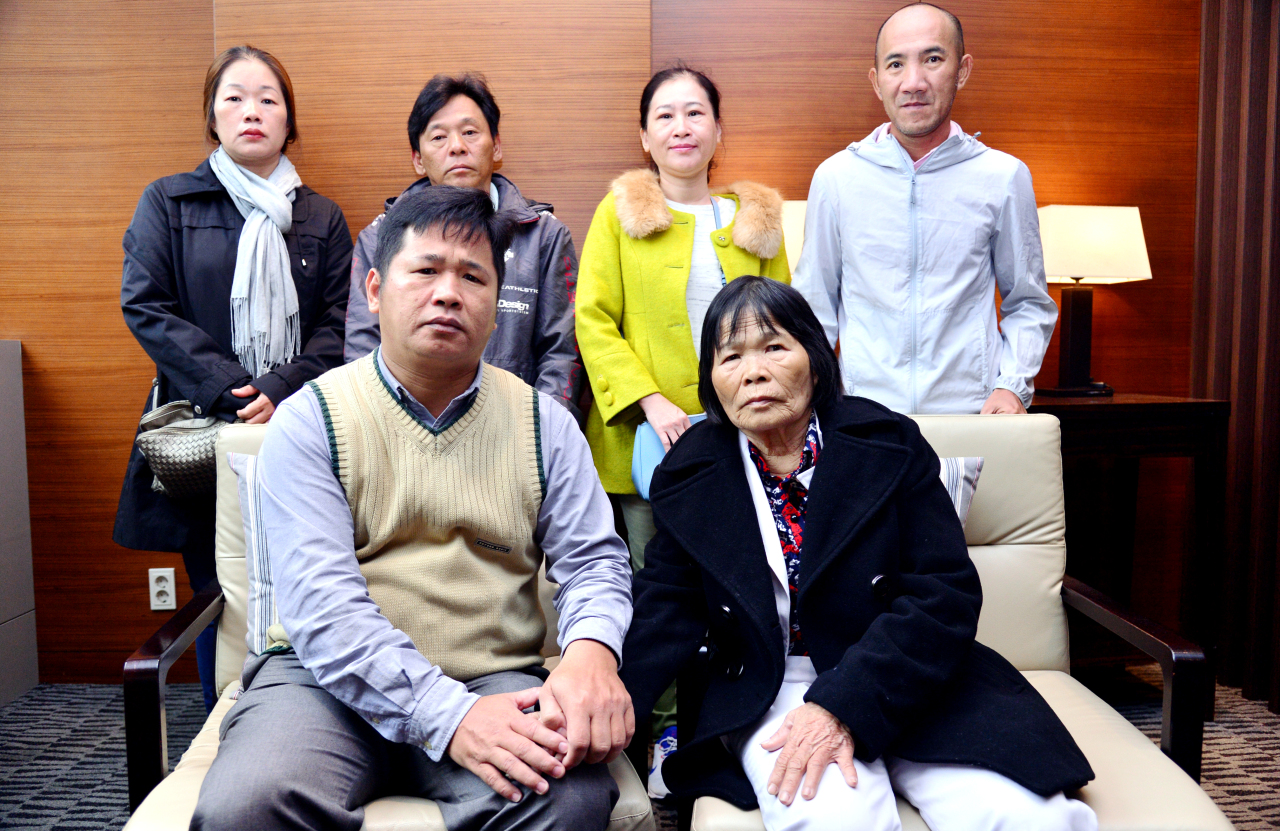 A group of Lai Dai Han people, who visited Seoul to ask for help from the Korean government and lawmakers in their campaign to find their birth parents and gain Korean citizenships, pose for a photo during an interview with The Korea Herald in October. (Park Hyun-koo/The Korea Herald)

Tran Thi Ngai, 79, was a 24-year-old studying nursing when she was raped by a Korean soldier at her home in Vietnam’s Phu Yen province.

Ngai said her attacker, a Korean sergeant surnamed Kim, kept coming back and she eventually had two children by him. When she told him about her pregnancies, he showed no interest and abandoned her. She also has a son from being raped by another sergeant, surnamed Park.

She said she and her children were stigmatized and ostracized by their community.

Labeled as a rebel against Vietnam’s communist regime after giving birth to children of Korean soldiers, she had her property confiscated by the government and was sent to a detention facility for a year. Upon her release, she had to move to another city.

“I despise the two Korean soldiers who ruined my life. I even thought of committing suicide with my children as I had nowhere to turn to,” she said during a recent interview with The Korea Herald. “I want an apology from the Korean government.”

Under the military-backed authoritarian Park Chung-hee administration, Korea sent over 320,000 soldiers to Vietnam between 1964 and 1973 to support the US in its fight against communism in Vietnam. Many Korean civilians also went there for businesses opportunities.

Many Vietnamese-Korean children had to hide their identities or live with prejudice and discrimination as children of “enemies,” with little access to education and other social services.

Tran Dai Nhat, the 49-year-old son of Tran Thi Ngai, recalled being called the son of a dog and a cow as a child because he did not know his father and he was of mixed race.

“I came here to seek justice for my mother and me,” said Nhat, who now leads a movement seeking justice for the Lai Dai Han people. “I would like to be confirmed whether I am a son of South Korea.”

Nhat eventually located his sisters’ Korean birth father by word of mouth and visited him in Seoul a few years ago, but the former sergeant refused to acknowledge that he had fathered them.

Nhat is now awaiting the results of a DNA test he underwent at a hospital in the UK in June as part of his efforts to confirm that he is the son of a Korean soldier. He has also asked for an independent investigation by the United Nations Human Rights Council into allegations of sexual violence by Korean soldiers during the Vietnam War.

Not all Lai Dai Han people, however, were born as a result of rape.

“Many of the Lai Dai Han people were born as a result of consensual relationships. They formed a family, but the war broke up the families. Koreans and Vietnamese alike were the victims of the war,” said a pastor who is helping a group of Lai Dai Han people.

Led by Nhat, the group arrived in Korea in late October to seek help from the Korean government, parliament and civic groups to find birth parents they have lost touch with or never met, or who abandoned them.

“I have no information about my biological father, only this picture,” Huong said with a wide smile on his face while showing a picture of him and his birth father. “I have been living as a Vietnamese. I don’t need a citizenship. All I need is just to find my father, find out whether he is still alive and see him even just once in my lifetime.”

The 50-year-old man was raised by a Vietnamese woman, Nguyen Thi Suong, who was then employed as a maid in the household of a Korean musician couple during the war.

He says his father, a drummer surnamed Ahn, and his mother, a singer surnamed Shin, were in Ho Chi Minh City for a performance in 1978. When they broke up, they left him behind in Vietnam.

“My (adoptive) mother has told me that I should find my biological parents in Korea when I got older,” said Cuong, who had photos of his birth parents with him and a letter from his Korean father. “I really wanted to see my parents even if only just once.”

“The government should conduct an investigation to identify the victims of sexual violence during the Vietnam War and the degree of suffering they went through, and apologize to the victims,” said Han Kyung-hee, secretary-general of the Korean Council for Justice and Remembrance for the Issues of Military Sexual Slavery by Japan, a civic group advocating on behalf of victims of wartime sexual violence.

The Korean government has neither addressed the allegations of sexual violence and massacres of Vietnamese civilians by Korean troops during the Vietnam War nor conducted an investigation to determine whether the allegations are true.

The Vietnamese government, which appears to be trying to keep the issue low profile, has not demanded an apology and the Korean government has not offered one. Instead, the two sides have sought to pursue a future-oriented relationship.

Asked whether the government acknowledged any sexual violence by Korean troops, the Foreign Ministry did not offer a direct answer. Its spokesperson Kim In-chul instead said, “We will continue efforts to further develop favorable relations of two countries.”

The demands of the Lai Dai Han people, who are now mostly in their 40s and 50s, should be heard before it is too late, argues Ku Su-jeong, executive director of the Korea-Vietnam Peace Foundation.

“It is fair to say the Korean government has not made any efforts to address the issue. There has neither been any investigation nor research,” Ku said.

So far, most of the Lai Dai Han people have been looking for their family members individually, mostly by word of mouth.

Now, the Lai Dai Han people want the Korean government to step in and help them reunite with their birth parents. Some also want to be recognized as Koreans and settle here by gaining Korean citizenship.

A paragraph in the “2018-2022 foreigner policy basic plan” released by the Justice Ministry says the Korean government will “review” measures for “foreigners who have ties to Korea, such as descendants of the Lai Dai Han.”

As part of the measures, the government issues C-3 visas for Lai Dai Han people when they wish to enter the country to participate in court proceedings or undertake administrative procedures to obtain Korean citizenship, the ministry said.

Under the current law, a Lai Dai Han seeking Korean citizenship must prove that a birth parent is Korean. If Korean birth parents refuse to acknowledge their Lai Dai Han offspring, the applicants have to file lawsuits to get their identities recognized.

Once their Korean parentage is proven, those over the age of 19 must pass an exam to become naturalized citizens. Those younger than 19 can obtain Korean citizenship upon registration without taking the exam. The exam entails a written test of Korean language proficiency and knowledge of the culture, as well as verbal interviews.