“Life on the Mekong; Connecting People, Creating a New Future,” held by the National Institute of Biological Resources, under the Ministry of Environment, kicked off Wednesday at Nurimaru APEC House in Busan on the sidelines of the summit held earlier in the day. The Mekong region refers to the area around the trans-boundary Mekong River in Southeast Asia.

President Moon Jae-in and leaders of five Mekong countries -- Cambodia, Laos, Myanmar, Thailand and Vietnam -- attended the exhibition after their summit, to view the results of the collaborative projects between Seoul and Mekong nations since 2007. 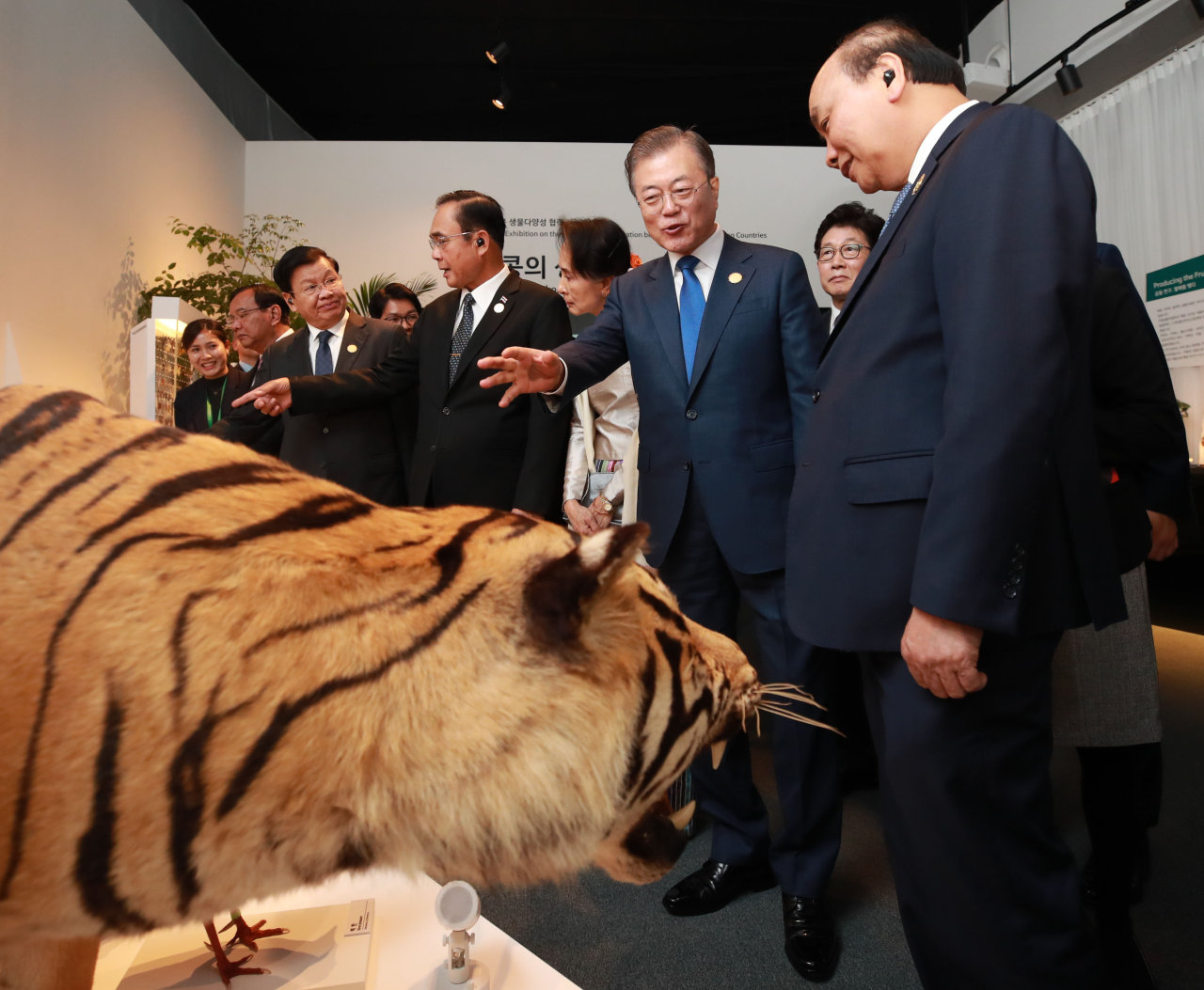 President Moon Jae-in (second from right) with leaders of five countries from the Greater Mekong Subregion -- Cambodia, Laos, Myanmar, Thailand and Vietnam -- at a special exhibition “Life on the Mekong: Connecting People, Creating a New Future,” in Busan on Wednesday. (Yonhap)
Researchers at the NIBR have secured specimens of 200 species of wildlife in the region, including the endangered Burmese star tortoise and slow loris, via joint study and donations, and published 19 illustrated guidebooks on them, which are on display at the exhibition.

Also on display are practical uses of the biological resources found in the region. This includes how researchers were able to find skin-brightening and wrinkle-treatment effects of a plant native to Cambodia, dipterocarpus intricatus, previously used mostly for kindling or making wooden tools, which led to the development of cosmetic products using it.

The exhibition consists of four parts: “Special Guests From the Mekong,” “Biodiversity of the Mekong,” “Connecting People” and “Creating a New Future.”

The theme of the first part focuses on the potential of the Mekong region in bringing sustainable growth for Korea, with its rich biological resources. It uses the allegory of the fable “Heungbujeon,” in which a swallow from the Mekong region brings fortune to the main characters.

The second part consists of the wildlife of the Mekong region -- such as the tiger, binturong and hornbill -- and sends the message that a global cooperation is needed to protect the Mekong region from pollution and climate change.

The third sector is about the importance of expertise in preserving the biodiversity, introducing the programs to professionals and interviews of individuals currently in the program.

The final section introduces the Mekong-Korea Biodiversity Center that is slated to be established in Myanmar for researching the practical uses of biological resources -- including the aforementioned cosmetic products -- and to support conservation of the ecology of the Mekong region. Moon and State Counselor Aung San Suu Kyi of Myanmar met Tuesday on the sidelines of the ASEAN-ROK Commemorative Summit, and agreed on the establishment of the biodiversity center.

The exhibition will be open to the general public from Saturday and will continue through Dec. 27 at Nurimaru APEC House in Busan, before moving on to NIBR in Incheon where it will run for two months.