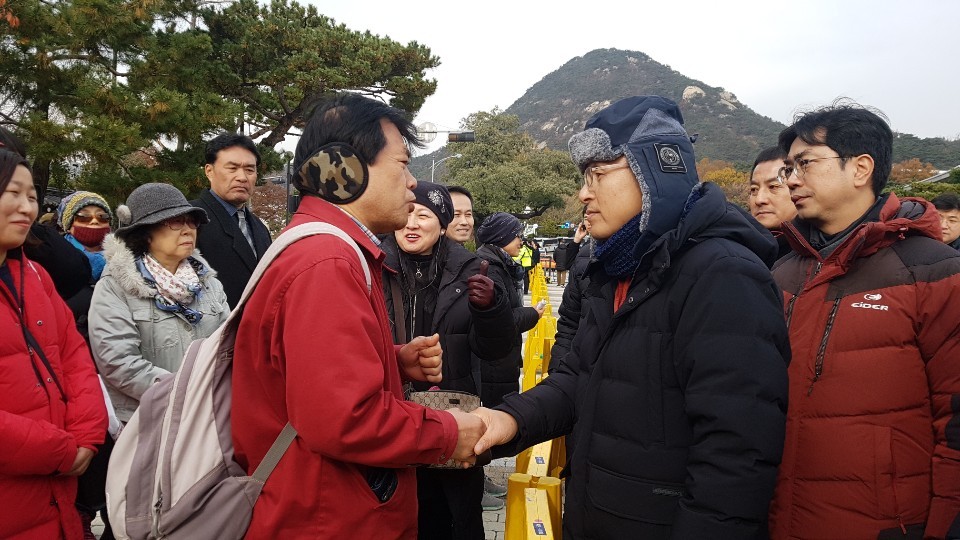 Hwang continued his hunger strike for a second day near the presidential office to protest President Moon Jae-in’s foreign and domestic policies. He demands that Moon extend the military intel-sharing pact with Japan, due to expire Friday at midnight, and scrap his income-led growth initiative.

But the hunger strike aroused criticism from both conservatives and liberals.

“It’s a hoax to divert attention from his leadership crisis. He’s losing grip on his own party,” said a spokesperson for the minor conservative Bareunmirae Party. A spokesperson for the ruling Democratic Party of Korea said, “He has no cause here. The fasting does nothing but harm.”

Some political experts, however, believe Hwang’s hunger strike is not totally random, as some make it out to be.

“His protest against Moon’s decision not to extend the military intelligence pact with Japan, for one thing, seems reasonable to me,” said Shin Yul, a professor of politics at Myongji University. “Terminating that pact has far more ramifications that what the ruling Democratic Party of Korea argues.”

Shin said the agreement embodies a shift in US foreign policy that has now embraced countries as far away as India as part of its broader security strategy in the Pacific region.

Still, all parties except Hwang’s own seem unable to connect with him.

“People are just too tired of this political wrangling,” Lee Jeong-mi, another Justice Party member, wrote on Facebook. Park Jie-won, a longtime liberal representative who is now an independent, said, “Among shaving the head, fasting and stepping down, resignation is what’s left.”

Experts say Hwang needs to be more decisive and inclusive to appeal to his traditional conservative fan base as well as the undecided who have doubts about his leadership.

“Look at him. He’s going back and forth between Cheong Wa Dae and the National Assembly, unsure of even where to stage the strike in the first place. And he meets with a far right-wing priest while on the hunger strike? What’s his message here?” said Rhee Jong-hoon, a political commentator.

“I get that he’s trying to mobilize the conservatives. But what he does is he’s actually inviting the far right, isolating himself from fellow party members and the conservative base,” the commentator said, adding Hwang would be unable to solidify a united conservative front.

“Thank you, I will do more to bring a change,” Hwang repeatedly said Thursday while shaking hands with his supporters. Nearly all remembered to tell him that they would pray for him. Hwang did not elaborate on what change he meant.