During his Wednesday visit to Apple’s laptop manufacturing facility in Austin, Texas, Trump hinted at the need to adjust tariffs for Apple amid lagging trade talks between the US and China.

“The problem we have is Samsung is a great company but is a competitor of Apple,” Trump said. “It’s not fair. We have a great trade deal we made with South Korea. We have to treat Apple on a somewhat similar basis as we treat Samsung.”

Trump’s visit followed Apple’s announcement in September that it would continue manufacturing the latest generation of the Mac Pro in Austin. It was a move that came after the Trump administration agreed to waive tariffs on certain computer parts made in China. Apple also announced that it had broken ground for a campus worth $1 billion near the plant. 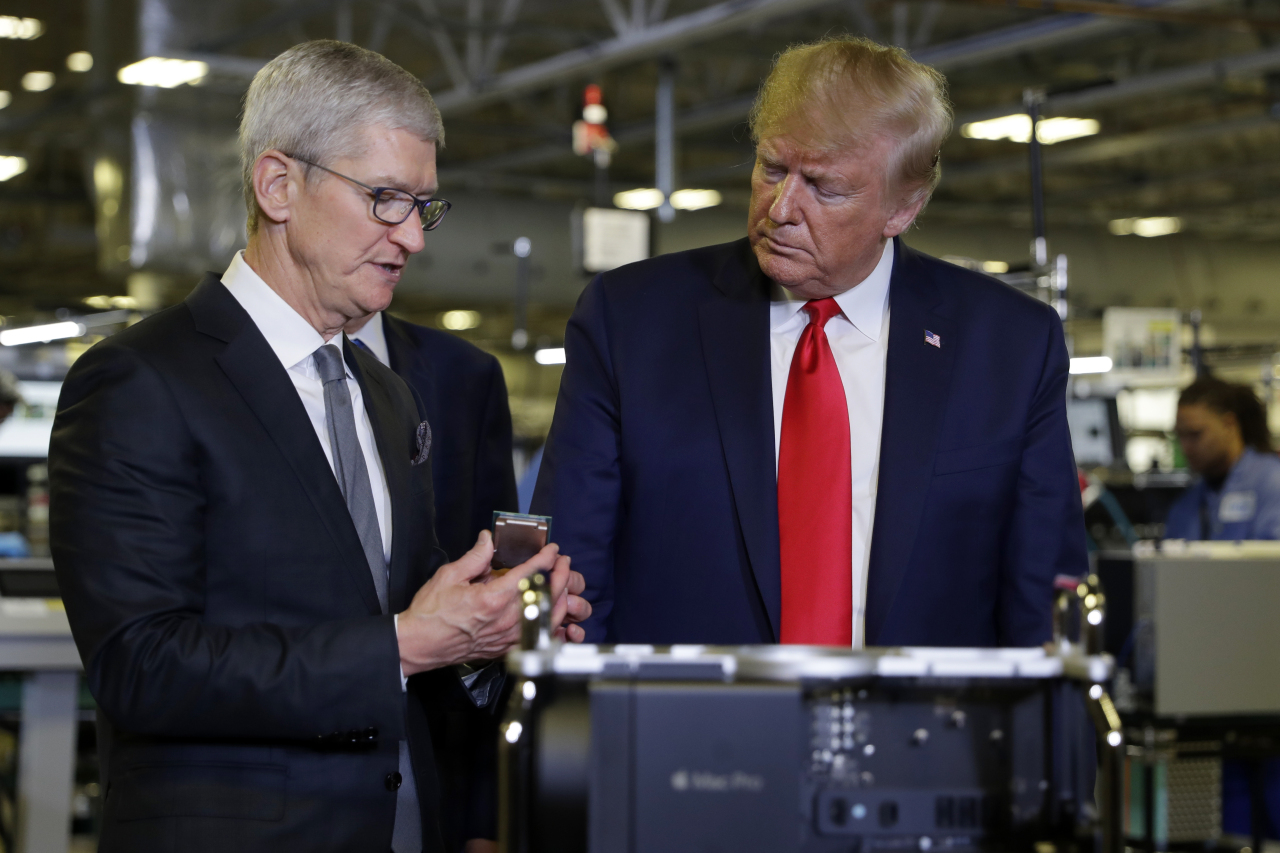 US President Donald Trump (right) looks at an Apple product at the company’s laptop plant in Austin, Texas, Wednesday. (Yonhap)
Due to the tariffs imposed by the Trump administration on imports from China, since September Apple has paid 10 percent tariffs on AirPods and Apple Watches that are manufactured in China and shipped to the US.

An additional $160 billion worth of made-in-China products will be levied with the tariffs starting Dec. 15, which will include consumer goods, clothes, toys and Apple’s iPhones.

Meanwhile, most of Samsung’s Galaxy smartphones bound for the US market are being produced in Vietnam and India.

If Apple is exempted from the upcoming tariffs on iPhones made in China, experts said it will benefit the US company cost-wise, but it won’t offer any new competitive edge over Samsung.

“It doesn’t seem like the tariff (waiver) would affect the Apple-Samsung competition in the US market,” said Joo Won, chief of the economic research division at Hyundai Research Institute. “I don’t think iPhones and Galaxy phones are in a relation that substitutes one another.”

According to market researcher Counterpoint, Apple was a dominant player with a 41 percent market share in the US as of the second quarter of 2019, followed by Samsung with 21 percent.