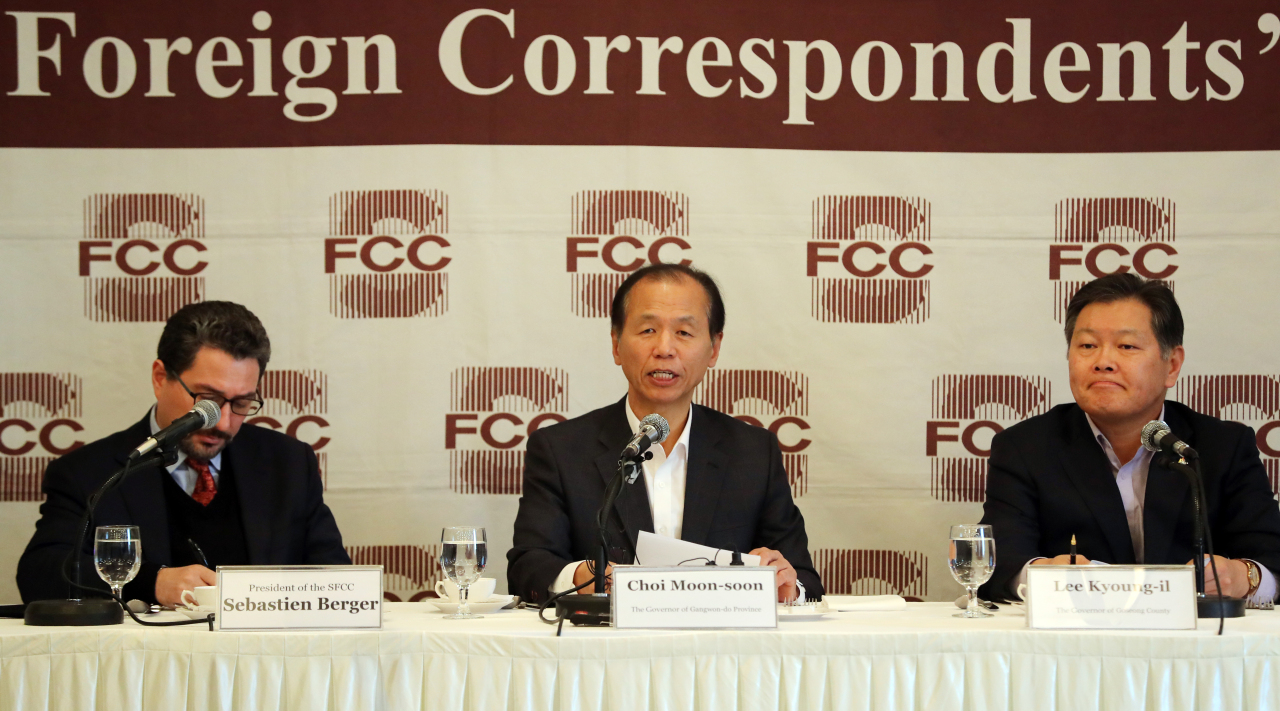 “Resumption of the Kumgangsan tours is the deepest wish of the Korean people, and a matter of survival for Gangwon Province and its Goseong County,” Choi said, adding, “The tours will help North Korea to open up to the outside world and usher in peace and stability on the Korean Peninsula.”

The two Koreas could cooperate again to revitalize the stalled program, according to Choi. But, some correspondents doubted his proposal because of the strained inter-Korean relations.

“Given the two Koreas are not practically talking to each other, how do you remain so optimistic as to suggest a resumption?” asked a correspondent for German news agency dpa

Gov. Choi admitted that the two Koreas remain at odds, but stressed relevant parties are working to restore dialogue. He said he hopes such endeavors will help resume the tours.

Gov. Choi said, “A North Korean guard killed the tourist because she set foot on a fenced-off military area near the tourism zone. After the incident, North Korea delivered safety assurances to our tour operator Hyundai Asan.”

Participants also discussed whether the resumption would violate UN sanctions because of bulk cash North Korea could gain from the tours.

“If North Korea receives a large amount of money in exchange for the tours, that could constitute a violation of the UN sanctions. Do you see any way to bypass them?” asked a correspondent for Chinese news agency Xinhua.

Chairman Sin Yang-soo of the Kumgangsan Enterpriser Association said, “Let me just say this: We don’t pour cash into Pyongyang just to make the tours happen.”

“Yes, we do pay what you may call an ‘entrance fee’ -- from $30 to $80 per person depending on the duration of the stay -- but that’s a fraction of the tourists’ total expenses,” Sin said, adding the tourists would be spending money for tour facilities built by Hyundai Asan.

When asked whether North Korea is bluffing about demolishing existing resort facilities at Kumgangsan, Gov. Choi said, “I’m not quite sure but do know that it’s a demonstration of discontent with where the two Koreas stand now.”

“Let the leaders of the two Koreas and US discuss denuclearization. On the sidelines, we will carry on exchanges with Pyongyang. That’s how I see the resumption could get off the ground.”