[ The Korea Herald – Send E-mail ]
S. Korea ranks among top OECD member countries in treatment of cancer: data
By Yonhap
Published : Nov 17, 2019 - 13:41
Updated : Nov 17, 2019 - 13:41
South Korea ranks as one of the leading members among the Organization for Economic Cooperation and Development in the treatment of cancer, medical data showed Sunday.

The 2019 Health at a Glance report released by the Paris-based organization said Asia's fourth-largest economy had the highest five-year survival rate for colorectal, rectal and stomach cancers in the 32 member states checked, the Ministry of Health and Welfare, which examined the data, said. 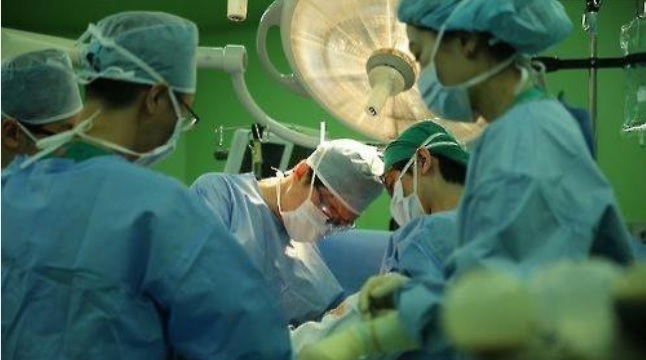 (Yonhap)
The cancer survival rate, which is a key measure of cancer treatment effectiveness, revealed the survival rate for colorectal malignant growth stood at 71.8 percent, with corresponding numbers for rectal and stomach cancer reaching 71.1 percent and 68.9 percent, respectively.

The findings based on information collected in 2017, also said that South Korea ranked third in the survival rate for lung cancer at 25.1 percent, with the average number for chronic lymphocytic leukemia at 84.4 percent, slightly higher than the 83.7 for all member states.

Besides the common types of cancer, South Korea had the third lowes 30-day case fatality rate for people admitted to hospitals for cerebral infarction or stroke, standing at 3.2 percent, much lower than the 7.7 percent average for the OECD as a whole. Similar numbers for deaths related to heart attack. however, stood at 9.6 percent, which is higher than the 6.9 percent average.

In regards to the hospitalization rate for various chronic diseases, such as asthma and diabetes, South Koreans in general received better care than others, the report said. Of 100,000 people suffering from asthma, 81 people were able to receive treatment after being admitted to hospitals, much higher than the 41.9 people for all OECD members. For diabetes, the number stood at 245.2 people in South Korea and 129 for the rest of the organization made up of developed market economies with high income.

Better treatment of chronic diseases can allow people with such conditions to live normal lives.

The ministry then said that while South Korea did well in treatment, it still had a very high rate of "polypharmacy," or people over 75 that took more than five different prescription drugs at once

It said polypharmacy for the country reached 68.1 percent, placing it No. 1 among the seven countries that submitted related data. The overall average was 48.3 percent.

Data showed that the prescription of opioids and other anti-psychotics were low, although the use of antibiotics was high, reaching 26.5 defined daily doses per 1,000 people in 2017. DDD is a standard measure of drug consumption, with South Korea ranking 29th among 31 countries that provided numbers in the antibiotics field in the one-year period.

On the issue of medical service provided by the country, over 80 percent of outpatients said they were satisfied with treatment time and explanations provided by doctors.

The ministry said that the latest findings showed general improvements in the level of medical attention provided by the country with changes needed in its tendency to overuse antibiotics that can pose serious health-related problems down the road. (Yonhap)