[ The Korea Herald – Send E-mail ]
Unification Ministry denies claims of deporting North Koreans illegally
By Park Han-na
Published : Nov 11, 2019 - 15:38
Updated : Nov 11, 2019 - 21:10
The Unification Ministry on Monday denied that two North Koreans were returned to the North unlawfully, saying they were not entitled to protection due to the serious nature of their crimes.

“The two North Koreans are not subjected to protection under the North Korean Refugees Protection and Settlement Support Act, as they are ‘nonpolitical’ serious criminals and their acceptance as refugees could pose a danger to the lives and safety of citizens here,” Lee Sang-min, the ministry’s spokesperson, told reporters at a regular briefing. 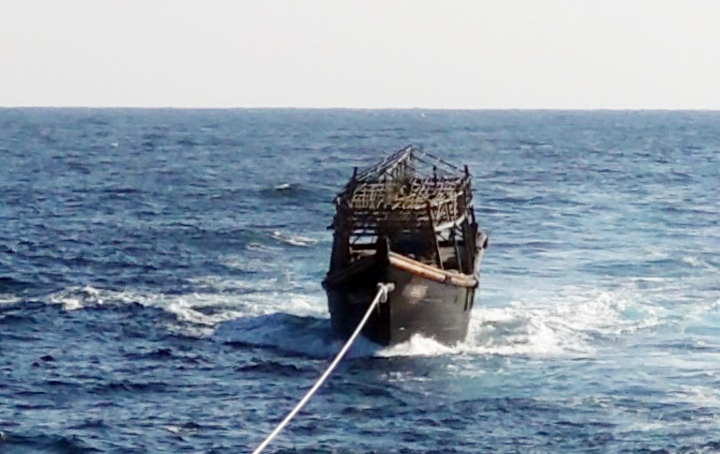 The South Korean Navy tows a North Korean wooden boat to the North on the East Sea, Nov. 8. (Yonhap)

The South Korean government decided to deport two North Korean fishermen who entered South Korean waters on a fishing boat after they were found to have killed 16 fellow crew members on their boat.

On Thursday, the two North Koreans in their 20s were sent back to the North via the inter-Korean truce village of Panmunjom, five days after they were caught near the eastern sea border while fleeing authorities.

Eighteen rights groups, including the Transitional Justice Working Group and the Committee for Human Rights in North Korea, released a statement condemning the South Korean government’s “forceful and illegal” deportation of the North Koreans without a thorough investigation.

“The North Korean people who have set foot on the territory of South Korea should have been given the opportunity to get attorney counsel and identify criminal liability issues,” they said in the statement.

The groups urged the National Assembly to investigate and called on the North Korean authorities not to punish the two deported fishermen with torture or the death penalty.

It was the first deportation of North Koreans by the South since the 1953 Korean War Armistice, as it typically accepts North Koreans as defectors if they want to settle here and repatriates those who want to return home.

The North Koreans told authorities here that they hoped to defect but the government turned down the request in the belief that they had crossed into the South only to flee arrest on murder charges.

In a joint investigation, the ministry said last week, the two men confessed that they and another crew member had conspired to kill the captain and killed 15 colleagues to cover up the crime while they were fishing for squid in Russian waters.

Given the circumstances, the ministry said it had consulted closely with other related government agencies, brushing off media reports that the presidential National Security Office had made the decision unilaterally.

Regarding a news report that the two North Koreans only realized they were going to be sent back to the North when their eye patches were removed at Panmunjom, Lee said the ministry couldn’t verify the escort process.