[ The Korea Herald – Send E-mail ]
[Weekender] Tea ceremony that draws young sippers
Learning art of dado at sanctuary-like matcha place
By Im Eun-byel
Published : Oct 25, 2019 - 10:23
Updated : Oct 25, 2019 - 10:23
Though the word “dado,” meaning a traditional tea ceremony, may not sound like much fun, it has become a trending practice among young people here, as they seek inner peace and Instagram-worthy shots at the same time.

More tea shops are opening across Seoul, branding themselves as cultural complexes that offer more than just a cup of tea. Teaching the art of dado, they offer extra activities such as public lectures, yoga classes and more.

One of the highly sought-after tea places is Matchacha in Seongsu-dong, eastern Seoul. Located next to the Seoul Forest, the tea shop introduces matcha, powdered green tea.

The cafe features a chic gray “less is more” interior. It has a wide and sleek tea bar, which can accommodate up to six people at a time, and six patio seats looking out into the forest.

A set tea course is available by reservation, priced at 30,000 won. The course starts out with a simple cup of tea, made with organic wild tea leaves, followed by a cup of classic matcha. The set course is paired with dasik, or small desserts.

Guests can whip matcha -- a practice called “gyeokbul” -- themselves, using a chaseon, a small wooden utensil shaped like a French whisk. Gyeokbul seems to be easy, but surprisingly needs delicate, snappy wrist movements. If whipped in the right manner, a light green foam forms on the surface. 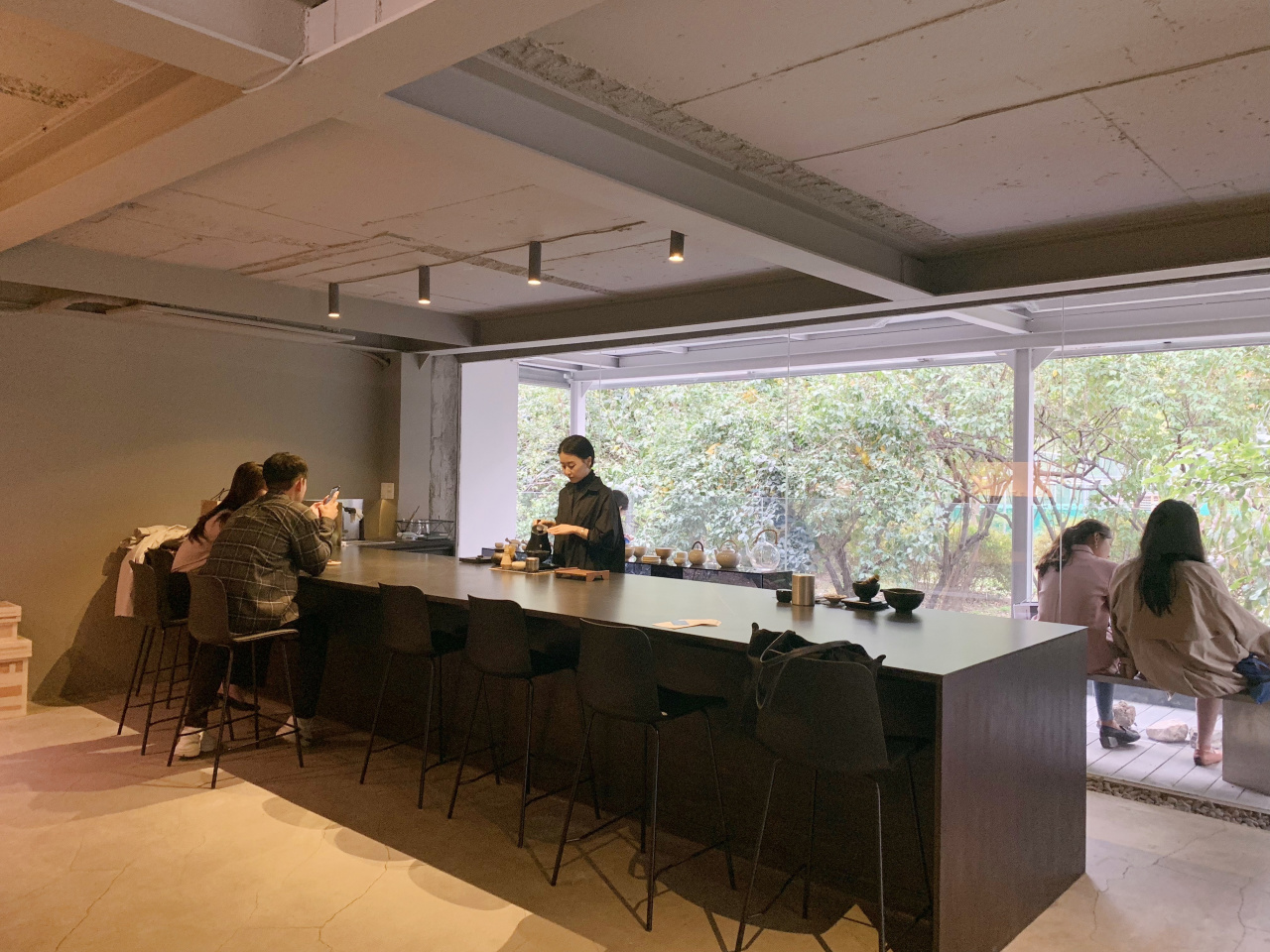 Matchacha is located next to Seoul Forest in Seongsu-dong, eastern Seoul. (Im Eun-byel/The Korea Herald)
When drinking tea, one should not gulp down the drink like coffee. Instead, it is recommended to focus on the texture of the teacup, feel the weight of the cup, notice how the arm moves, absorb the scent of the tea and appreciate the taste. 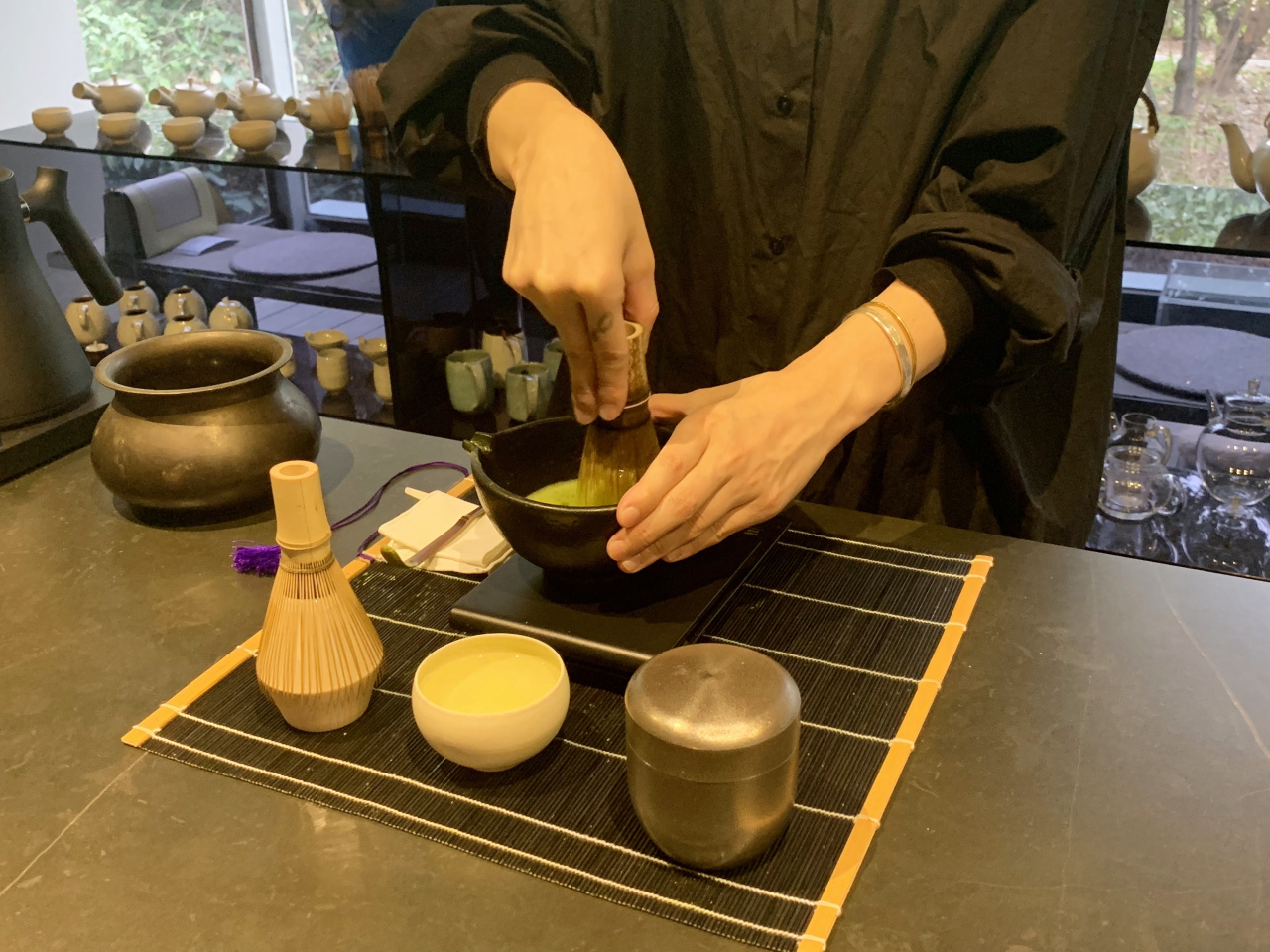 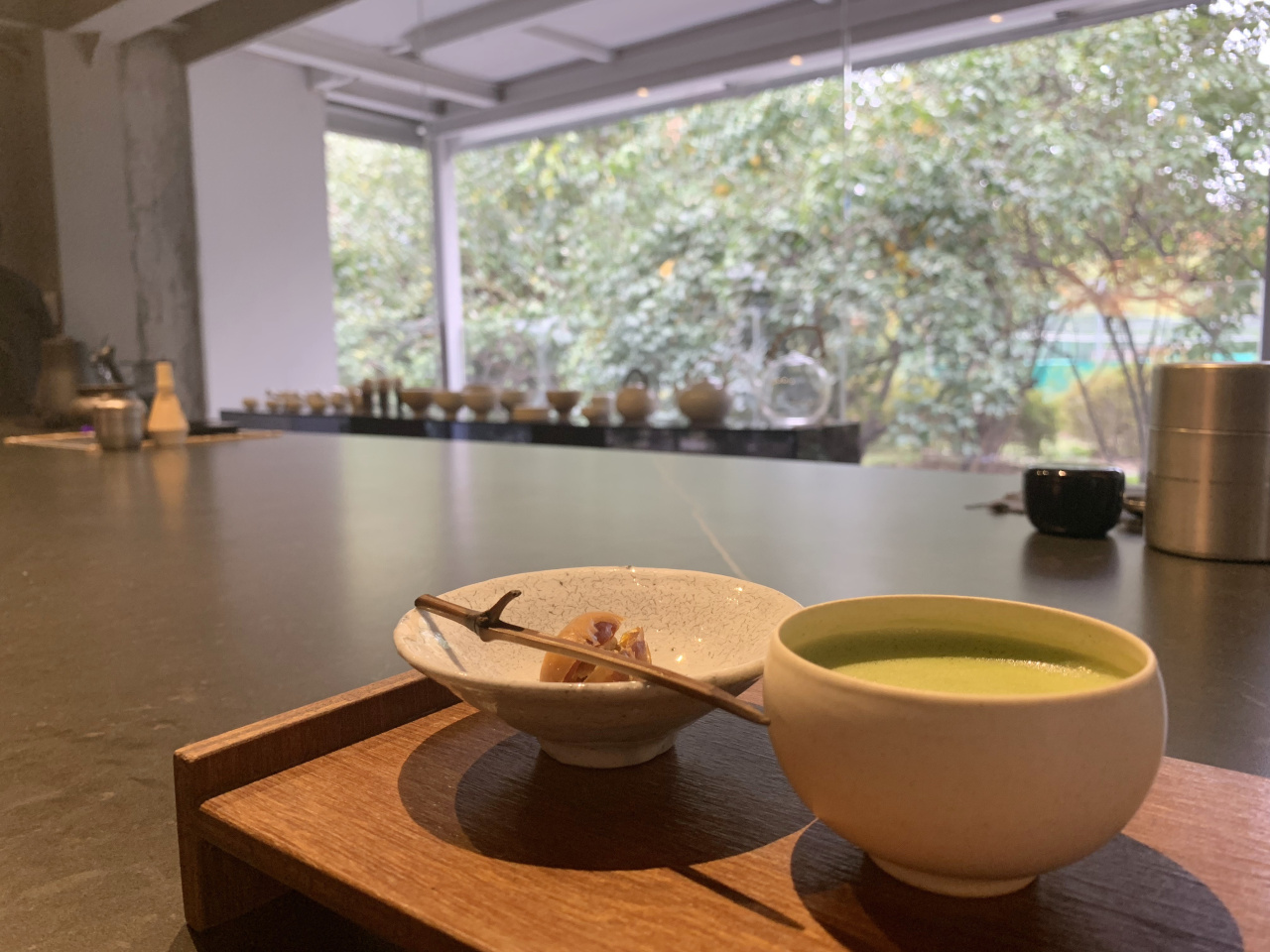 If powdered finely, the matcha taste becomes smoother. Larger matcha particles create a stronger taste. (Im Eun-byel/The Korea Herald)
For those searching for a more in-depth tea-learning experience, the cafe offers classes as well. Tea classes, priced at 60,000 won, are led by owner Lee Ye-ni herself, and can be conducted in English. Though similar to the tea course in essence, Lee showcases the special tea ceremony practice during the 90-minute class, exchanging long conversation with guests.

Lee fell in love with matcha during a trip to Japan a decade ago. Studying in New York, she witnessed the high popularity of Japanese matcha. Hoping to export good Korean tea, she founded Matchacha, though she has since focused more on running the cafe.

Unlike other cafes, Matchacha asks for silence from guests. Of course, it’s not a complete library silence, but still, guests whisper to one another as the space is quiet overall.

Matchacha looks out at Seoul Forest through large windows. From late spring to early fall, the windows are filled with the greenery of the forest.

The second floor of the cafe is dedicated to workouts, as Matchacha is all about having a healthy mind and body. Single-session yoga class Green Mind Body takes place from time to time. Attendees can practice their cobra pose while looking over the Seoul Forest.

After practicing Vinyasa Flow for an hour with yoga instructor Kim Bu-jin, owner Lee leads attendees for a petit matcha ritual as a cool-down. Attendees can leave the space having fully filled themselves with green energy.