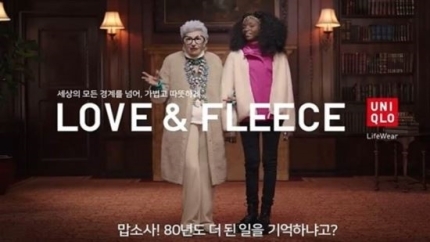 (Uniqlo)
The 15-second advertisement features 97-year-old style icon Iris Apfel and 13-year-old fashion designer Kheris Rogers in conversation. In the ad, Rogers asks Apfel how she dressed when she was her age. Apfel responds, “I can’t remember that far back.”

The version that aired here had Korean subtitles reading “Oh my god, how can I remember what happened more than 80 years ago?” -- a different translation from what was originally said in the ad.

The addition of “80 years ago” in the Korean subtitle was denounced as intending to ridicule Koreans who were forced into sexual servitude and labor 80 years ago during Japan’s 1910-45 colonial rule of the Korean Peninsula.

The ad, which began running Tuesday on Korean television, was pulled from its official YouTube account and public TV broadcasts on Saturday, according to Uniqlo.

“The advertisement in question is a part of global advertisement series to mark the 25th anniversary of fleece and it has no links to any political or religious agendas, belief or organizations, but we decided to stop airing the ad as we take it seriously that many people felt uncomfortable,” the fashion retailer said.

The popular apparel brand initially dismissed the criticism as a “rumor,” saying it had no intention of targeting a country or its historical background. The subtitle only attempted to stress the two models’ age difference, Uniqlo said in a statement Friday.

The ad enraged some Koreans, many of whom had already joined a boycott of Japanese goods amid the diplomatic spat between Korea and Japan.

A one-person protest organized by a labor rights group was held in front of a Uniqlo store in Busan on Saturday.

Parody videos with subtitles in Korean, English and Japanese also appeared, starring Yang Geum-deok, an 89-year-old victim coerced into labor at a steel mill in Japan, and a 25-year-old student majoring in history at Chonnam National University.

In the videos produced by the student, Yoon Dong-hyun, Yang holds a placard reading “Not forgotten” in Japanese. As Yoon asks her how difficult her life was at his age, Yang says “I cannot forget the horrendous pain forever” in Korean.

It is not the first time Uniqlo has come under fire in Korea.

In July, Uniqlo parent company executive Takeshi Okazaki said he thought that the impact of a boycott of Japanese goods would not last long, which added fuel to Koreans’ anger about Japan and led the company to apologize.

Korea-Japan relations have been chilly in recent months after rulings by Korea’s Supreme Court last year that ordered Japanese companies to compensate Koreans forced into labor. Tokyo says the matter was settled by the 1965 treaty normalizing bilateral ties.

In an apparent act of retaliation, Japan tightened controls on exports to Korea and removed it from a list of favored trading partners, which led to Koreans boycotting Japanese goods and services. The Korean government also withdrew from a bilateral military information-sharing deal.