[ The Korea Herald – Send E-mail ]
[News Focus] President’s detractors cite economy as No. 1 reason
But Moon supporters say prosecution reform is main factor: poll
By Kim Yon-se
Published : Oct 20, 2019 - 17:15
Updated : Oct 20, 2019 - 17:56
SEJONG -- Over the past year or more, South Koreans who told pollsters they did not support President Moon Jae-in most often pointed to the economy as the main reason.

A large portion of those dissatisfied with the incumbent administration have said it is incapable of dealing with economic issues and improving ordinary people’s livelihoods.

To some extent, their disappointment is backed up by sagging indices in areas such as employment, GDP growth, exports, labor costs, the value of the currency, stock prices, gasoline prices and business sentiment.

Surveys show that the percentage of people with an upbeat outlook on the economy is smaller than that of Moon supporters. This indicates that even among the president’s supporters, not all of them are optimistic about current economic conditions. 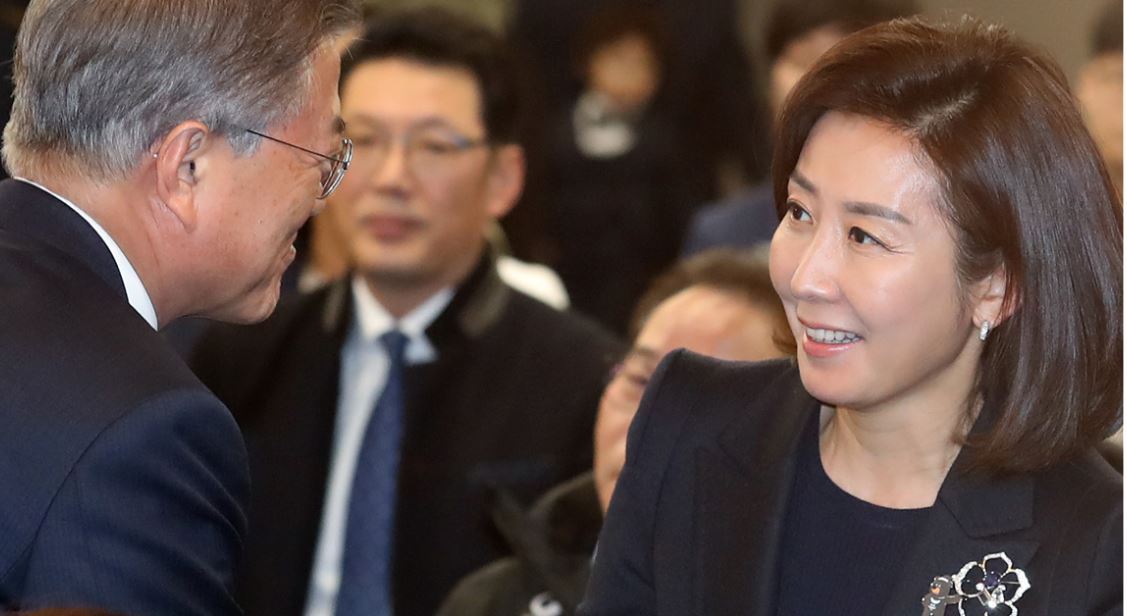 President Moon Jae-in (left) shakes hands with Rep. Na Kyung-won of the right-wing Liberty Korea Party (now the party floor leader) during an event to encourage South Korean athletes preparing for the PyeongChang Paralympic Winter Games on March 2, 2018, in Seoul, a week before the opening ceremony. (Yonhap)
But for a few weeks between August and early October, among those who expressed disapproval of Moon in Gallup Korea polls, it was the administration’s personnel policies that topped the list of reasons, outstripping concerns about the economy.

This was attributable to the scandal surrounding Cho Kuk, who served as justice minister from Sept. 9 to Oct. 14, after being nominated as the minister candidate by the president on Aug. 9.

But now pessimists on the economy are again pointing to economic affairs as the primary reason they do not approve of Moon, the latest survey shows.

According to the poll, conducted Oct. 15-17 by Gallup Korea and made public Oct. 19, a quarter of those who expressed skepticism toward President Moon criticized his economic performance, the most popular answer. His personnel policies were next on the list, with 17 percent of his detractors choosing it, followed by a criticism that he was “dogmatic and biased” from 13 percent of his detractors.

Other critics said they disliked Moon for “overall incompetence” (8 percent), for “causing social conflicts” (7 percent), for “North Korea-focused policies” (5 percent) and for his diplomatic policies (3 percent).

A noteworthy point about the poll is that even Moon’s advocates were hesitant to speak highly of his economic performance.

Only 2 percent of those who said they supported Moon picked his economic performance as the reason. Further, just 1 percent of the supporters said his job creation policies were the No. 1 factor in their support.

The top two reasons for supporting Moon were his prosecution reform drive, cited by 15 percent of his supporters, and his diplomatic performance, cited by 11 percent. 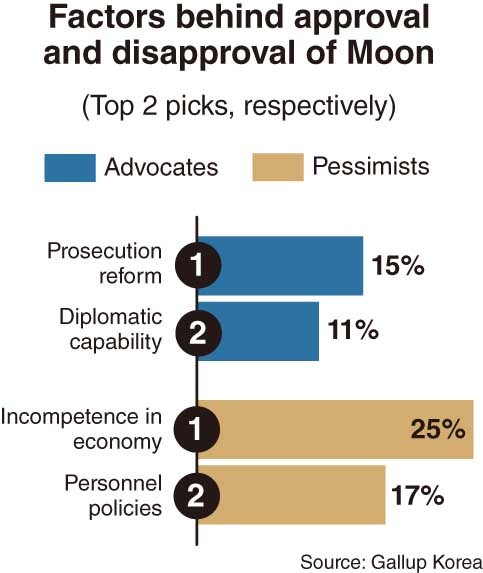 (Graphic by Kim Sun-young/The Korea Herald)
Past polls, so far, have shown that more than 50 percent of the nation favors revamping the prosecution, a move that would involve creating an independent agency to investigate -- and possibly indict -- prosecutors and other public officials implicated in criminal acts.

Out of the 1,000 people surveyed, Moon critics outnumbered advocates by 531 to 390, which pulled down the president’s approval rating fell to 39 percent. It marked an all-time low among the weekly surveys by Gallup Korea since May 2017.

Looking at poll respondents’ occupations, the president’s approval ratings were lowest among retirees and jobless citizens at 24 percent, followed by homemakers at 28 percent and self-employed citizens at 30 percent.

In a similar vein, a poll from SA Consulting, released Oct. 8, showed that the majority of Koreans were gloomy about the economy.

The percentage of pessimists (very gloomy plus gloomy) was highest among those in their 50s at 63.5 percent (40.8 percent picked very gloomy, and 22.7 percent gloomy, in the generation).

A large portion of self-employed people in their 50s, as well as those in their 40s, are thought to have been hit by a spike in labor costs during Moon’s term.