[ The Korea Herald – Send E-mail ]
[Newsmaker] Up to 27 coal power plants to be shut down December to March to curb pollution
By Ock Hyun-ju
Published : Sep 30, 2019 - 16:02
Updated : Sep 30, 2019 - 21:26
A national anti-fine dust body suggested Monday that the government enforce stronger measures to curb hazardous particulate pollution, such as by shutting down coal power plants and restricting old diesel vehicles from December to March next year.

The National Council on Climate and Air Quality suggested a seasonal dust management system, under which a crackdown on illegal emissions is toughened, up to 27 coal power plants are shut down in spring and over 1 million aged diesel vehicles are restricted from cities during the four-month period. 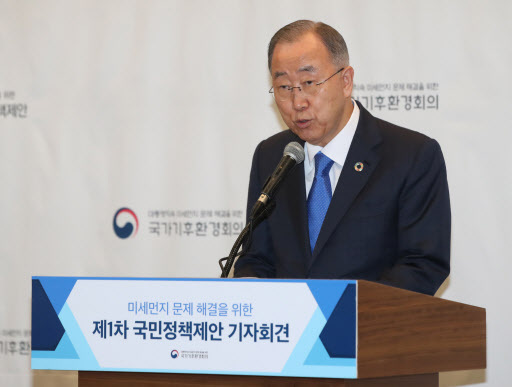 (Yonhap)
The council expects the related bill to pass before December with bipartisan support.

After five months of discussions, the council under the presidential office, which comprised 130 experts and 500 citizens, announced the policy initiative aimed at reducing domestic emissions of PM 2.5 -- ultrafine particles smaller than 2.5 micrometers in diameter -- by 20 percent.

Typically, high levels of PM 2.5 blanket South Korea from autumn through spring. Korea ranked lowest in air quality among the 36 member states of the Organization for Economic Cooperation and Development in 2017.

The proposals center on cutting back domestic emissions of ultrafine dust particles in seven sectors, including industry and transport, though China is believed to be a major source of toxic pollutants over the Korean Peninsula.

The council’s suggestions aim to reduce 11,993 tons of ultrafine dust emissions in the industry, which account for 41 percent of the country’s total emissions, by dispatching inspection teams to clamp down on illegal emissions.

The council also suggested that nine to 14 coal power plants be shut down from December to February, and 22 to 27 plants be suspended in March. Coal power plants generate 12 percent of the country’s ultrafine dust. The closures could lead to an average 1,200-won ($1) hike in the monthly electricity bill for a four-member household over the period, the council said.

In the transportation field, aged diesel vehicles will be banned from cities with populations of more than 500,000.

The suggestions also include plans to share information on dust forecasts and engage in joint projects with China under a partnership to fight particulate pollution.

“Some people would say the measures are excessive, but these measures are necessary to resolve the particulate pollution problem that is a social disaster,” Ban Ki-moon, former United Nations secretary-general and head of the council, said at a press conference Monday.

A long-term comprehensive plan to combat particulate pollution will be announced in the first half of next year, according to the council.