At the start of the meeting, Moon credited the IOC for playing a critical role in last year’s PyeongChang Winter Olympics with North Korean participation, requesting Bach’s support in hosting the Summer Olympics in 2032 jointly with North Korea.

“We will actively participate and try to make the relay of Olympics in East Asia that started with the Winter Olympics in PyeongChang last year, to next year’s Tokyo Olympics and 2022 Beijing Olympics into an arena of harmony. We want to bring about a successful dialogue that leads to shared prosperity in East Asia,” Moon said. 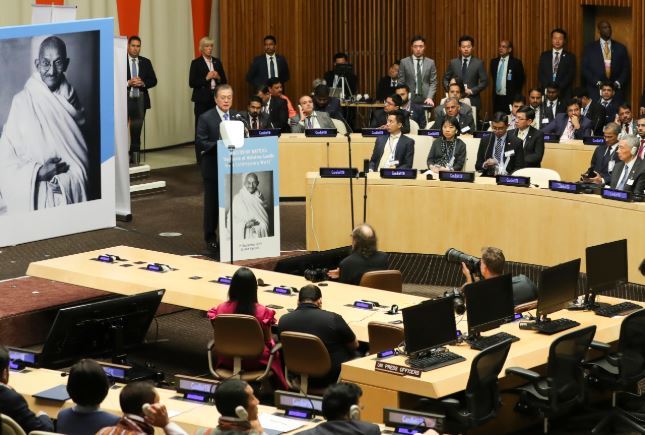 President Moon Jae-in speaks during a ceremony at the United Nations in New York on Tuesday to celebrate the 150th anniversary of the birth of Mahatma Gandhi, the leader of India's nonviolent independence movement against British rule. (Yonhap)
“We hope that the peace that started in PyeongChang last year will continue to the 2032 joint inter-Korean Olympics. I ask you and the IOC to help realize (the goal).”

The two Koreas plan to cooperate in a bid to host the summer games in 2032. It is included in the joint declaration issued after Moon’s third meeting with North Korean leader Kim Jong-un in Pyongyang in September 2018. The declaration also includes a clause stating that the both countries will field joint teams for next year’s Tokyo Summer Olympics and other international sporting events.

According to Cheong Wa Dae pool report, Bach promised the IOC’s support, saying that contributing to peace is a mission of the organization.

On Tuesday, Moon held a summit meeting with Australian Prime Minister Scott Morrison where the two leaders expressed hopes for stronger bilateral ties and cooperation in a wider range of fields.

“The friendship between the two nations has led to active economic exchanges, and advanced into a relationship of cooperation in energy resources and infrastructure,” Moon was quoted as saying by Cheong Wa Dae spokesperson Ko Min-jung.

“I hope for the cooperation to widen to defense, hydrogen economy and mineral ores, so that (the bilateral relationship) can become a true partnership.”

In his opening statement, Morrison also expressed hopes for further cooperation between the two nations in a wide range of fields, including science, defense and business.