Prosecutors raided Justice Minister Cho Kuk’s home for 11 hours from 9 a.m. Monday, an unprecedented move that raised questions on the possibility of a biased probe as well as the propriety of Cho keeping the post.

The raid at the minister’s home, initially expected to last an hour or two, continued for 11 hours, reportedly after the Cho family’s lawyer took issue with the scope of the search warrant, which then had to be reissued from the court.

The prosecution secured from Monday’s search and seizure the Cho family’s computer hard disk drives, which contained a set of documents that may indicate the minister’s direct involvement in the alleged rigging of his child’s college admissions process.

In the hard drives, the prosecutors found internship certificates dated 2009, believed to have been fabricated for the minister’s then-high school student daughter Cho Min.

While the internship certificates appear to be issued under a Seoul National University law center’s name, the center told the National Assembly earlier this month that no high school student had interned in the years leading to and after the date the certificates were issued. Cho was on the university’s law faculty at the time. 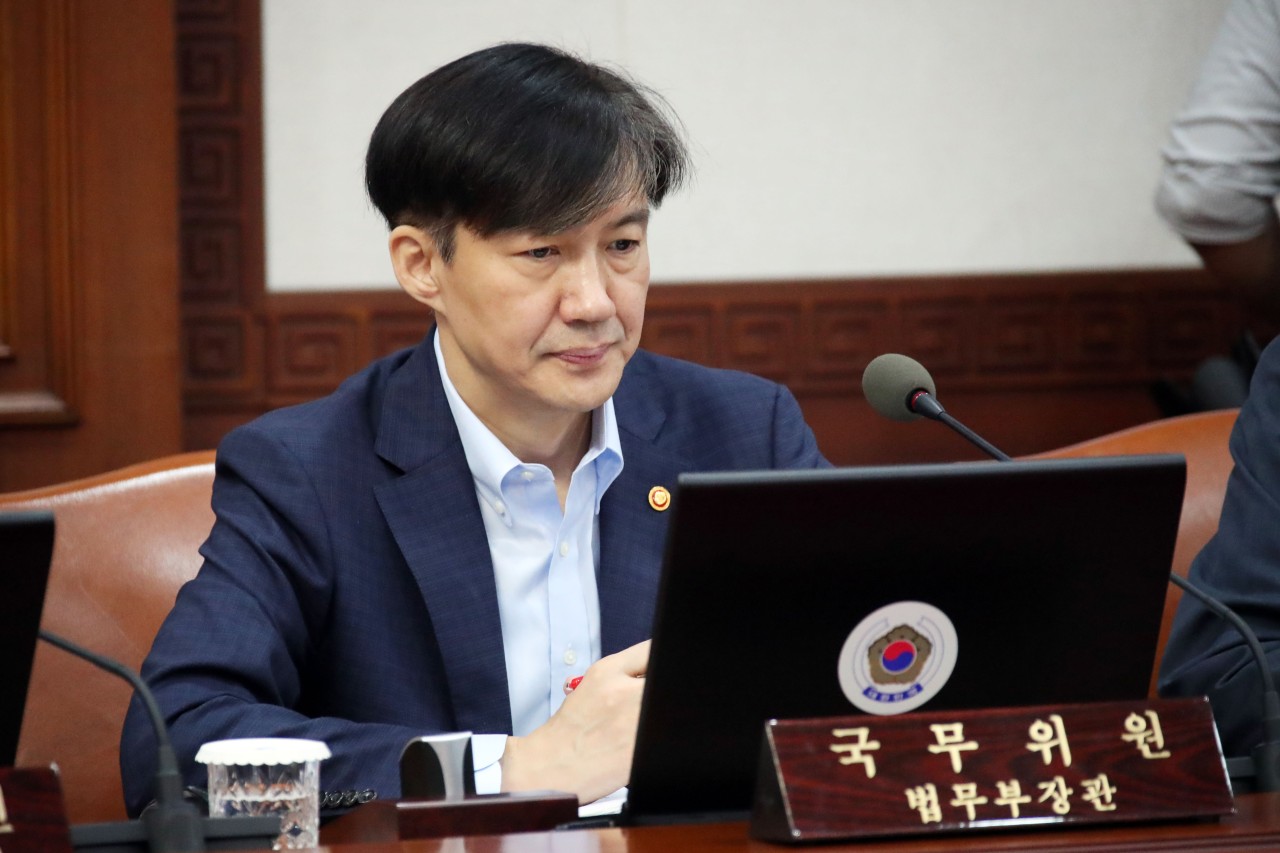 The ruling Democratic Party of Korea on Tuesday said it would review filing a complaint against the prosecution for publicizing criminal suspicions surrounding the minister before guilt is proven.

Democratic Party Vice Floor Leader Rep. Lee Won-wook said during a house meeting, “announcing a suspected offense is illegal even under the current law,” and that the party would consider “filing a formal complaint against the prosecution for gross misconduct.”

Cho had said last week the implementation of measures regulating release of criminal suspicion information -- a revised press policy proposed by his predecessor former Justice Minister Park Sang-ki -- would be held off until a probe on his family is finalized.

“But that doesn’t mean the prosecution can indulge in the existing convention and publicize information on the ongoing probes,” the vice floor leader said.

“It is a shame prosecutors aren’t able to substantiate any guilt, even after a month,” he said.

The main opposition Liberty Korea Party filed an injunction with the Constitutional Court to suspend Cho from performing his ministerial authority after Monday’s raid.

The conservative party said in a press release the injunction had been requested on grounds of “ensuring the prosecution’s fair probe of the minister, who is virtually a suspect at this point.”

“If Cho were to hold onto his post -- as a direct superior to the prosecutors -- it would severely hinder the prosecutors’ ability to execute a probe unimpeded.”

The opposition also pointed out the minister’s repeated pledge to reduce the prosecution’s investigative authority and handing jurisdiction over to police.

“The Justice Ministry had proposed excluding Prosecutor General Yoon Seok-youl from the probe on Minister Cho’s family, immediately after he assumed office,” the party said. “It is not a stretch to interpret the ministry’s moves as efforts to keep the prosecution in check.”

Meanwhile, Cho, saying he has “come to understand how citizens who have been subjected to forced investigation must have felt,” reaffirmed his “resolution to carry through (his) duty as justice minister,” which he said is to “pursue reform of the prosecution, as well as within the Justice Ministry.”

The home raid came after a testimony by a Korea Investment & Securities Co. banker surnamed Kim, who worked as the Cho family’s assets manager for five years. He told prosecutors that he had been called in to the minister’s residence to replace the storage devices in the computers on Aug. 29.