[ The Korea Herald – Send E-mail ]
South Korea, US begin defense cost-sharing talks
By Park Han-na
Published : Sep 24, 2019 - 16:55
Updated : Sep 25, 2019 - 17:46
South Korea and the US have initiated talks to decide how much Seoul will pay for the upkeep of the US troops stationed here for 2020 and possibly beyond, the Ministry of Foreign Affairs said Tuesday.

As the current deal expires at the end of this year, the two countries are required to negotiate the 11th Special Measures Agreement, the defense cost-sharing pact that sets forth how much is required from each side to maintain the 28,500 US troops. 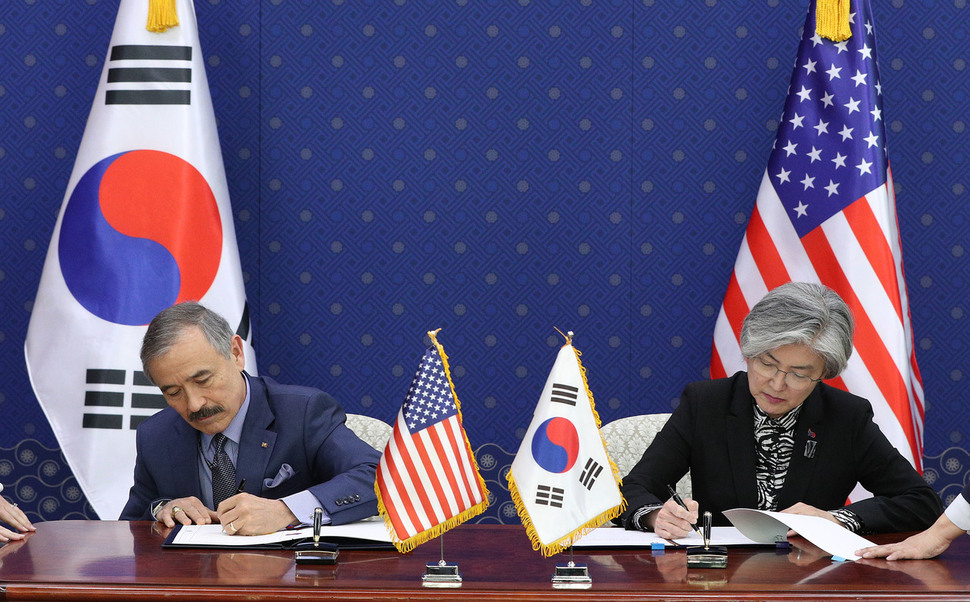 
James DeHart, a former charge d’affaires of the US Embassy in Norway, arrived in Seoul for the talks Tuesday and Wednesday with Chang Won-sam, the chief negotiator for the 10th SMA. Chang is temporarily leading the talks for the Korean side because the government has yet to announce a new chief negotiator. Jeong Eun-bo, former vice chairman of the Financial Services Commission, is one of the names being floated as a likely choice. Chang, named consul general in New York, is expected to take office in November.

Lee Sung-ho, former deputy ambassador to the Organization for Economic Cooperation and Development, was tapped as deputy head of the Korean delegation to the talks.

“During the meeting, we explored the respective positions. The US side expressed their expectations and principles, and we revealed our stance,” Lee told reporters after the talks, which lasted over six hours. He added that the delegations shared the goal of striking the deal by the end of the year.

Officials from the foreign, finance and defense ministries accompanied Chang in the meeting. On the US side, officials from the State Department and the Pentagon took part in the talks, the Foreign Ministry said.

In March, the two countries signed a deal valid for one year. Under the deal, Seoul agreed to pay 1.04 trillion won ($870 million), an increase of 8.2 percent from the previous year.

Via his tweets and public speeches, US President Donald Trump has signaled on multiple occasions that there should be a substantial hike in Seoul’s contribution.

Previously, some media reports said the US had requested that Korea pay as much as $5 billion, which would amount to almost a sixfold increase over this year.

Since 1991, the SMA agreement has been renewed every three to five years. But Washington demanded shortening the agreement period to one year for the 10th SMA, which sparked speculations that the US may want to continue to keep it as a one-year contract in order to hike the cost every year.

President Moon Jae-in, who held a summit with Trump in New York on Monday, stressed the importance of sharing defense costs at levels that are “fair” and “reasonable.”

Moon also explained in detail how much the Korean government contributes to supporting the Korea-US alliance and the US troops stationed here, mentioning the increasing costs of the country’s own defense budget as well as US weapons purchases.

Before the bilateral summit, Trump said Korea was one of the largest purchasers of US military equipment.