Defense Minister Jeong Kyeong-doo said Friday that threats in cyberspace posed by North Korea and other entities have been growing and vowed efforts to bolster the country's cyber operations capabilities.

Jeong made the remark during a conference on defense cybersecurity held in Seoul earlier in the day.

"Even at this moment, cybersecurity threats are increasing from all directions, as North Korea and other unidentified forces continue to launch attacks," Jeong said, calling them a transnational menace, along with terrorism and natural disasters. 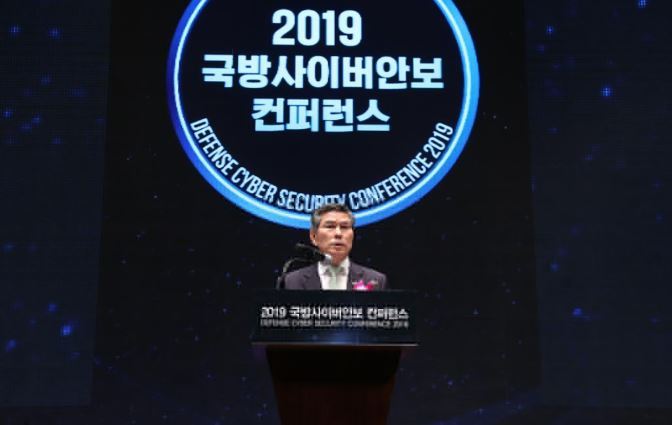 (Yonhap)
"North Korea is believed to be continuing its efforts to strengthen such capacities by nurturing professionals and by conducting research and development into the latest technologies," he added, referring to Washington's recent move to sanction three entities accused of conducting cyberattacks on behalf of North Korea.

In the face of growing threats, South Korea last year revamped the country's cyber command, renaming the unit the Cyber Operations Command and designating it as an entity under the direct control of the chairman of the Joint Chiefs of Staff in order to enhance its military operational focus.

"In order to further strengthen our cybersecurity capabilities, we will continue diverse efforts, such as boosting the efficiency of the cyber command and control system, cultivating more professional manpower and beefing up our defense posture in cyberspace," Jeong said.

The one-day conference, organized jointly by the ministry and cyber command, brought together 500 civilian experts and military officers from home and abroad, and discussed ways to boost capabilities to better brace for evolving security threats in cyberspace, according to Jeong's office.

According to a recent report by UN experts to the Security Council, the international organization is investigating at least 35 cyberattack cases in 17 countries allegedly committed by North Korea to fund its weapons of mass destruction programs.

South Korea was the most frequently attacked victim and was involved in 10 cases. (Yonhap)