Lawyers for a Democratic Society, more widely known by the Korean acronym Minbyun, staged a protest outside the National Human Rights Commission of Korea headquarters, accusing it of “deliberately equivocated account on ‘the waitresses case.’” 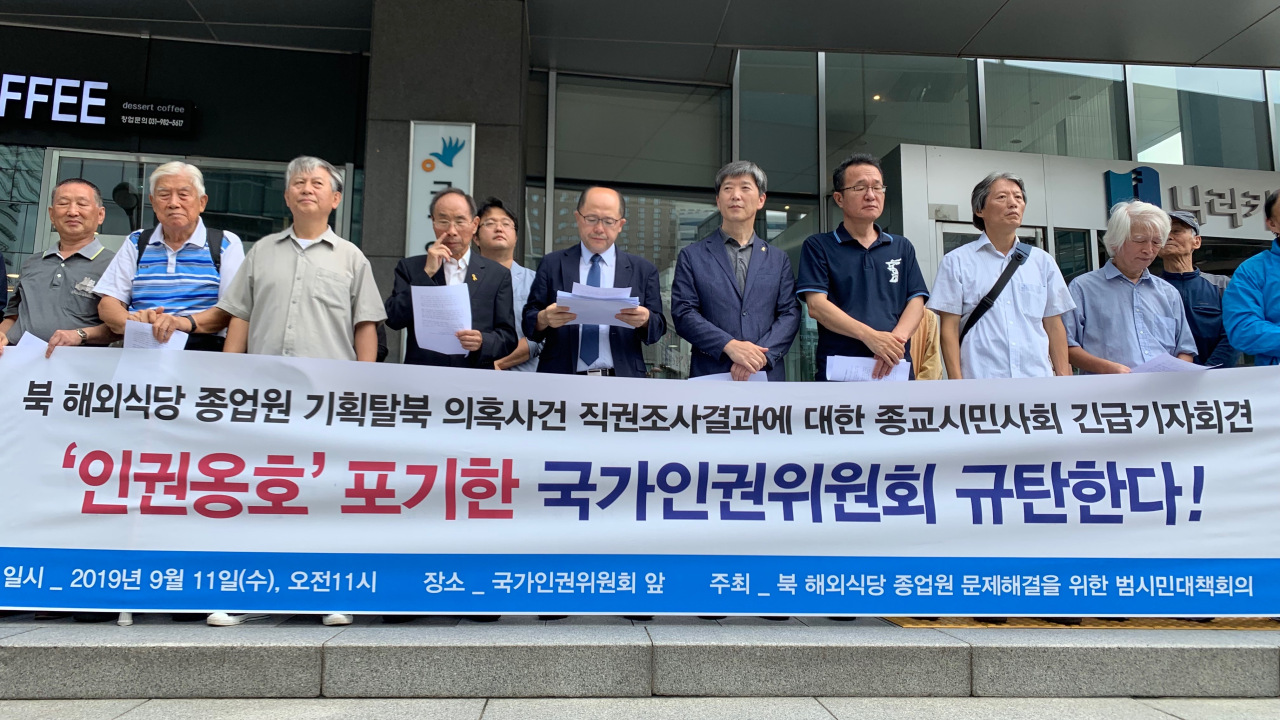 Activist lawyer group Minbyun stages protest outside National Human Rights Commission headquarters in Jung-gu, Seoul, Wednesday. (Kim Arin/The Korea Herald)
In a report submitted Monday, the commission dismissed Minbyun’s complaint that the government intervened in the case regarding 12 North Korean women who entered South Korea in April 2016. The commission said it found no evidence of state intervention, but questioned the Unification Ministry for releasing information about the defection.

“The human rights commission contributed to the investigation’s delay, and played a part in concealing the case,” said Jang Kyung-wook, a lawyer leading Minbyun’s response to the case.

Jang said the commission was using Heo Kang-il -- the restaurant’s manager who supervised the waitresses -- as a scapegoat to avoid accusing the government.

“If the commission believes the suspicions it raised against Heo, it should have filed the case with prosecutors who have investigative rights,” he said.

According to Minbyun, Heo had previously told the group the waitresses were abducted to South Korea, as opposed to voluntary defection, and that the intelligence agency had orchestrated it.

“The NHRCK has failed as an independent institution. It is apparent the commission places protection of the government’s interests above its duties to human rights violation victims,” Jang said.

He also accused the commission of “hiding from the media” and “communicating the results of its own probe through Minbyun.”

Cha Seung-ryul, an investigator at the commission who handled the case, told The Korea Herald it was “inappropriate to release the probe findings for diplomatic relations (with North Korea) and other security reasons.”

Asked to what extent the commission report was publishable, a communications officer at the commission said the content of the probe has been shared with the petitioner and related parties, and not made public to protect the victims.

In response to Minbyun’s claim that the commission played a role in putting off the investigation, Cha said the commission had formally asked the prosecution to “expedite the probe into the mass defection of North Korean restaurant workers.” He added that the commission did not have the authority to file charges against individuals, including Heo.

Cha said the commission found there was a possibility some of the North Korean women came here unknowingly or unwillingly, but that there was more evidence to suspect the restaurant’s manager than state institutions.

On April 8, 2016, the Unification Ministry under the Park Geun-hye administration announced the North Korean women’s defection to South Korea, breaking the usual protocol of keeping such information discreet. The 12 women, who were employees at a restaurant in Ningbo, China, arrived here with their manager Heo.

Seoul at the time said the women willingly defected, but in a 2018 televised interview, five women claimed they were abducted.