But the situation is still bleak when it comes to the comparison with the 36 members of the Organization for Economic Cooperation and Development, which measures employment as a proportion of the working age population -- those aged between 15 and 64. 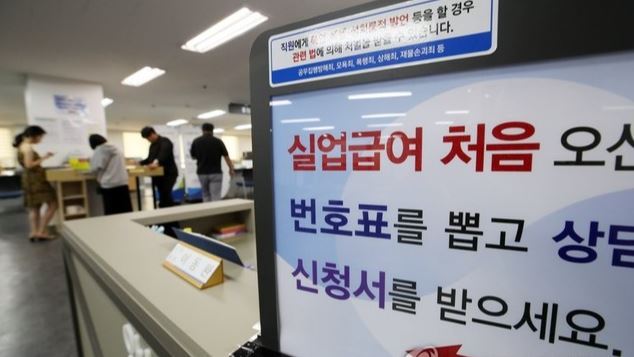 A manual board, offered by a regional office of the Korea Employment Information Service, informs visitors of the process to apply for the state-led unemployment benefit. (Yonhap)
In the latest data held by the OECD, South Korea ranked 28th out of the 36 OECD countries in terms of this employment rate, with 66.7 percent as of June 2019.

The US and Portugal also stayed above the average with 71.1 percent and 70.2 percent, respectively. These international comparisons were based on employment figures from the second or first quarter of 2019, according to reports from each members. 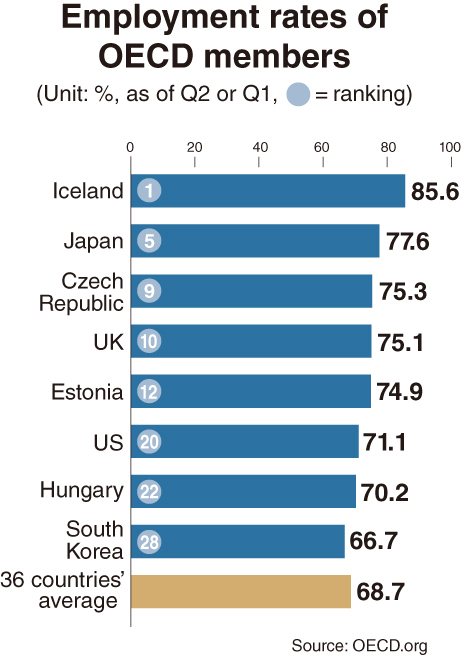 Figures for the US and Japanese young workers came to 51.1 percent and 47.3 percent, respectively. Mexico and Turkey posted 41.9 percent and 34.2 percent for the 15-24 aged generation.

Formerly, in its recent economic outlook on some member countries, the OECD forecasted a 4 percent jobless rate for South Korea in 2019.

This indicates that the unemployment rate may touch the 4 percent mark for the first time since it posted 4.0 percent in 2001.

The OECD cited the drastic hike in the statutory minimum wage, manpower restructuring among manufacturers and the drop in the number of the people for production activities, aged between 15 and 64, as major factors holding back employment.

The Paris-based organization pointed out that the sharp hike in the statutory minimum wage could burden employment and the growth of gross domestic product.

Though the nation’s jobless rate inched down to 3.9 percent in July, the figure ranged between 4.0 and 4.7 percent for the first six months of the year.

In addition, the number of unemployed people stayed above 1 million for the seventh consecutive month. While the number was 940,000 as of December 2018, it has climbed to 1.1 million as of July 2019.

The nation’s employment situation turns critical when it refers to the Supplementary Index III for Employment, provided by Statistics Korea. The index refers to the extended (or sentiment-reflected) jobless rate, which reflects underemployment as well as unemployment.

People deemed to be among the “extended jobless” include temporary employees who work fewer than 36 hours a week and want to work more hours, as well as seasonal workers who are out of work for part of the year.

About two years ago in November 2016, the extended jobless rate -- stood at 9.8 percent, according to Statistics Korea.

Further, the extended jobless rate for those, aged 15 to 29, was 23.8 percent as of July. This means that nearly 1 in 4 young Koreans have been out of work.