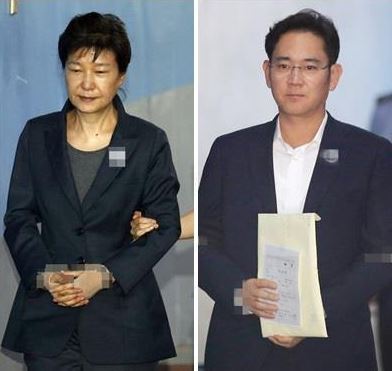 Oct. 30: Choi is detained after returning home after weeks of apparently hiding in Europe.

Nov. 8: Prosecutors raid offices of Samsung Electronics Co. on suspicions of offering bribes to Choi and, in effect, to the president.

Nov. 30: Prosecutor-turned-lawyer Park Young-soo is appointed the special counsel for the case.

Dec. 6: The National Assembly hearing begins on the corruption scandal.

Jan. 3: The Constitutional Court holds its first hearing in the impeachment trial.

March 10: The Constitutional Court upholds the parliamentary impeachment of Park with a unanimous decision, immediately removing her from office.

March 21: Park is questioned by state prosecutors over the scandal for the first time.

March 31: A court issues a warrant for the arrest of Park. She is placed in custody at a detention center just south of Seoul.

May 23: A court begins the criminal trial of Park.

Oct. 16: Park rejects the trial in protest at her treatment and the court's decision on extending her detention. Park's legal counsel resigns en masse.

April 6: Court sentences Park to 24 years in prison and 18 billion won in fine.

June 14: Prosecutors demand a 15-year prison term over charges of taking bribes from the state spy agency and interfering in elections.

July 20: Court sentences Park to six years in prison for taking off-book money from the National Intelligence Service and orders her to forfeit 3.3 billion won. She was sentenced to two years for violating election laws.

Aug. 24: Seoul appellate court raises the sentence for Park by one year to 25 years in a massive corruption case that led to her removal from office. Choi Soon-sil, Park's long-time confidante, was sentenced to 20 years in prison.

Aug. 29 -- Supreme Court strikes down a lower court's rulings against Park. The top court ordered the lower court to handle Park's bribery charges separately from her other charges. It also sent back to the lower court the corruption cases involving Choi and Samsung's Lee. (Yonhap)