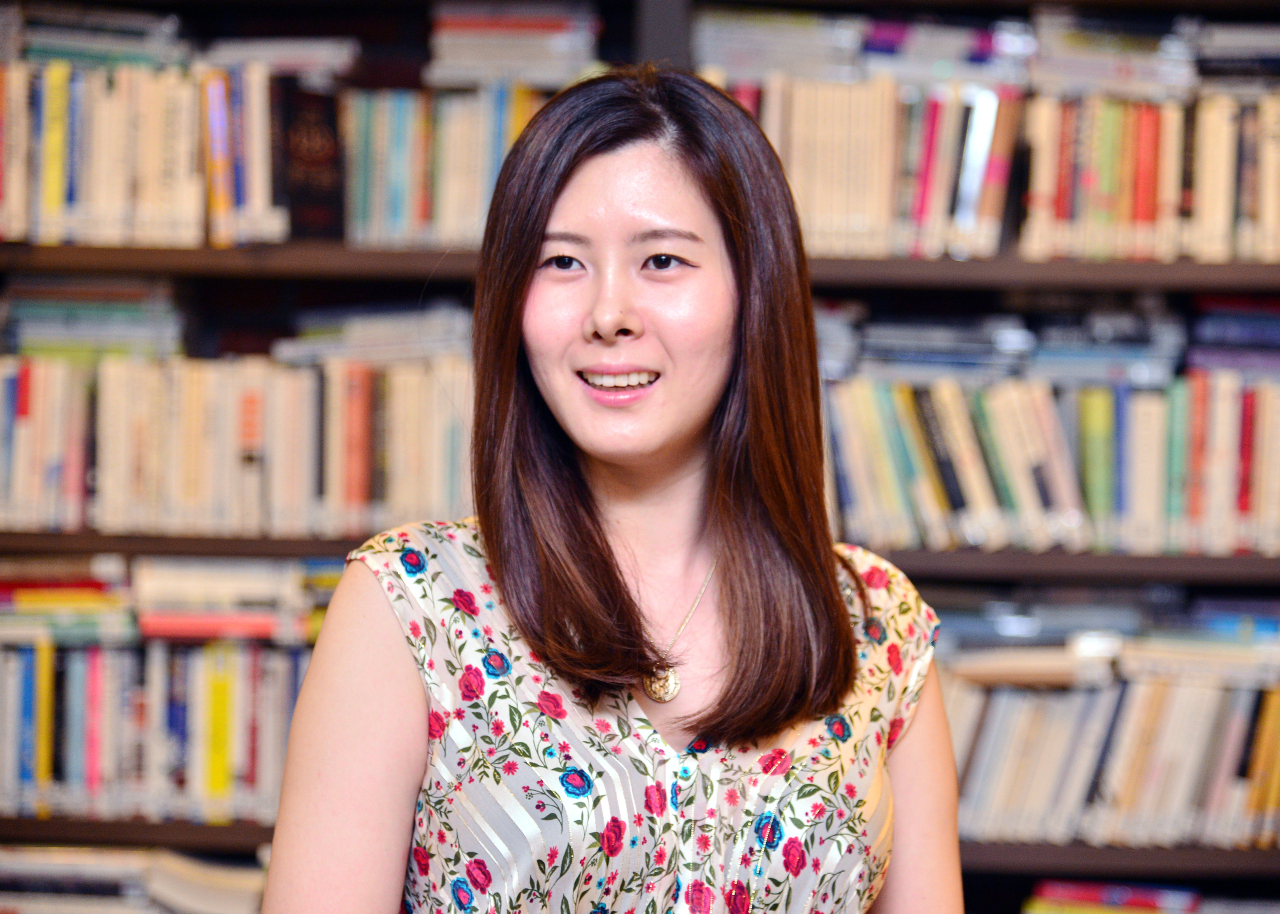 Pi Eugene, a translator and popular YouTuber specializing in English education, poses during an interview with The Korea Herald. (Park Hyun-koo/The Korea Herald)
In Korea’s sluggish publishing industry, YouTubers are emerging as new power players through their personal book recommendations, which translate into real sales figures at both offline and online bookstores.

As with other product placement deals on YouTube channels, however, book recommendations are rarely delivered free of charge. Publishers have to pay for such advertising. The question is, how much can you trust a YouTuber’s pitch for the book in question?

For Pi Eugene, an up-and-coming YouTuber who occasionally reviews English study titles, the solution to secure trust from viewers was simple. She has spurned all paid advertising or review offers from publishers. Instead, Pi picks English reference titles on her own and offers her candid opinions.

In late June, Pi produced a video on her YouTube channel, introducing a newly published two-volume English grammar series. She simply explained the strengths of the series in detail, which caught the eye of its local publisher. The video was shared widely, featuring her convincing review, and helped drive sales of the series dramatically.

Pi’s preference for expressing her personal views without any restrictive filter is part of the characteristics of a new generation popularized by bestselling book “The Age of Those Born in the 1990s is Coming.” Even President Moon Jae-in handed out the book to Cheong Wa Dae staffers early this month to better communicate with the new demographic of Koreans, whose roles and influences are rapidly growing.

Pi, born in 1990, belongs to the very generation and her interest in full honesty and fairness appears to be resonating strongly with digital-savvy YouTube viewers in their 20s and 30s. But creating YouTube content is not her primary job. She wears many hats, another characteristic that defines her generation. Following is an excerpt of a recent interview:

Korea Herald: How would you introduce yourself?

Pi Eugene: I am a translator, and my task in my company is called localization. Currently, I am working at a place where we localize retail shops, drop shipping or regular solutions or programs of an IT company.

KH: Then English tutor can be seen as your third job.

Pi: I started tutoring people during my college years to earn money for my expenses, and I continued to do it until now. However, I don’t have much time so it’s more like a hobby now.

KH: Is there a motive behind starting your blog?

Pi: I actually started my blog because I was bored. Back then, my house was at Busan, so whenever I went back to Busan during my break I always saw my TOEFL books on the shelf. I just decided to upload reviews about the books on my blog so I could look into them later, but people started to ask questions. I started to answer their questions.

Pi: If you start a blog, you receive similar questions. At first, I answered each and every one of them, but later I got kind of lazy. If you create a video about the question, you can simply just attach the link. So I just decided to start using YouTube because I didn’t want to repeat myself by answering similar questions.

KH: Why do you refuse to review books for a fee from publishers on your YouTube channel?

Pi: I am working in marketing. So when I work, there are always things that must be included or excluded. If I apply that to this field of English education, I can’t talk about the weakness or anything negative due to advertisement. I didn’t like that so I just decided not to do it.

KH: Can you offer English study tips for those who are somewhere between beginner and intermediate levels?

Pi: When it comes to methods of studying, there’s one thing I commonly say: Do whatever you want, but you must do it. I personally don’t think people are studying in a wrong way, but they’re just not studying because it is not fun. So if you find something that interests you, you could keep looking into it even if it is a little too hard for you. That is why entertainment is very important. Studying every day is obviously crucial, too. There are a lot of ways to study, it’s just that people don’t do it.