Traditional wooden architecture standing smack in the middle of a new residential town, the Museum of Shamanism appears out of place among the towering apartment buildings around it. It has no space even for a parking lot.

Ironically, though, this might be the location most befitting a building dedicated to shamanism -- which, despite being deeply ingrained in Korean society, is dismissed by many as a backward relic of the past and demonized by the Western religions that now seem to hold sway. 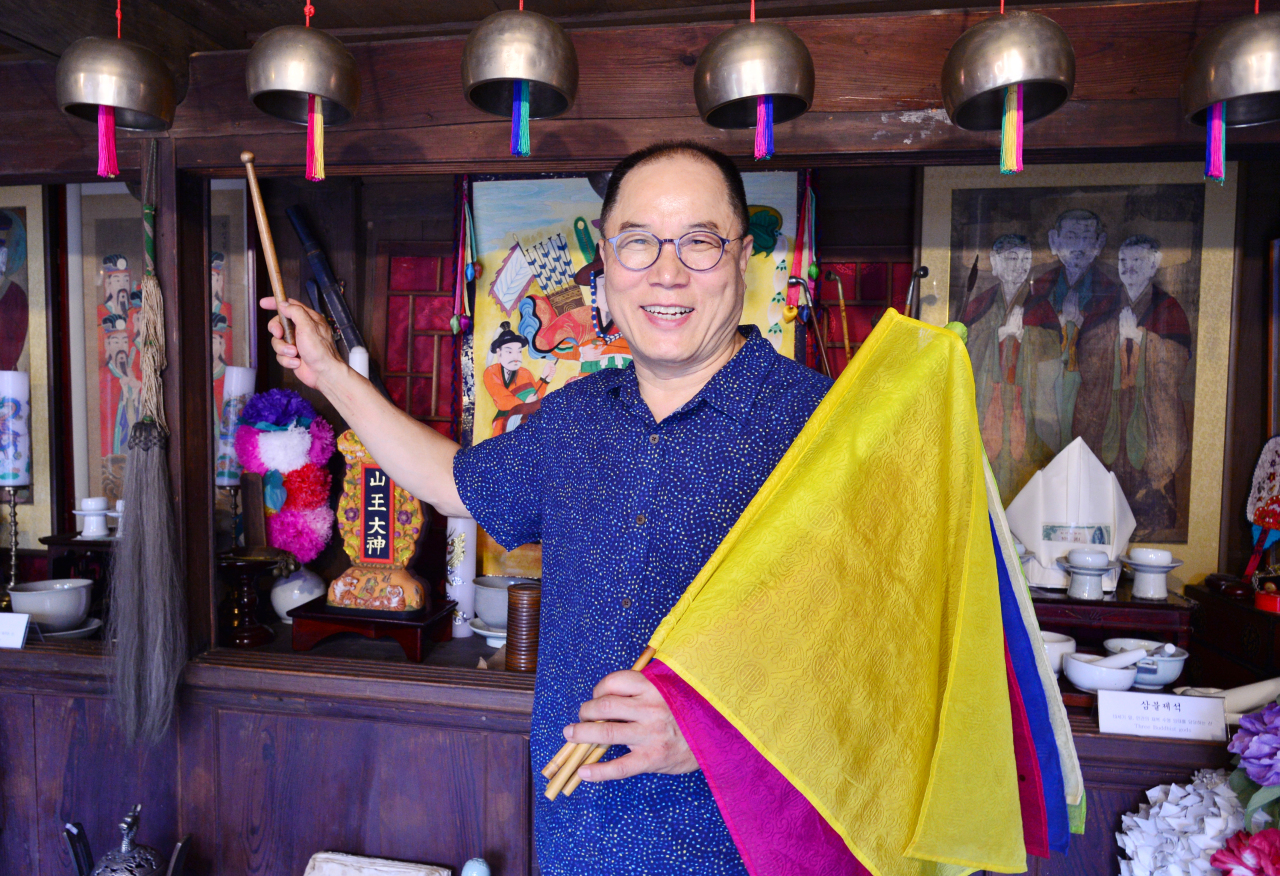 Yang Jong-sung explains the flags and bells used by shamans at the Museum of Shamanism in Seoul's Eunpyeong-gu district, Tuesday. (Park Hyun-koo/The Korea Herald)
“It has been three years since the museum relocated here,” Yang Jong-sung, 67, the museum’s founder and director, said during an interview earlier this week. “Never in my life had I imagined I would have my museum here at this shrine,” he added. The private museum was first opened at Yang’s home in the Jeongneung area in 2013.

The old hanok, or traditional Korean house, that the museum now occupies is the Geumseongdang Shamanic Shrine, whose existence he has known of since the 1970s.

It is the only remaining shrine of three in Seoul dedicated to the mountain god of Naju, South Jeolla Province’s Geumseongsan, built during the Joseon era (1392-1910).

It was Yang, a lifelong folklorist, collector and friend of shamans, who single-handedly campaigned to save the shrine from eviction when the site was chosen for a massive city-run urban renewal project.

“When I think of those days, my eyes tear up. I felt so desperate and helpless. I had to salvage this shrine, but no one would listen to me,” he said, recalling the years leading up to the 2008 designation of the shrine as a cultural heritage site.

“The decision came in a little late. The construction (of apartments) was already past the irreversible point,” he said, explaining the shrine’s unlikely surroundings.

Here nearly 3,000 shamanism-related items are on exhibit, all part of Yang’s personal collection of over 25,000. 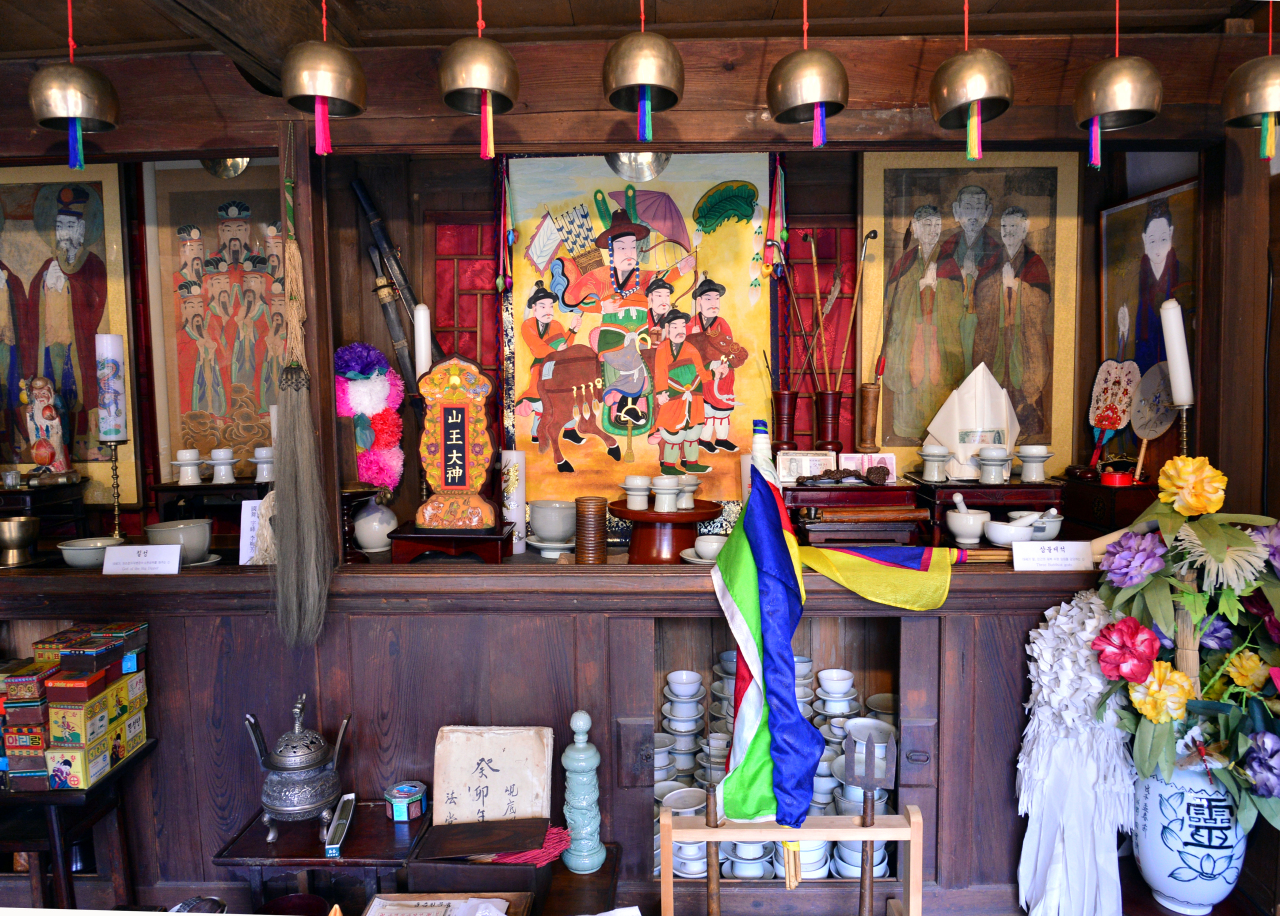 Some 3,000 shamanic items from Yang's personal collection are shown at the Museum of Shamanism in Eunpyeong-gu, Seoul.
From paintings of gods to flags, incense burners, fans and bells to “jakdu,” or straw cutters, his collection is unparalleled. In a typical demonstration of their spiritual powers, shamans dance barefoot on the blades of jakdu during their “gut” performances.

Traditionally, when a shaman died, the implements used by that shaman were burned or buried because people believed them to be imbued with spiritual powers. But Yang persuaded shamans and their families that the tools deserved to be preserved.

The items exhibited here are not just artifacts or relics, Yang continued. They are part of a living religious tradition and remain linked to the spiritual world.

“The items were actually used by shamans for gut (shamanic rites) or divination sessions,” he said.

The museum retains its identity as a real shrine to the mountain god and to a Joseon-era prince of the same name, Prince Geumseong (1426-1457), as well as numerous eunuchs and court ladies buried on a hill in the backyard called Imalsan. Twice a year, shamans gather here to perform gut.

An indication of that, perhaps, is that this interview was interrupted by an uninvited visitor -- a young woman from Busan who asked for permission to pray at the shrine. The museum was supposed to be closed that day, but had its door open for the interview, which lasted for about an hour and a half. In a trembling voice, she said she was praying and felt the strong urge to make the trip.

“This happens. They come from everywhere,” Yang said as he returned to the interview.

Yang is a respected authority in the field of Korean shamanism studies. He received a Ph.D. in folklore from Indiana University in the US, worked as a curator at the National Folk Museum until 2012 and published numerous books, articles and papers. He is currently a member of Korea’s Cultural Heritage Committee.

Before opting for the academic path, however, he trained to be a shaman.

Shamans were his childhood fascination. Like teens nowadays obsessed with K-pop idols, he was enthralled by shamans’ performances, which later developed into a broader interest in various forms of traditional performance.

“I lived at my teacher’s home for seven years,” he said, referring to the late U Ok-ju, whom he met during his university years.

Having been part of the shaman community for many years, he has witnessed many mysterious incidents. He has also developed a sense of empathy for shamans, after seeing how despised they were within society.

“I am not a shaman. I am a scholar. But unlike other scholars, I have had an insider’s look into the shaman world,” he said.

Most Koreans see shamanism through the lens of either tradition or superstition, but Yang stresses it is a living religion that still permeates many aspects of Korean society.

“Our culture is, in its core, all about spiritual energy,” he said. That is what drives the dynamism of Korean society and its people even today, he said. 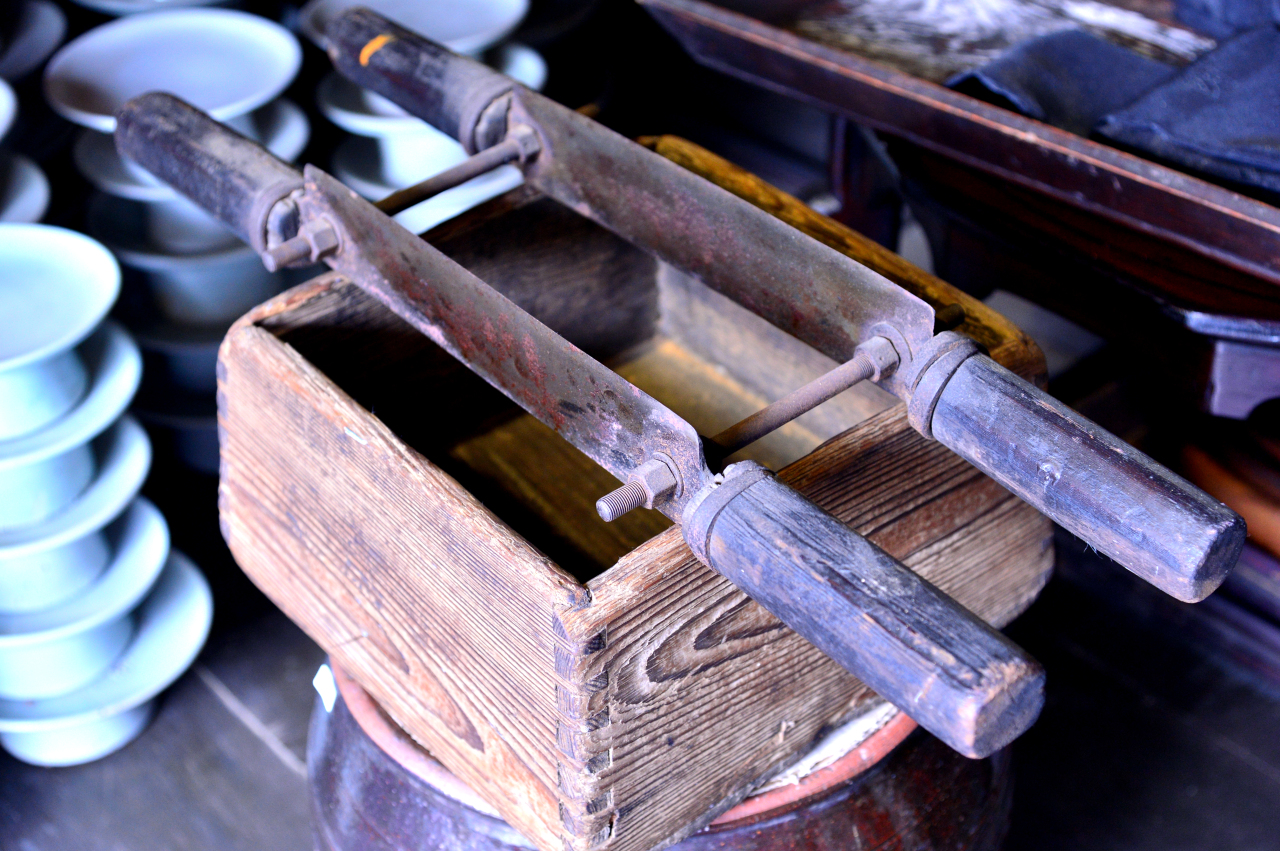 Jakdu, a straw cutter; Shamans dance barefoot on the blades during rituals to demonstrate their spiritual powers.
Shamans, through their gut performances and other activities, have played a central role in uniting families, communities and Koreans as a nation through difficult times. As healers, counselors and intermediaries between the human and spiritual words, they help society, he stressed.

The most beautiful of all shamanic rituals, he said, is the one for the deceased where shamans aggressively look at how and why the person died. Then they prepare the dead for their passage to the otherworld, free of the shackles of this world.

“Only when the deep sorrow of the dead is resolved, the dead can let go and move on. It is the same with mourners. Everybody experiences an explosive release of emotions during the process,” he explained.

Yang hopes to preserve the long history of Korean shamanism and wants to make the shaman culture more accessible to young shamans as well as the general public.

As part of such efforts, the second installment of the Shamanism Academy launches next month, featuring lectures by shamans themselves.

The Museum of Shamanism is located near Gupabal Subway Station in Seoul’s Eunpyeong-gu district. It opens only on Thursdays and Fridays. Admission is free.