[ The Korea Herald – Send E-mail ]
[Weekender] Won, dollars and supernotes: How fake bills are detected
The leader of KEB Hana Bank’s anti-counterfeiting team discusses how experts spot forgeries and look at the danger of a suspected North Korean export: supernotes
By Jung Min-kyung
Published : Aug 16, 2019 - 09:48
Updated : Aug 16, 2019 - 09:48
An average of 1,000 counterfeit bills are spotted and seized annually in South Korea -- many of them via KEB Hana Bank’s anti-counterfeiting center.

With 15 employees and technology worth 1.5 billion won ($1.3 million), the unit handles 37 currencies and is responsible for nearly 80 percent of all counterfeit bill detection in the country.

Situated in the basement of a KEB Hana Bank branch office in Euljiro, central Seoul, the center scrutinizes banknotes worth about 12 billion won every day.

“We not only inspect our own currency bills (from KEB Hana Bank) but also take orders from the national police and other government agencies,” Yoo Hyun-chul, a senior manager at the center, told The Korea Herald on Aug. 9.

“Our team deals with a total of 37 different currencies, but the focus is mainly on the Korean won and the US dollar,” he added.

According to Yoo, 39, the forgery detection process is largely automated and consists of two main stages.

“We first insert the banknotes into the machine for general inspection, and if it detects any suspicious bills, we fish them out and use a separate technology for a closer look,” he added.

The second stage in the process, developed by UK firm Foster and Freeman, involves scanning bills for holograms, watermarks and other hidden security features engraved on the surface. Genuine banknotes show up a slew of these embedded marks -- signs of authenticity that are almost impossible for counterfeiters to copy.

“For example, on South Korea’s 10,000-won bill, there are a series of minuscule Korean characters engraved across the collar of King Sejong’s gown, which is impossible to see with the naked eye and will get smudged when printed with a regular inkjet printer,” Yoo explained. 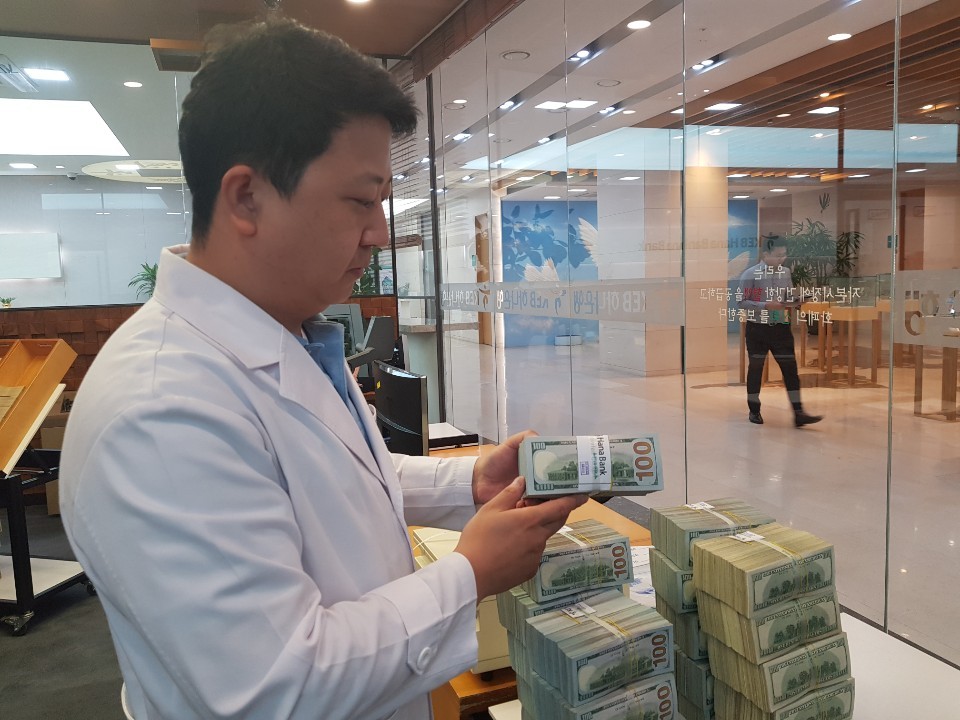 Yoo Hyun-chul, senior manager of KEB Hana Bank’s anti-counterfeiting center, inspects stacks of $100 bills at the center. (Jung Min-kyung/The Korea Herald)
The art of printing currency is one of the most complex security tasks for a government, along with the production of passports.

“The technology is very complex and ever-evolving. But counterfeiting methods are advancing too,” he said.

In recent years, “supernotes,” near-perfect replicas of $100 dollar bills allegedly produced by North Korea, have emerged as a major threat to South Korea’s currency system -- and, perhaps, to the world’s. US dollar bills are by far the most popular targets due to their role as the global currency.

The center made global headlines in December 2017 by discovering a new kind of supernote, one never detected before globally.

Despite the lack of solid evidence as to its origin, Yoo strongly suspects North Korea.

“For the moment, we can only suspect that North Korea is behind the distribution of supernotes, because that level of quality in forgery can only be produced on a governmental level,” he said.

North Korea is the only country known to have illegally produced counterfeit bills under government supervision, he went on. “It basically means they used a different (more sophisticated) printing material and ink for the counterfeit notes.”

Another bit of circumstantial evidence is that the fake bills have been found most commonly near the China-North Korea border.

Banknotes with a face value of $500, used in the US until their official discontinuation in 1969, are also a target of counterfeiters, Yoo continued.

Those caught with the fake bills said they had received them as collateral from someone involved in “old businesses” in the US.

Spending more than six years in the anti-counterfeiting center has broadened Yoo’s horizons and helped him develop an eye for distinguishing forged money from the real thing, but he believes he still has a lot more to learn.

“It’s something I want to continue for a long time -- it’s a financial field where we can become experts. Understanding the history and flow of global currency helps counter the risks imposed by counterfeit bills and abrupt changes in the economy,” Yoo said.