[ The Korea Herald – Send E-mail ]
[Anniversary Special] Historian calls for recognition of progress in Korea-Japan relations
By Kim Hoo-ran
Published : Aug 14, 2019 - 17:31
Updated : Aug 14, 2019 - 17:31
The long-brewing dispute between Seoul and Tokyo over history has come to a head, spilling over into the economic realm, with Japan restricting the exports of key materials for manufacturing chips and displays to South Korea and removing it from its whitelist of trade partners.

While the Korean government has responded with retaliatory measures of its own and citizens here are boycotting Japanese goods and travel, there are concerns about bilateral relations and how the current situation will pan out without too much damage.

The direct cause of the current troubles is the Moon Jae-in government’s de facto overturning of the two countries’ 2015 agreement on “comfort women,” according to Chung Jae-jeong, a former head of the Northeast Asian History Foundation and current adviser on history to the Seoul Metropolitan Government, told The Korea Herald on Aug. 9. 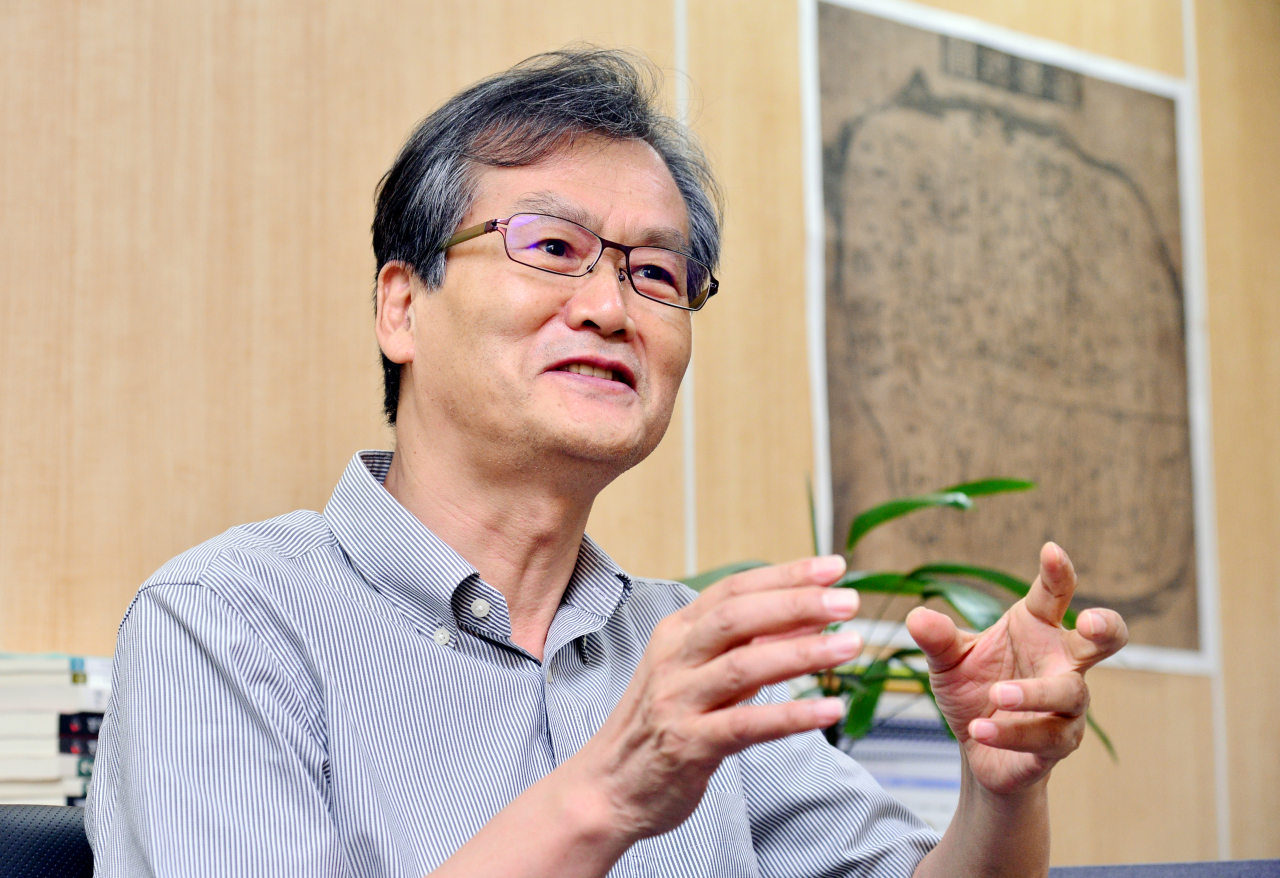 Chung Jae-jeong (Park Hyun-koo/The Korea Herald)
It was not easy for Japanese Prime Minister Shinzo Abe to accept the agreement, Chung noted, but it was viewed as a step toward reconciliation on historical issues between both countries.

“This is unacceptable to Japan which sees the ruling as a violation of the 1965 Basic Treaty and international law,” Chung said.

Mutual distrust had been building over the years, and Japan’s anxiety over the fact that the two countries may not be headed in the same direction played a role in Japan “exploding,” Chung explained. While South Korea, the US and Japan have formed the traditional axis in Northeast Asia, Tokyo sensed that Seoul was increasingly leaning toward Beijing and Pyongyang.

As to why Japan is lashing out at this particular point, Chung suggested that Japan feels it has been patient long enough. Also, measures to implement the Supreme Court ruling, such as the liquidation of the relevant Japanese companies’ assets, are imminent.

“Japan’s measures were taken at the last possible minute,” Chung said. In fact, Japan had been sending signals to South Korea since the end of October, and since January, it had been warning of economic measures. “We should not look at it as having come out of nowhere,” he said.

The outcome of the current conflict depends on the South Korean government’s response. “This is a battle that Japan does not really want either,” Chung said. “We should work so as to not give them justification for their actions,” he said.

South Korea needs to proceed in a way that can resolve the forced labor ruling. “If we can do this, I think the current conflict can be solved,” he said. From Japan’s perspective, the Supreme Court ruling violates and discards the 1965 treaty, he explained. “Japan came to have doubts, and we did not provide a clear answer,” he said.

“I think there is a feeling in Japan that it has been dragged along by South Korea till now,” Chung said.

To even get to the 1965 treaty, it took 14 years of fighting because of differences in historical perspectives, he recalled. In fact, Japan’s statements of apology concerning its colonial past and wrongdoings over the years are a result of great efforts by scholars and governments.

Chung noted that we are at a point where Japan has recognized that its colonial rule of Korea was unjust -- Prime Minister Naoto Kan’s statement in 2010 acknowledged that the colonial rule was “against the will of the Korean people.”

While Japanese view the 1910 Japan–Korea Annexation Treaty as a legal treaty recognized by the international community, for Koreans it is a treaty signed under duress and therefore illegal. “The 1965 treaty did not solve the differences and scholars debated the issue for the next 30 years,” Chung said.

The apologies by Japan need to be respected, Chung said. “We need to remind them of their statements. This will be a good approach toward a solution,” he said.

“We have to talk about us. Japan is not a country that will do what we tell them to do,” said Chung, urging Koreans to examine themselves first. “Rather than merely saying Abe and Japan are bad, we have to think about what we can do, faced with such people,” he said.

There is an old saying that the shrimp’s back is crushed in a fight between whales. “That was true 100 years ago,” he said, adding, “Post-liberation, (geopolitical) environment was worse than 100 years ago, but we worked hard and became an economic powerhouse, ranking 10th in the world. This is due to people’s efforts.” “We have at least become a dolphin despite the division of the peninsula,” Chung said.

“Dolphins are smart and they can survive among whales,” he said.