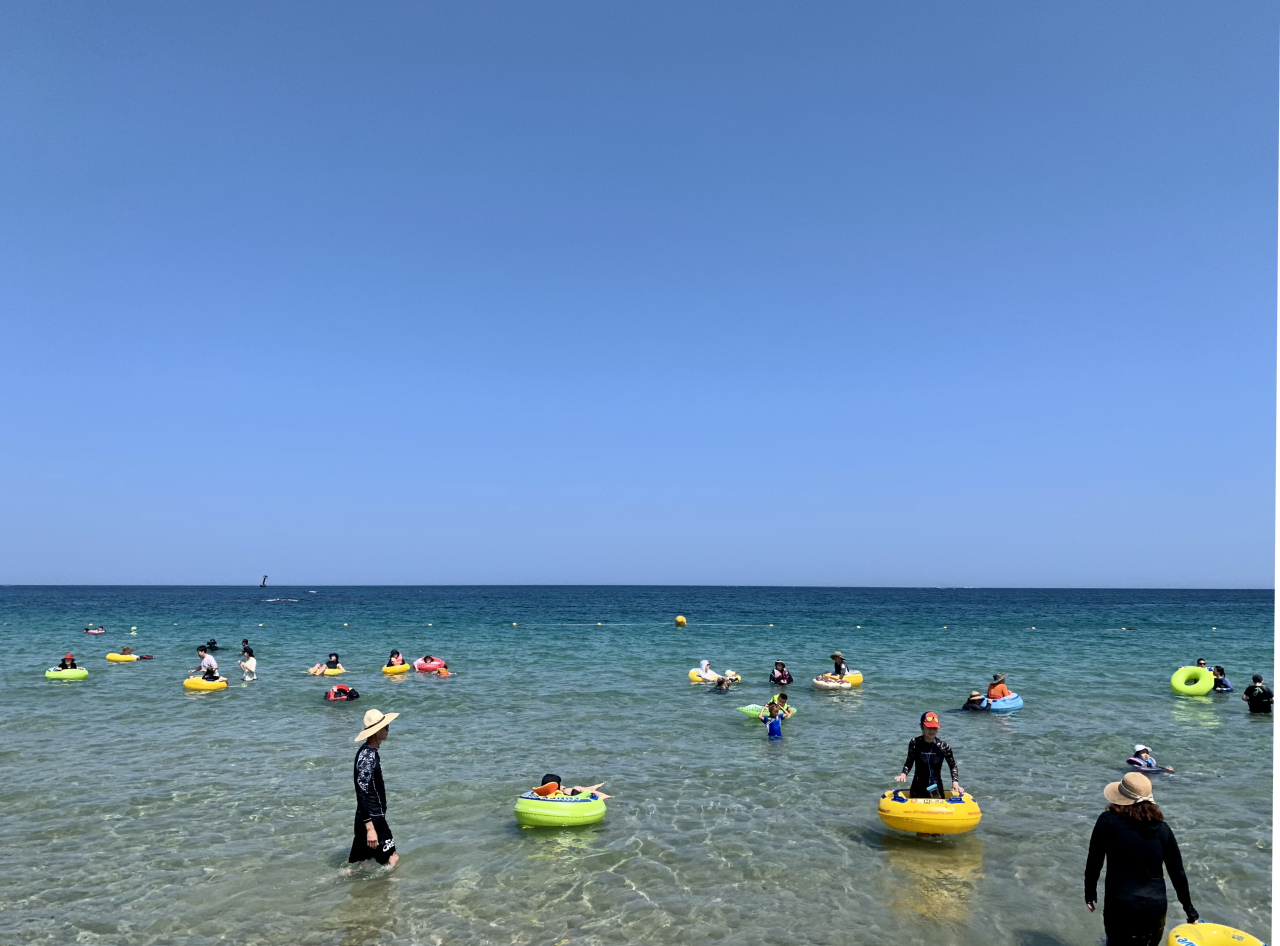 Ayajin Beach near Sokcho (Im Eun-byel/The Korea Herald)
SOKCHO, Gangwon Province -- A bustling port city on the east coast with Seoraksan in the backdrop, Sokcho, a three-hour drive from Seoul, is a much-favored summer destination for South Koreans.

Defined by its lively beaches, abundant seafood and vibrant city atmosphere, the city is packed with vacationers in summer. Its recent rise as a surfing destination has led to even more visitors.

Though Gangwon Province does not have a thriving culinary scene, Sokcho is still home to various delicacies created with local produce. 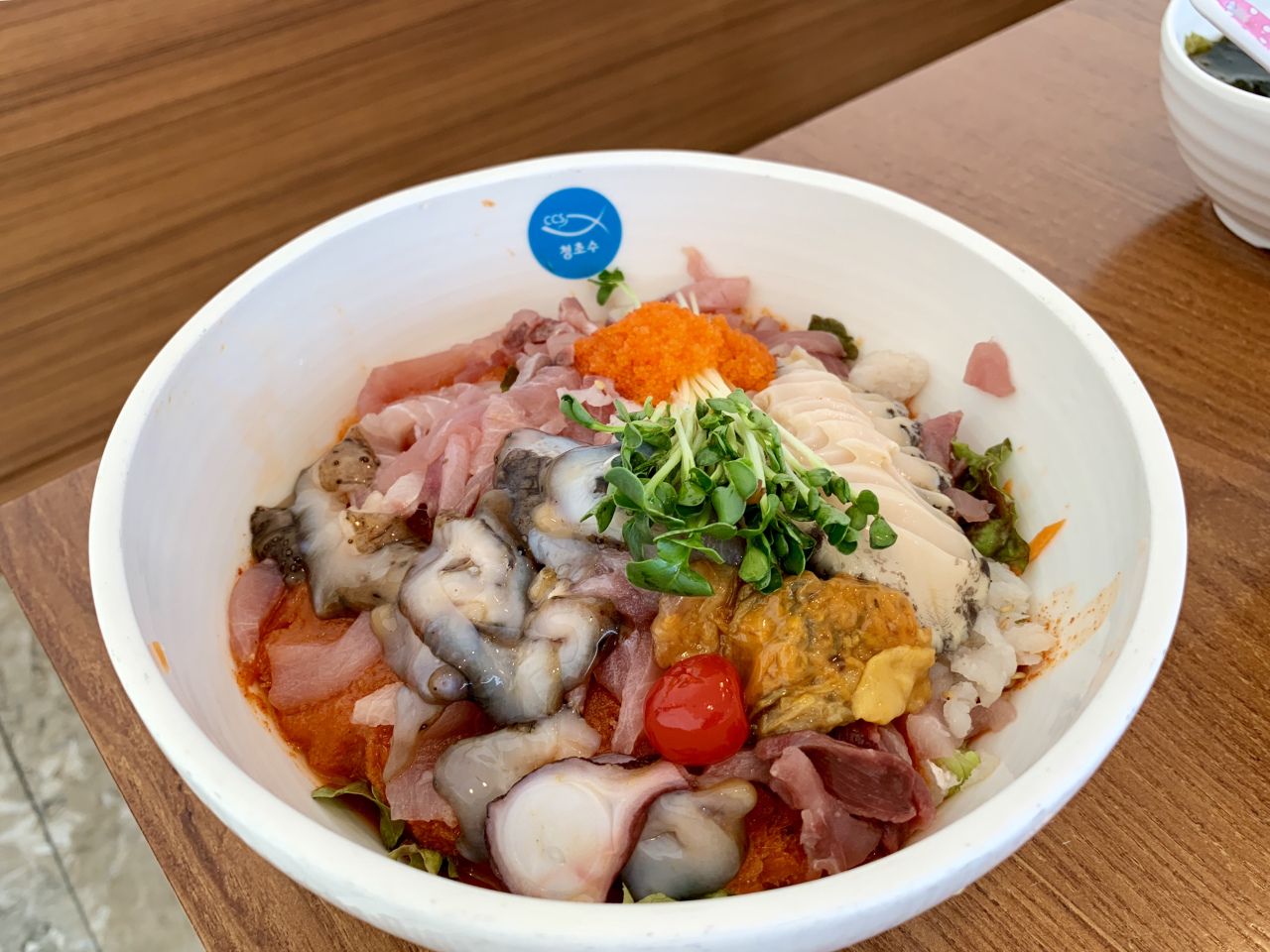 Chilled with ice, the reddish broth stimulates the appetite suppressed by summer heat. It is everything but bitter, being spicy, sweet, briny and salty all at the same time.

As Sokcho is a port city, fresh seafood is available year-round. White-meat fish, octopus, abalone and conch are often used, but there is no limit to the types of seafood that can be used to make mulhoe.

Noodles can accompany the dish. Though unflavored, the noodles make great pairing with the strong, icy broth. 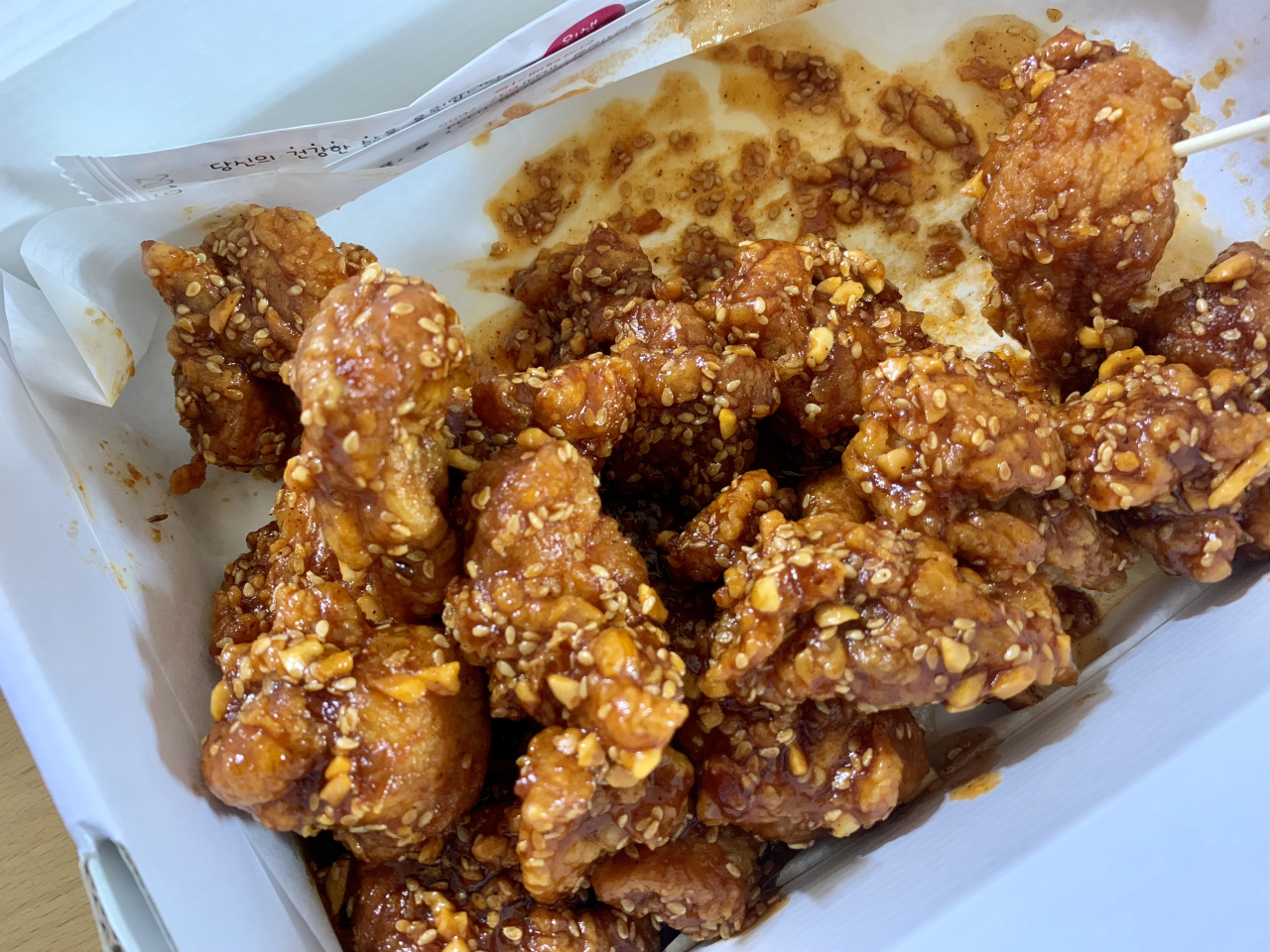 Dakgangjeong from a stall at Jungang Market (Im Eun-byel / The Korea Herald)
We all know about Korean’s love for fried chicken. Well, Sokcho is a city known for its fried chicken. Pronounced dakgangjeong in Korean, the deep-fried and braised chicken is a local treat.

Chicken is cut into bite-size pieces. Deep-fried in oil and braised in a spicy sauce, dakgangjeong may be similar to fried chicken, but the pieces are smaller and the sauce is different, too. Often, vendors sprinkle nuts on the top to add flavor.

At Jungang Market, the largest traditional market in the city, there is an alley packed with stalls selling fried chicken for takeaway. All around you, all you can see are dakgangjeong stalls.

Like many food alleys in Korea, the cluster was formed around a famed spot. Manseok Dakgangjeong, opened in 1983 at the market, continues to enjoy great popularity. Customers, eager to take the snack back home, form a long line in front of the stall. 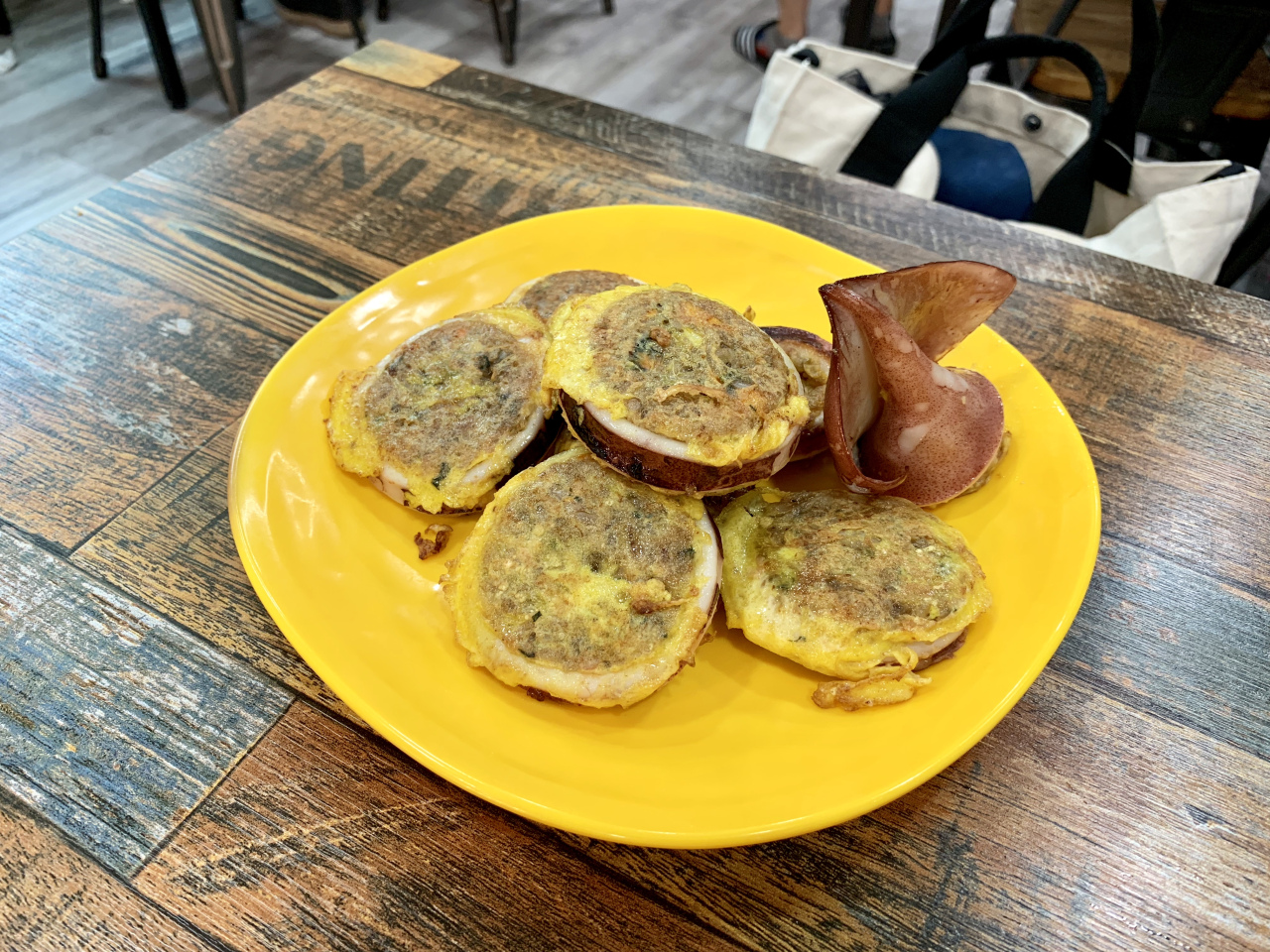 Squid sundae from an eatery at Jungang Market (Im Eun-byel / The Korea Herald)
Sundae, or Korean blood sausage, is more fun in Sokcho.

Abai Village is where people who fled North Korea during the Korean War resettled. The word “abai” is a dialect of Hamgyeong Province in North Korea, referring to father or grandfather.

Abai sundae originated from the village and is similar to typical sundae but contains sticky rice instead of glass noodles. The slices are bigger and thicker, too.

Another specialty of Sokcho is squid sundae. For the dish, the trunk of a squid is used instead of pork intestines. Fillings are stuffed inside the squid, soaked in beaten egg and pan-fried. 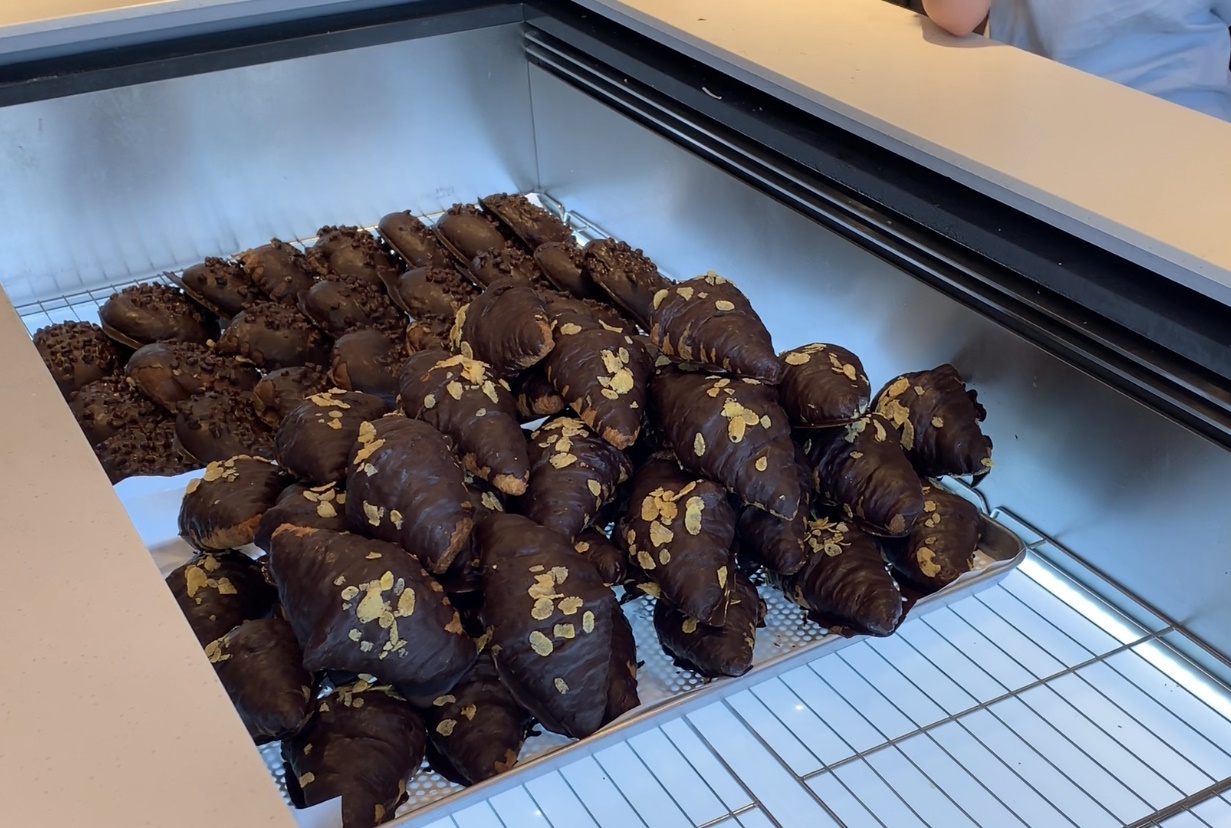 Breads on display at Bong Bread (Im Eun-byel / The Korea Herald)
The number of trendy cafes is also on the rise.

As it is a seaside city, cafes with ocean views are popular, but old factories renovated into cafes are favored for their industrial vibe.

Though not a cafe, Bong Bread is a well-known bakery in Sokcho for its old-style breads. Garlic baguette is especially popular.