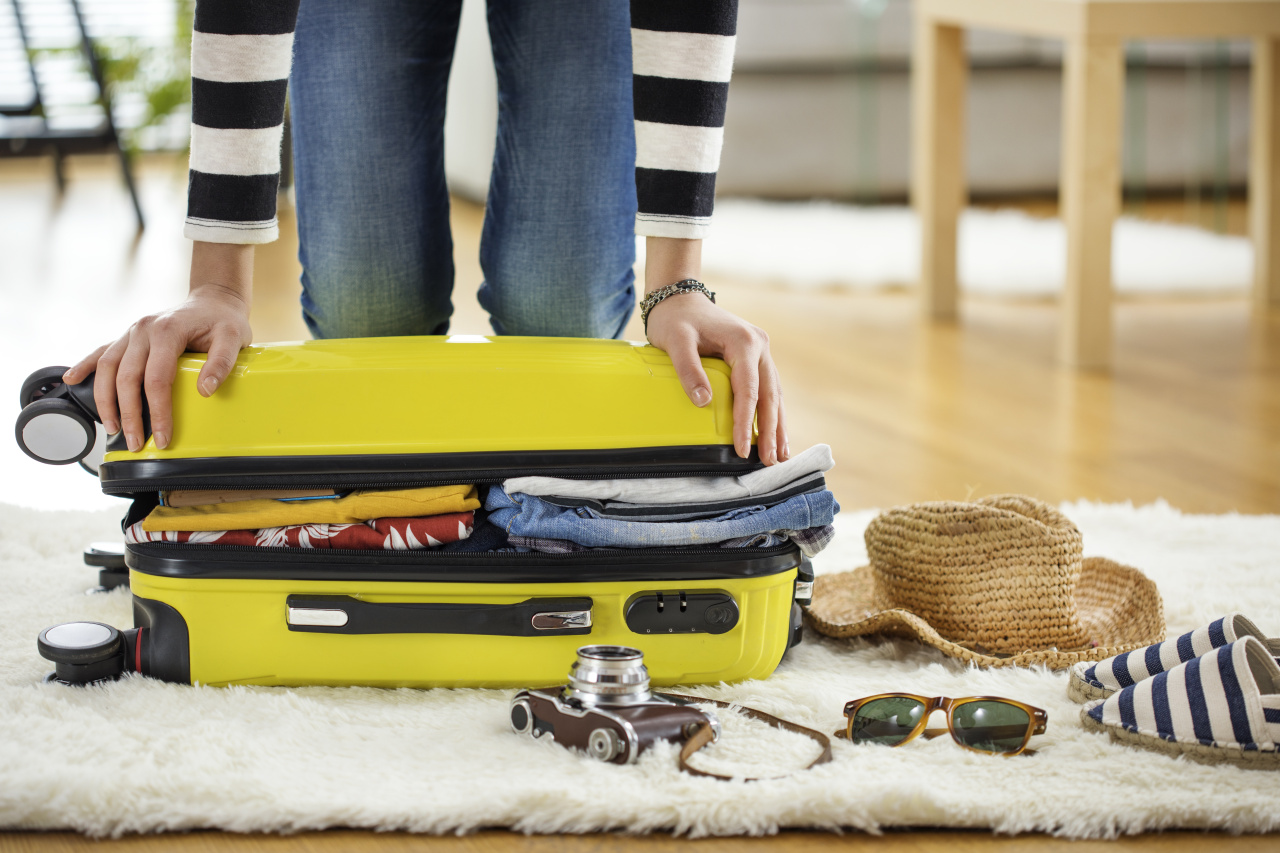 (123rf)
Despite the prolonged wet weather, vacation season is in full swing in South Korea.

With nearly half of holidaymakers traveling in late July and early August, life in bustling Seoul slows down.

“Proof that it is now peak holiday season -- my neighborhood is quiet,” says Kim Yeon-ju, who lives near a bar-heavy district in Goyang city, Gyeonggi Province. “I see that many bars and shops are closed.”

It was quiet Thursday in the Yongsan Electronics Market, a cluster of computer retailers and repair shops in Seoul’s central district of Yongsan. Most shops were closed for the market’s official Aug. 1-4 summer break.

The same goes for Namdaemun Market, the largest market in Seoul, which sells all sorts of things from clothes, dishes and cameras to imported chocolates.

Starting with the flower section, which was closed earlier this week, merchants are to go on vacation in groups until mid-August. Next week will likely see the greatest number of closed shops.

Summer vacation in late July and early August has benefits, says Lee Young-gi, 71, who has been in the home interior business for nearly five decades.

“In the ’70s and ’80s, we didn’t have air conditioning everywhere like we do now. So on the hottest days of summer, factories just closed for a few days, sending their entire staff on vacation,” he said. “It was a practical and convenient idea.”

Lee himself has stuck to that practice because there is no other option. “All the suppliers are away.” 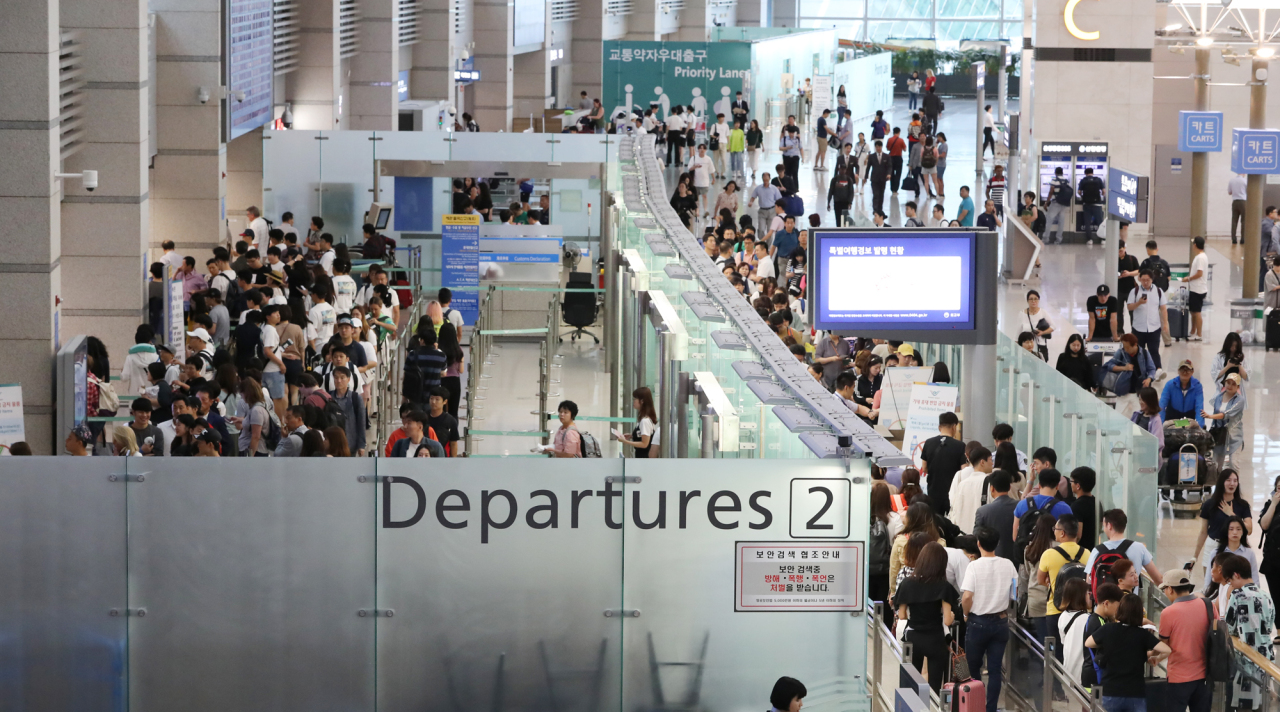 Travelers are seen lining up near a departure gate at Incheon Airport on Wednesday. (Yonhap)
As in previous years, measures are being taken to ensure road safety, with 4.9 million vehicles expected to hit the road each day. That includes extra police personnel and drones to monitor traffic violations and accidents as well as increased public transportation between Seoul and popular destinations.

According to surveys, Gangwon Province is the most popular destination among holiday planners for its rugged mountains and beautiful beaches along the east coast.

For years, elementary school teacher Kim Sun-young has spent her time off at Ayajin in Goseong, Gangwon Province, where her parents have a small vacation house. The town has a small but nice and quiet beach -- perfect for young kids like her two sons.

“I could sense Ayajin was getting more and more discovered year after year. This year, it’s just too crowded,” she said.

When it comes to crowds, no beach can compare to Busan’s Haeundae.

The 1.5-kilometer-long sandy beach draws tens of millions of vacationers daily in the peak season, prompting locals to joke that the place becomes “half people and half water.”

On Aug. 2, 2008, it set a record, though not officially certified, for the largest number of parasols rented for vacationers -- 7,937.

“A bowl of chicken soup for 200,000 won ($168)? Seriously? This is why I never go anywhere in Korea in the peak season,” reads an online comment below the article. The dish -- which can be served for one person or shared by two to four people, depending on the restaurant -- normally costs between 10,000 and 50,000 won.

“It is costly and is too hot to walk around,” she said. “I like to take a few days off in summer though, just to relax at home or at a hotel.”

She likes to plan vacations in spring or fall when “air tickets are cheap.”

For Choi Hyun-chul, an owner of a restaurant in Seoul, summer vacation is what he misses most about his time as an employee of a company.

“Ever since I opened the restaurant two years ago, I have never rested more than three days in a row during typical holiday seasons. Staff go on vacation, so I have to cover for them,” he said.

His Korean food restaurant in northwestern Seoul opens 24 hours a day, seven days a week, except for two days a year: Lunar New Year’s Day and Chuseok, the Korean Thanksgiving.

But later this month, he is planning a four-day family getaway to Macao, China -- his first overseas trip in five years. “I just want to stay at a nice hotel and relax. I have no other plans,” he said.

Meanwhile, there are people who can’t get away for various reasons.

“President Moon will work at his office as usual,” said the Blue House in a text message to correspondents last week. “But the president let officials take their holidays as planned.” It is the first time that Moon has canceled his vacation while in office.

Amid an ongoing trade feud with Japan, Korean companies relying heavily on Japanese parts and materials -- Samsung Electronics being the most prominent -- are on edge.

Samsung’s top-level executives are in no mood for a vacation, local reports say, as they go all out to secure alternate suppliers for Japanese materials vital to production of display panels and chips.

On the other hand, delivery service workers are asking retail industry officials as well as customers to make Aug. 16-17 “no delivery days,” which would allow them a four-day break starting from the Aug. 15 Liberation Day national holiday.

“Conditions vary depending on companies, but when a deliveryman wants to take a day off, usually the worker has to hire someone to cover for him or her at his or her own expense,” said Yun Taek-geun, vice chairman of the Korean Confederation of Trade Unions, an umbrella labor group, at a press conference in Seoul on Thursday.