The number of jobless people aged between 15 and 29 increased from 388,000 to 453,000 over the corresponding period, according to Statistics Korea.

The youth unemployment rate exceeding 10 percent is arousing social worries, as it was 8.4 percent a decade ago (in June 2009) and 8 percent five years ago (in June 2014).

Though the Moon Jae-in administration had pledged to prioritize employment of young people, it has yet to create sufficient jobs to satisfy those in their 20s and early 30s. Moreover, the government has been criticized for sharply hiking the minimum wage, which is believed to have hampered active hiring. 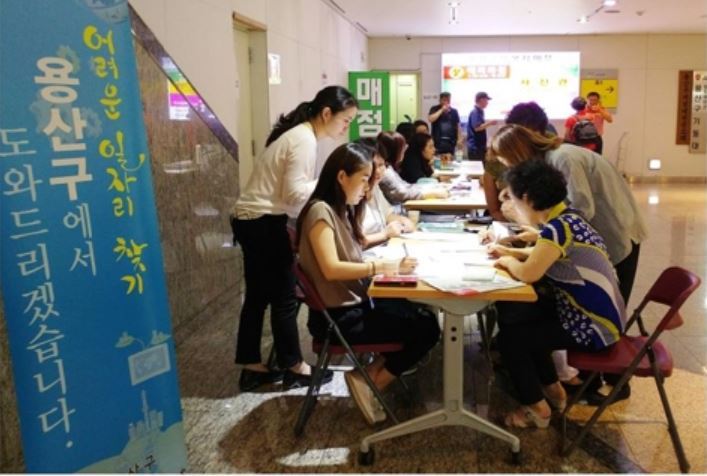 The administrative headquarters of Yongsan-gu, Seoul holds a job fair in 2018. (Yonhap)
The results are that Korea is losing ground to its peers.

For those aged 15-24, South Korea posted 10.5 percent in youth unemployment in 2018, according to the Organization for Economic Cooperation and Development.

The figure was higher than the youth jobless rates of countries whose per-capita GDP rankings are behind Korea.

The US has also reduced its youth jobless rate to 8.6 percent, and Japan has the lowest, 3.7 percent, among the 36 OECD members.

Konkuk University professor Oh Jung-keun was quoted by a media outlet as saying that “the incumbent administration has only accelerated in raising the statutory minimum wage.” He said that the government had neglected easing regulations and expanding the flexibility of the labor market.

Experts have continued to urge the government to eliminate regulatory hurdles for service sectors, such as finance, logistics and tourism, to create more jobs.

A former government official raised the need to study the case of Japan. He cited that Japan had lowered the unemployment rate among those between 25 and 29 years old to 4.1 percent last year, which is quite low compared with 9.5 percent for the same age group in Korea.

He said that Japan, which suffered a long spell of economic difficulties in the 1990s, has been active in providing young people with a variety of job-training and employment information under consistent support from its past and current administrations.

But a professor of the Labor Research Institute of Korea University said the rise in youth employment could be attributable to an increase in part-time or short-term jobs rather than an improvement in stable jobs.

He has called for the government to push for the creation of fundamentally stable jobs, citing the extended unemployment rate.

The OECD clarified that Korea’s jobless rate came to 4 percent during the second quarter of 2019, which far exceeds 3.6 percent in the US for the same period. Japan posted an unemployment rate of 2.4 percent in the first quarter of the year.

“In the early 2010s (during the third quarter of 2011), Korea and the US recorded unemployment rates of 3.2 percent and 9 percent, respectively,” a research analyst in Seoul said. 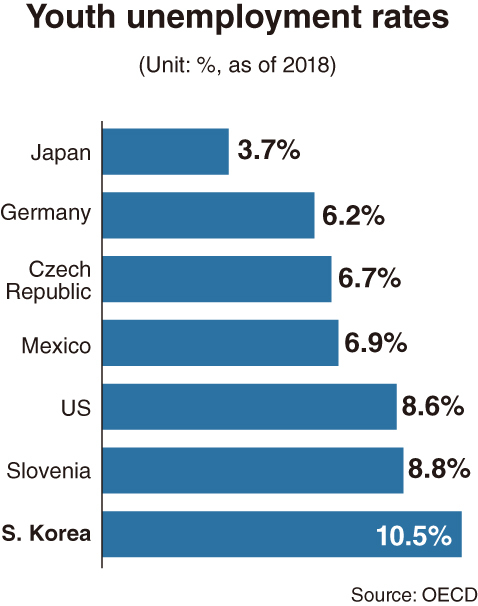 (Graphic by Han Chang-duck/The Korea Herald)
Though the gap between the two countries has narrowed over the past few years, the reversal in jobless rates this year indicates that Korean economy has been sagging and in need of a breakthrough, he added.

The OECD, in its recent economic outlook on some member countries, predicted a 4 percent jobless rate for Korea this year.

This means that the yearly unemployment rate may surpass 4 percent for the first time since it posted 4.0 percent in 2001.

The Paris-based organization cited the sharp raising of the statutory minimum wage, manpower restructuring among manufacturers and the drop in the working age population, as the main reasons.

It had pointed out that the drastic hike in minimum wage could hold back employment and gross domestic product growth.