[ The Korea Herald – Send E-mail ]
[Herald Interview] Thriving as a freelancer in era of social media
Seo Eu-ra inspires freelance wannabes to explore independent career path, offering both tips and caution
By Yang Sung-jin
Published : Jul 26, 2019 - 10:07
Updated : Jul 26, 2019 - 10:08
Do you find it difficult to feel a sense of achievement and self-fulfillment at work? Are you considering a career switch to freelance work? If so, you might get some useful information from Seo Eu-ra, who has transformed herself from an office worker into a freelance translator, author and YouTuber.

Seo, also known as Seo Merry on social media and YouTube, is gaining in recognition for her tips and guidance to Korean workers interested in exploring new opportunities beyond their current jobs. 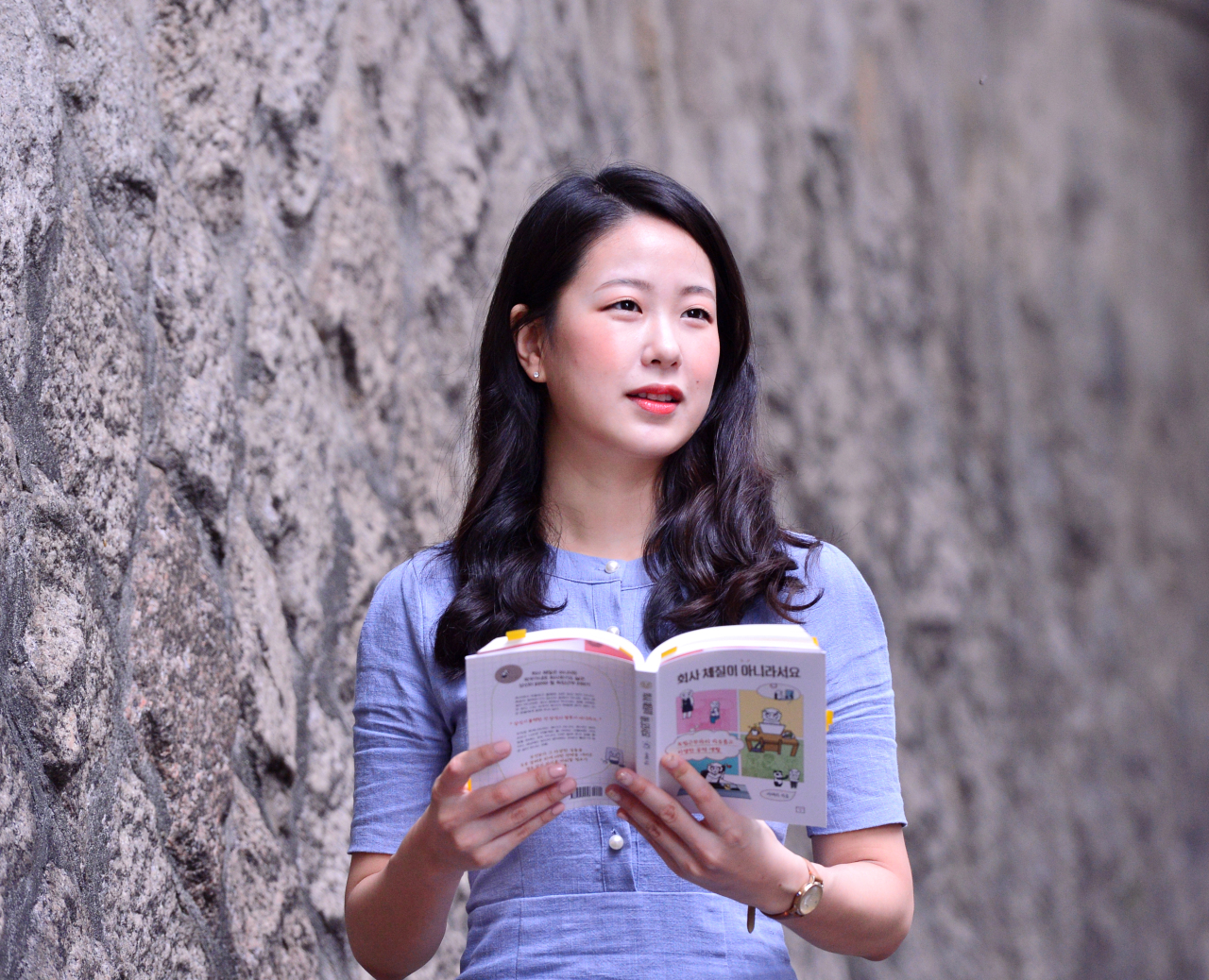 Seo Eu-ra, translator, author and YouTuber, poses in a recent interview with The Korea Herald. (Park Hyun-koo / The Korea Herald)
As an author, Seo is known for her book “Working for a Company Is Just Not for Me.” But many readers and online users come to know her through three digital platforms: Instagram where she showcases her illustrations; Brunch, a digital publishing tool by Kakao in which she serializes her writings; and YouTube, the video site through which she reviews books, shares tips on learning English and meets with her online fans.

Seo is now regarded as an up-and-coming freelancer in the publishing industry, thanks largely to the sizable number of online fans she has won over with her writings, illustrations and videos. But it was not long ago when she felt hopelessly trapped and lonely.

It was not that Seo had no interest in the work she was doing at the company. The heart of the problem was that she did not like the way corporate organizations take an individual worker’s time and emotions hostage.

After spending five years in office jobs, Seo finally jumped into the freelance fray. She set her eyes on translation, vaguely confident that her penchant for books, coupled with a high level of English proficiency, would come in handy for a smooth career transition.

Seo’s high hopes were shattered when she signed up for a translation academy. She had to attend a basic class and start from scratch. “I was confident since I majored in English literature at college, I was reading many books and I thought my writing was above average. It never dawned on me that I had to start with a basic translation course,” she says in her book.

Seo casually describes herself as “ordinary” and “super-timid.” But the reality she confronted as a freelancer was not for the faint-hearted. Obstacles and traps were hidden everywhere, threatening her already fragile position. As she did not have any noticeable credentials during her self-training period, she had to endure obscurity without any clear guidance. In retrospect, Seo persevered thanks largely to her “desperate desire” to avoid returning to her same old job filled with restrictions.

Salaried workers tend to hold the view that freelancers enjoy a life of freedom and unlimited possibilities. But as with other jobs, Seo cautioned, freelance workers also battle a slew of practical problems in return for their freedom. “When you have enough work assignments, you feel greater freedom and a sense of achievement. When you have nothing to do, however, you have to endure every single day, feeling like you’re smaller than a tiny particle in the universe. This is the ironic fate of a freelance worker,” Seo says.

Seo eventually gained a foothold as a translator, author and illustrator. Her success is related to her efforts to be dependable as a freelance worker. She religiously kept her deadlines. She topped the expectations from her clients and waited patiently when she did not get a paid assignment.

Throughout her book, Seo stresses the importance of strengthening two essential qualities to be a successful freelancer: responsibility and endurance.

Another key element is the willingness to try out internet as a channel to boost an individual profile. “Internet promotion is open to everybody and 100 percent free of charge, and you don’t have to reveal your face or name,” she says. If she were born in the pre-internet era, Seo said she would not have dreamed of becoming an author or illustrator.

Seo is now encouraging freelance wannabes to post what they create on the internet, even though it might be disappointing or unpopular. “After all, we have nothing to lose,” she says.

The following are excerpts from the interview:

KH: What was the most difficult aspect in working at a company?

Seo: Since a company has a fixed time to get to work, you must wake up accordingly. But because of this, my body gradually became sick and it caused a vicious circle. Only then did I learn that it’s not about the military-style corporate culture. I thought to myself that maybe a company itself is not suitable for me.

KH: Isn’t being a freelancer difficult as well?

Seo: When you’re in an organization, the rigid culture is very difficult to handle. When I work overtime for work that I am responsible for, I feel a sense of accomplishment. But sometimes I’m working overtime just to wait for my boss to finish dinner or attend a meaningless meeting. Working as a freelancer is nothing like this. As long as I show good results, I can schedule my own time freely without anyone having to bother me. Scheduling time for myself and working efficiently are the benefits, but not having a single protection is the issue.

KH: What are the merits of being a freelancer?

Seo: The ability to adjust and control your schedule is a huge plus. In the early stage, before you secure a good position, you think it doesn’t make sense to refuse certain work even when they are unjust or weird in some ways. Some say this would help you learn things, others say it is a social work that is beneficial for society. After various experiences, I can now tell what the client is trying to do by just listening to what they are saying. Oh, he’s trying to cut the price, or trying to make me work during the weekend. After this phase, it is easier to control my schedule.

KH: You suggest freelance workers should experiment with as many things as possible.

Seo: We should try as many things as possible. There are two aspects of this. The first would be the position of myself as a freelancer. My first attempt for diversification was made when I started my personal blog as a hobby where I would just upload small comics that I drew. But that somehow led to online comics and the experience from drawing the comics eventually led to illustration work for my book, and so on. It created a synergy and I should’ve done this from the beginning.

KH: Have you painted before?

Seo: I haven’t had any professional training on how to draw, but throughout middle school and high school, even in college, I would just scribble on the side of my textbooks. When I started my blog, I couldn’t even draw something close to what I am drawing now. During that time my goal was to just upload one drawing every day. Whether I can do it well or not, I just promised to upload at least one drawing every day. So I basically drew every day for 3 years.

KH: What should people do before jumping into the freelance field?

Seo: You have to calculate the monthly living expenses you need after quitting your job and how you can manage to have that money. It is different for each individual so it is important to objectively weigh your situation and then decide. It is also a good idea to learn while you’re working at the company. I recommend starting with something very small such as uploading writing every day on your blog, Instagram or social media.

Seo: I am very shy and awkward when I film or take photos. I am not the type of person who would do YouTube, and I’m also very afraid of harsh comments since I easily get hurt by them. I used to only upload drawings on my blog or Instagram. At first, I thought of not exposing my face and rather have a drawing, like a character, come out instead of me. However, if I have a drawing, or something that is not me, to talk about my story, people may doubt my story and question if it is real. So I decided to have courage and reveal myself.

KH: What are your future plans?

Seo: I tend to dabble in multiple things. I translate, write books and do YouTube. I also give lectures and interviews, so at one point I feel very tired. One advantage of a freelancer is that I can just have an entire day off. This week I just decided it to be on Saturday. When I do this, I feel something close to catharsis. I can take a day off freely, while salaried workers can’t do this, can they?