A go-to expert on South Korea-Japan relations, he is bombarded with requests for media interviews and guest lectures as the two neighbors are embroiled in their worst dispute in years.

Seeing no easy resolution to the current standoff, which was set off earlier this month by Japan’s decision to impose export restrictions that will seriously impact Korean computer chipmakers, Hosaka was bracing himself for a hectic, restless summer.

“Neither Japan nor Korea is likely to budge,” said the 63-year-old political science professor in an interview. 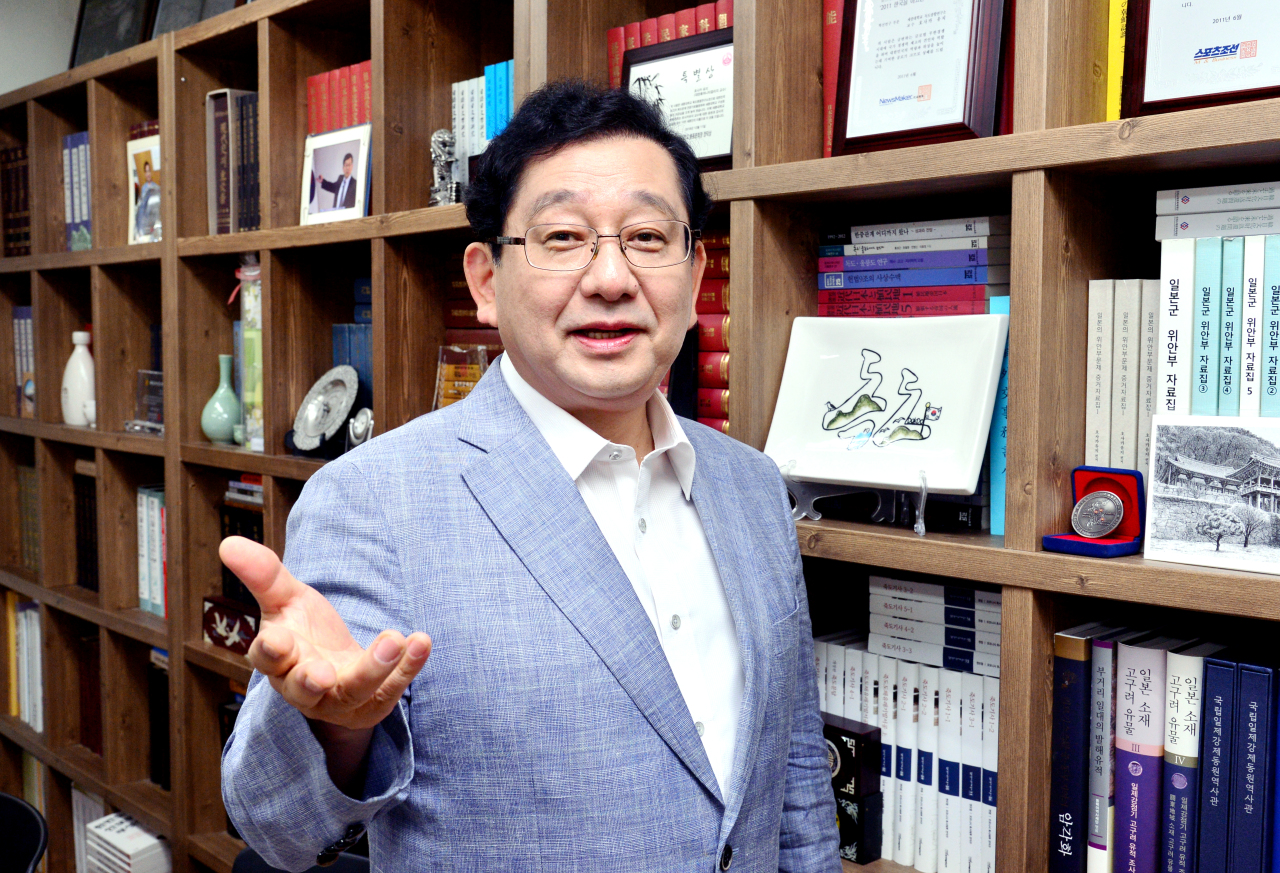 Professor Hosaka Yuji poses for a photograph at Sejong University in Seoul. (Park Hyun-koo/The Korea Herald)
Born and educated in Japan, Hosaka is a naturalized Korean who has dedicated his career to the study of Korea-Japan relations. When he addresses this issue, he strives to explain not just where the two sides stand in this conflict, but where they’re both coming from and what’s underneath the surface.

In a nutshell, he thinks a flare-up was in the works for a long time because the two East Asian neighbors -- the colonizer and the colonized during the years 1910-1945 -- pursued extensive economic, social and cultural exchanges without fully coming to grips with core aspects of their shared history.

In 1965, two decades after Japan’s 35-year colonial rule abruptly ended in Korea following the US’ atomic bombing of Hiroshima and Nagasaki, the two sides normalized relations. But it was with a series of ambiguous agreements which, above all, failed to address the illegal and criminal nature of Japan’s annexation of Korea.

“Ever since the far-right politicians, who do not acknowledge the illegality of Japan’s occupation of Korea, rose to power in Japan, bilateral ties have never been in good shape,” Hosaka said. He was referring to incumbent Japanese Prime Minister Shinzo Abe, whose maternal grandfather was a Class A war criminal and who has vowed to free Japan from the US-imposed “postwar regime” by revising the country’s pacifist constitution.

On Japan’s latest move to curb exports of hi-tech materials vital to the production of semiconductor chips and display panels, Hosaka had few words of praise for the Abe administration.

To Hosaka, it’s clear that Tokyo, despite billing itself as a champion of free trade, is using trade as a weapon to retaliate against Seoul over a Supreme Court ruling here affirming that Japanese firms must pay damages to Koreans who were forced into slave labor during World War II.

It was during the Park Geun-hye administration in Korea and the focal center of the feud was Japan’s liability for the plight of former “comfort women” -- young girls and women from Korea and other Asian countries who were repeatedly raped by Japanese soldiers during the war in frontline military brothels.

In 2015, however, Seoul and Tokyo reached a compromise deal on the issue and Japan swept the retaliation plan under the rug. But President Moon Jae-in, who succeeded Park in Seoul, backpedaled from the agreement, calling it seriously flawed. This, combined with the forced laborer issue, prompted the Abe administration to take vengeance.

“For them, it is not just about the money. It is linked to the fundamental question of whether to admit the criminality of Korean occupation,” Hosaka said.

The professor went on to criticize the Abe administration’s stance that compensation issues stemming from the colonial era were fully settled in the 1965 treaty, when Japan provided $300 million grant in economic aid.

This, in his view, contradicts what a previous Japanese government declared in 1991 in the Japanese parliament. On two occasions, Japan acknowledged that the rights of individuals to file claims had not been terminated.

“There were mistakes on the side of the Moon administration in Seoul, but what Japan is doing now is disproportionate by far,” he said.

Public sentiment in Japan will determine how things will play out, he predicted. Japan will hold an Upper House election July 21, where Abe’s Liberal Democratic Party and its junior partner, Komeito, are expected to form a majority coalition.

It was his desire to know the truth about Japan’s colonial rule of Korea that brought a young Hosaka, then a Tokyo University graduate, to Seoul in 1988.

After studying political science at Korea University and earning first a master’s degree and then a Ph.D, he delved into the question of which country rightfully owns Dokdo, a set of rocky islets in the body of water between the two countries. His focus eventually widened to other controversies, such as the demands of the former comfort women.

Now, after decades spent poring over old Japanese documents and records, he has published several books that deal with the history between the two countries.

In late June, just days before the trade row erupted, the professor launched his YouTube channel, “Hosaka Yuji’s Fact TV,” in an effort to correct misconceptions.

“There are so many nonfacts disguised as facts, and so many distortions,” he said in a video introducing his channel.

So far he has uploaded 10 video lectures, each around 12 minutes long. He had around 78,000 subscribers as of Friday.

Not being social media savvy, he relies on outsourcing for much of the filming, editing and uploading.

“I heard young people do their searches on YouTube nowadays,” he said when asked why he chose the video platform.

His tenure at Sejong University ends in early 2021, but the scholar has no plans to retire. He’s on a self-imposed mission to let people know what really happened between Korea and Japan, and there’s still so much work to be done.

“It is a tragic thing for people like me. There are so many Japanese living in Korea and vice versa. Many Japanese youngsters like Korea so much that the hashtag ‘韓國人になりたい’, meaning ‘I want to be a Korean,’ was once trending,” he said. Hosaka has two children with his Korean wife.