[ The Korea Herald – Send E-mail ]
[Herald Interview] ‘Men taking parental leave first step to reducing gender inequality’
By Ock Hyun-ju
Published : Jul 2, 2019 - 17:58
Updated : Jul 2, 2019 - 22:04
Men should be allowed and expected to take parental leave and attend to their children’s needs as the first step to achieving gender equality at work, according to a prominent US feminist scholar.

To encourage men to take parental leave more freely in a society where those who choose to do so are seen as poor workers and ineffectual men, the government should put in place a “daddy quota,” Joan C. Williams, a professor at the University of California, Hastings College of the Law, said Monday during an interview with a group of reporters. 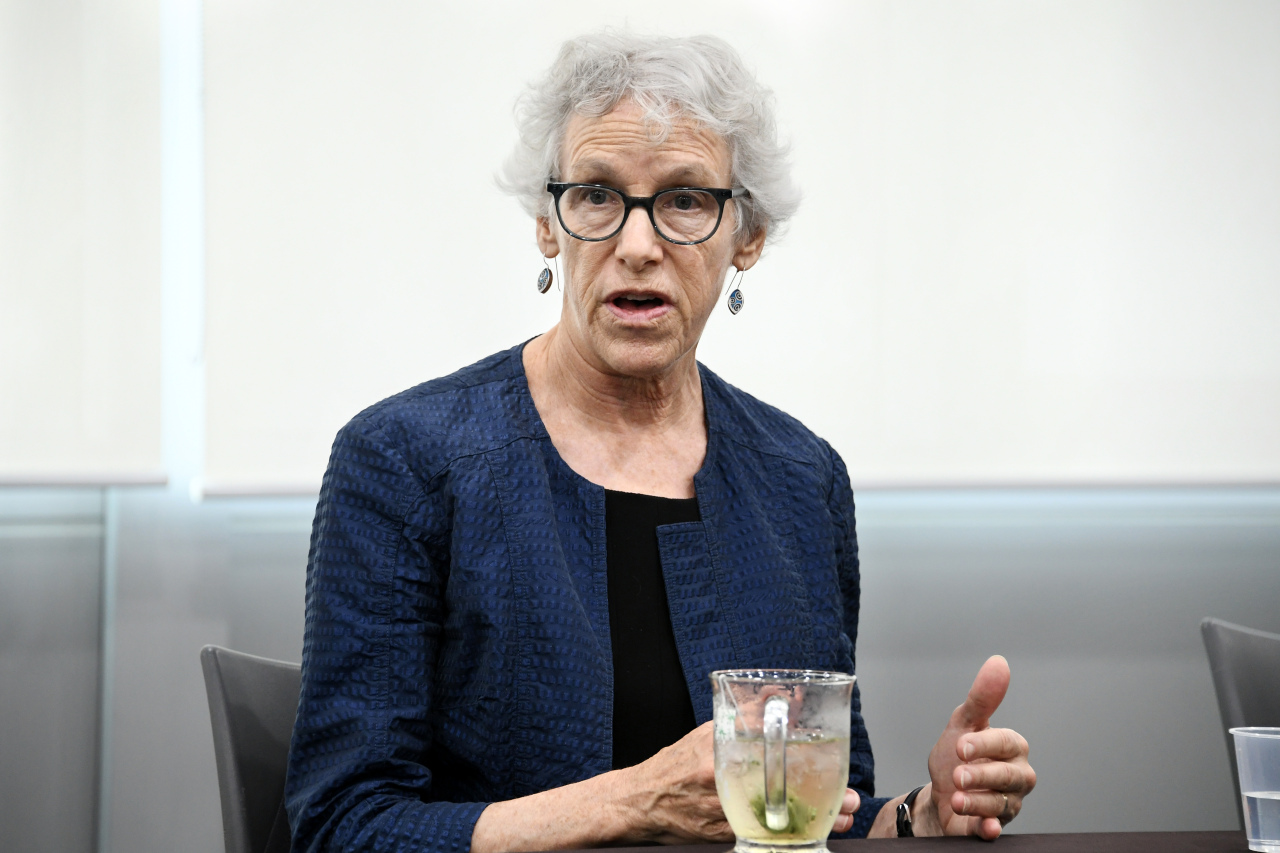 Joan C. Williams, a law professor at the University of California’s Hastings College of the Law, speaks during an interview with a group of reporters at Seoul City Hall, Monday. (Seoul Metropolitan Government)
And it is important to provide workers with higher pay while they are on leave to encourage men to use it, said Williams, who visited Seoul at the invitation of the Seoul Metropolitan Government to mark Gender Equality Week.

“If men have to make a big financial sacrifice, they won’t take the leave because they want to see themselves as breadwinners,” said Williams, who is also founding director of the Center for WorkLife Law at the university and has authored several books including “White Working Class: Overcoming Class Cluelessness in America.”

According to a survey of 633 working parents conducted by a state-run support center for working moms in northwestern Seoul, 63.5 percent of the respondents said they had never taken parental leave. As to the reasons, 30.3 percent said they were concerned about what their employers would think and 21.7 percent cited the financial burden.

“The important model is in Scandinavia. The only effective way that has ever been found to have men take parental leave is to have the daddy quota,” she said, referring to a system in which a certain amount of leave has to be taken by fathers, or the family loses that time off.

Studies show that men who take parental leave are often seen as inappropriately feminine or as poor workers, which forces men into a “masculinity contest at work” and discourages them from taking parental leave.

“But if the family stands to lose the leave if the father does not take it, then that so-called ‘flexibility stigma’ disappears and men start to take leave,” she said. “Even if men believe in gender equality, they will not act on it if it threatens their status at work.”

Williams also noted that the definition of an “ideal worker” has to change.

In workplaces around the world, women have long been pressured to display traditionally masculine behaviors to be successful at work -- from keeping workaholic hours to taking part in after-hours drinking sessions. This, coupled with entrenched gender roles, has forced women to choose between motherhood and work -- between being ideal mothers or ideal workers.

Such ideals drive mothers out of work and lead to lower birth rates, a long-term threat to the country’s economy.

“Perhaps the single most effective thing Korea could do is to define the ideal worker as someone who works 40 hours a week,” she said during a lecture at Seoul City Hall.

“True gender equality requires starting from a society’s assessment of how much our children need, and then designing the ideal worker to reflect the values people hold in family life, assuming equal division of labor between the parents.”