The meeting with Xi, Moon’s first engagement in Japan, comes less than two weeks after the Chinese leader’s trip to Pyongyang amid hints from US President Donald Trump that denuclearization dialogue could resume. 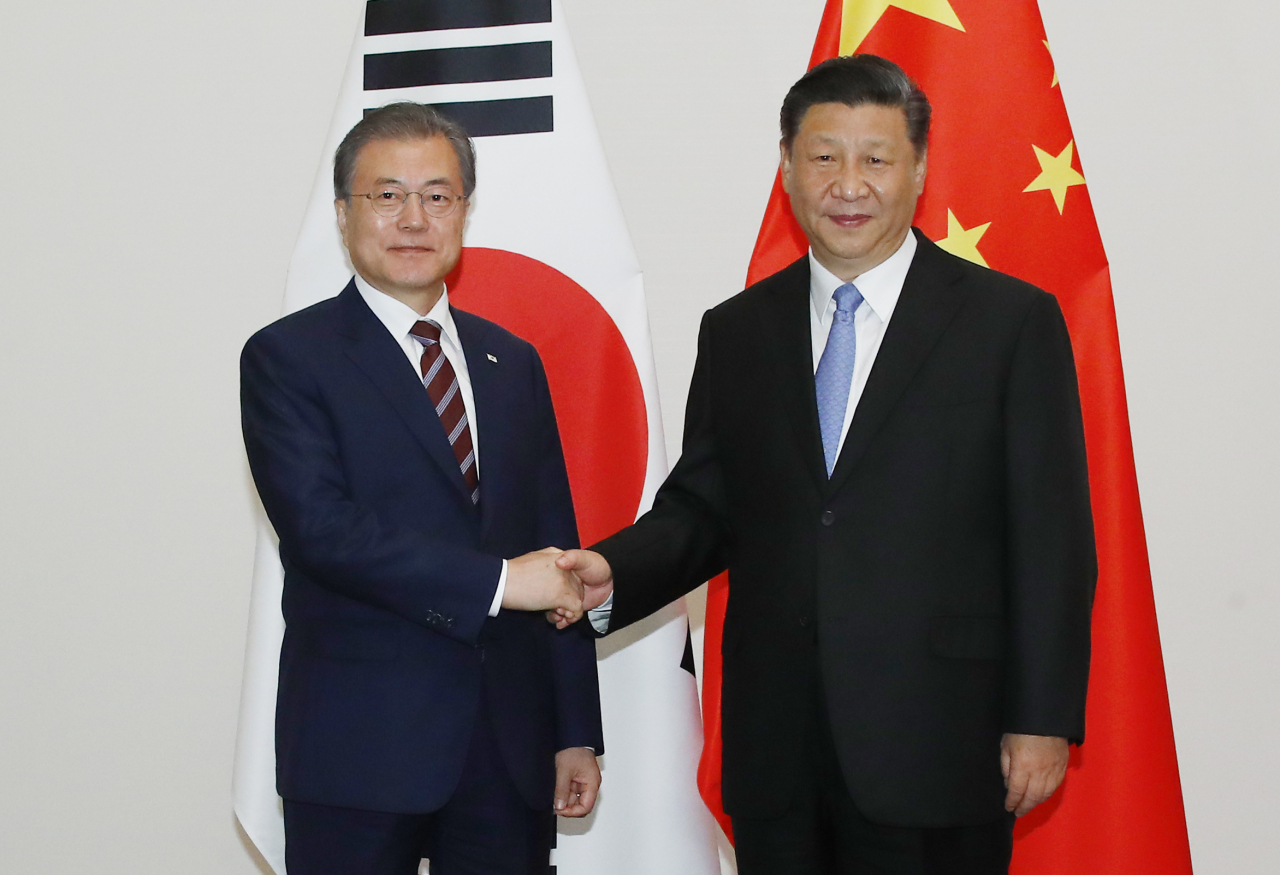 South Korean President Moon Jae-in (left) and Chinese President Xi Jinping shake hands during their summit in Osaka, Japan on Thursday. (Yonhap)
According to Cheong Wa Dae, Moon and Xi discussed ways to cooperate for denuclearization of the Korean Peninsula and to increase bilateral cooperation, including more direct interactions between high-level government officials.

Regarding denuclearization and Moon’s drive to establish permanent peace on the peninsula, the two leaders agreed that the ongoing talks are essential, according to Cheong Wa Dae.

As for Xi’s trip to Pyongyang, where he held his fifth meeting with North Korean leader Kim Jong-un, Cheong Wa Dae said that the Chinese leader shared information in detail, and the two had “strategic communication” on Korean Peninsula issues.

While in Pyongyang, Xi said that China supports the resolution of issues on the Korean Peninsula by political means and is willing to do what it can to address North Korea’s “reasonable security and development concerns.”

Seoul’s presidential office said that Moon expressed hopes that China will play a constructive role, saying that Xi’s trip to Pyongyang came at a critical point in the denuclearization process.

Inter-Korean and US-North Korea dialogue have been at a standstill since the end of February, when the second Trump-Kim summit ended without an agreement.

Trump and Kim have since exchanged personal letters, but little else has taken place.

Moon has also called for another meeting with Kim, most recently during his trip to Europe earlier this month.

At the time, Moon said that meeting Kim before the South Korea-US summit was desirable, but the North had not responded. Moon is set to meet Trump in Seoul on Sunday.

Regarding Seoul-Beijing relations, Moon and Xi agreed to seek stronger cooperation in a range of areas, including economic, environmental and cultural issues, Cheong Wa Dae said.

Seoul’s presidential office also said that the two leaders agreed on the need for Xi to visit South Korea.

Following the summit, Moon was set to wrap up the day with a meeting with Japan-based Koreans. On Friday, Moon is scheduled to attend G-20 Summit conferences and a string of bilateral summits.

In addition to meeting Xi, the South Korean president is set to hold summit meetings with several heads of states including Russian President Vladimir Putin during his three-day stay in Japan.