The annual roundtable of IP5 kicked off on Tuesday to run through Thursday, marking the third such event to be held in Korea, since the first in 2008 on Jeju Island and the second in Busan in 2014. 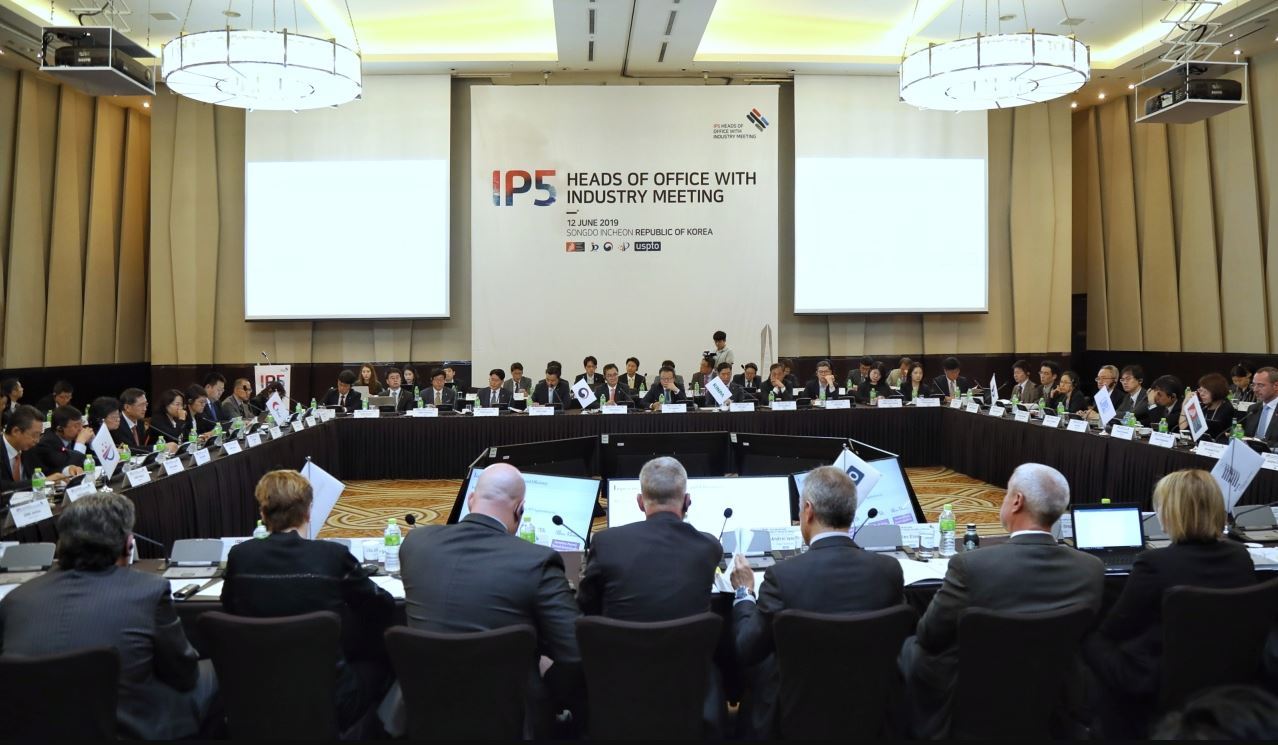 KIPO chairs the IP5 meeting with industry representatives at Sheraton Grand Incheon on Wednesday, the second day of the annual IP5 roundtable. (KIPO)
The consultative body, initiated in 2007, is deemed one of the most influential organizations in IP system development and related policies. The five member states -- United States, Japan, European Union, China and Korea -- together account for over 85 percent of patent applications worldwide.

Attending this year’s meeting were around 100 key officials, including the chiefs of the IP5 offices, director general of the World Intellectual Property Organization and user group representatives, according to KIPO officials.

Facing the growing leverage of the fourth industrial revolution, IP policymakers placed focus this year on improving patent information access and the impact of artificial intelligence. 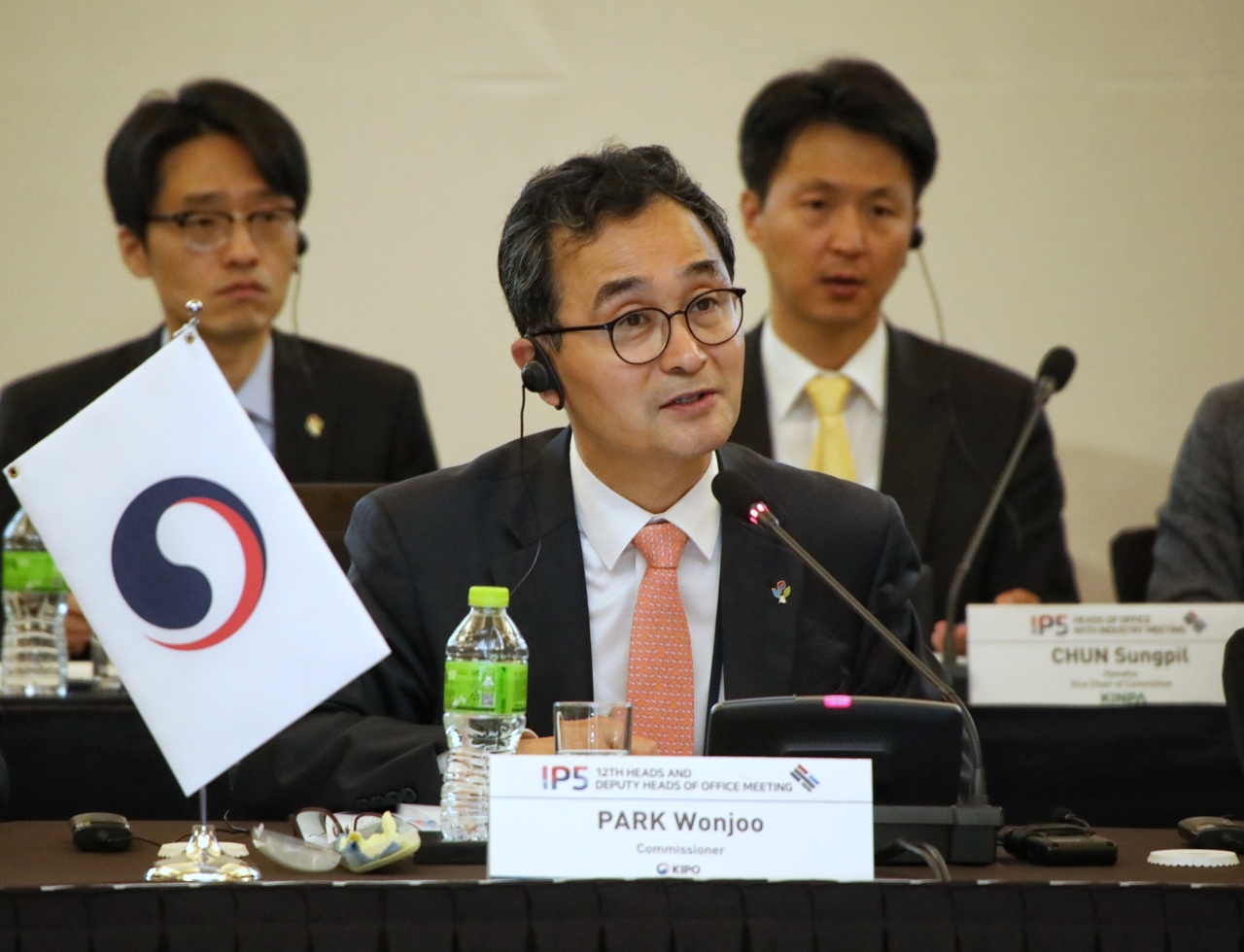 KIPO chief Park also worked on enhancing bilateral partnerships through individual head-level meetings held on the sidelines, ahead of the IP5 head roundtable slated for Thursday.

On Tuesday, he met with EPO President Campinos to sign a memorandum of understanding to test a sharing process of screening information.

Currently, KIPO and EPO have access to each other’s patent screening data but the range is limited to patents that are past 18 months from application and are thus subject to public disclosure. Should the MOU take effect, starting July 1, the two offices will be able to access to undisclosed patent data for screening reference.

Patent applications are generally published 18 months after the earliest priority date of application, until which the given data is confidential.

But with the global trend of speeding up the screening process and shortening the registration period, there is a growing need for patent offices around the world to exchange data on undisclosed patents of other countries, according to KIPO.

In the case of Korea, 56.5 percent of the 92,690 patent applications in 2018 were screened before the 18-month disclosure timeline, data showed.

The KIPO commissioner also sat with his US counterpart Iancu to discuss ways to enhance bilateral and multilateral partnerships. They also renewed the bilateral MOU on patent classification cooperation which has been active since 2014 and is set to expire this year. 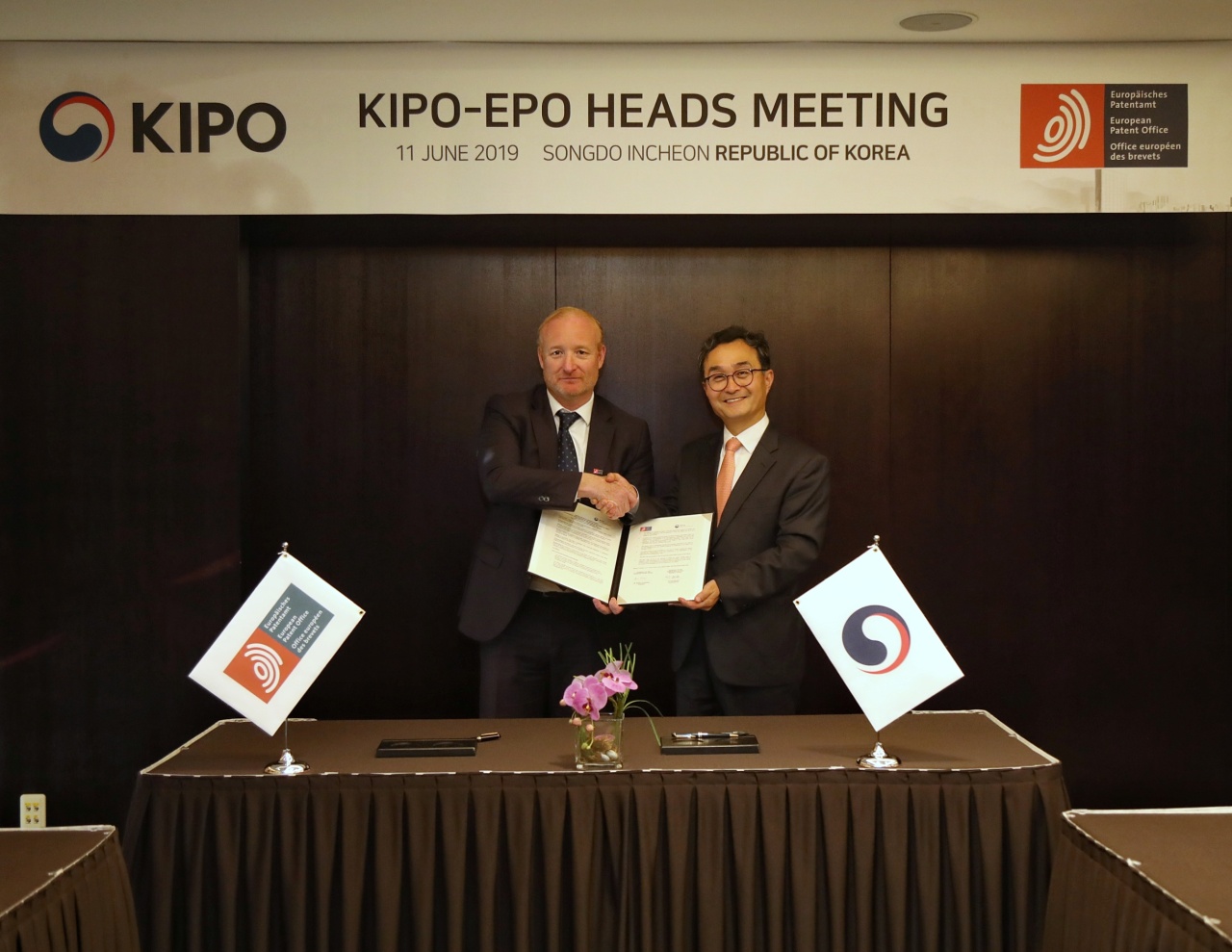 Based on the discussions and networking, the IP5 heads will meet for a head-level roundtable on Thursday to approve a series of joint measures to improve patent information access and harmonize practices and procedures. They will also reiterate vows to enhance partnerships in responding to technological changes such as AI.

“If we form a top-level consensus on agendas that have so far been dealt with at working levels, Korean companies will be able to acquire patents in IP5 states at a faster process and lower costs,” Park said.

The country also tops in terms of patent applications relative to its gross domestic product and population, reflecting its active involvement in the creation of intangible knowledge-based assets.

As of end-2017, the number of patent application per one million population reached 3,091, while the corresponding figure for $1 billion stood at 86.1, according to WIPO statistics.

Korea is also a conative participant in the Patent Treaty Cooperation, with 17,017 PCT patent applications as of end-2018, ranking fifth in the world, next to the US, China, Japan, and Germany. In 2007, the Korean language was added to the list of official PCT publication languages -- following English, French, German, Japanese, Russian, Spanish, Chinese, Arabic and Portuguese.

“As a member state of IP5, as well as TradeMark5 and Industrial Design 5, Korea is deemed a powerful nation in the field of IP,” KIPO said in a release.

“This is equivalent to the status of permanent member states in the United Nations Security Council.”