Ahn is one of the first recipients of the “Youth Basic Income” -- 1 million won given to every 24-year-old citizen of Gyeonggi Province over the course of a year.

“It is not a lot of money, but it helps me feel more stable emotionally,” Ahn said, adding he uses the money to buy food mostly.

“We cannot live properly on 250,000 won only every quarter. It is just the minimum social safety net. We need to work and earn more money,” he said.

A basic income is a periodic cash payment unconditionally delivered to all on an individual basis, without a means test or work requirement. The unconditional grant is paid at regular intervals.

In South Korea, where social security benefits are largely provided selectively based on individuals’ income levels, a variety of experiments involving basic income -- albeit limited -- are emerging amid a widening wealth gap.

While critics dismiss the idea as populism, those campaigning for a basic income program argue that it is inevitable as fears about the impact of automation grow in the age of Industry 4.0. 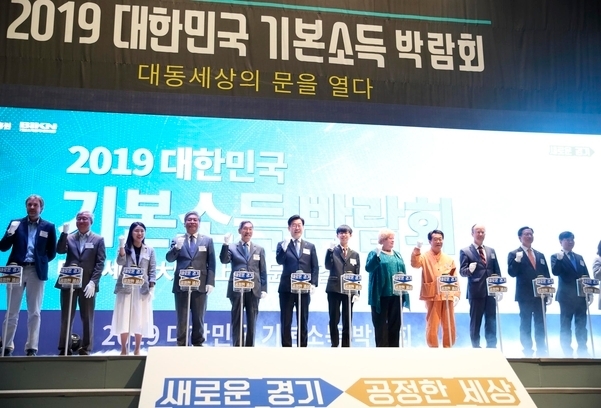 Participants, including Gyeonggi Gov. Lee Jae-myung, pose for a photo at the 2019 Basic Income Exhibition that ran from April 29-30. (Gyeonggi Provincial Government)
Experiment in Gyeonggi Province

In Korea, the idea of basic income has been floated for a decade. But it is only recently that the debate on the amount and source of funding gained traction, after Lee Jae-myung first introduced the youth allowance program in 2016 as the mayor of Seongnam, Gyeonggi Province.

In April, Lee, who won the Gyeonggi Province governorship in 2018, launched the Youth Basic Income program across the province, which is the most populous in the country with a population of 12.34 million as of 2014. Gyeonggi Province encompasses 31 cities or counties surrounding Seoul.

“The basic income will be an alternative to realizing a fairer world in the era of the ‘fourth industrial revolution,’” Lee said in his opening remarks at the 2019 Basic Income Exhibition, which ran April 29-30.

Upon submitting an online application, qualifying 24-year-olds are given 250,000 won in the form of “local currency” every quarter for a total of 1 million won over a year. The local currency can be used at traditional markets, restaurants and shops in Gyeonggi Province, which officials believe will also boost the local economy.

No conditions -- such as job-search efforts or parental income levels -- are attached.

For now, the youth allowance is limited to 24-year-olds due to budget constraints. Yet, it is the world’s biggest experiment in sample size.

“We chose the age group because they are excluded from the social safety net in the process of entering the labor force,” said Yoo Young-seong, a senior research fellow at the Gyeonggi Research Institute. “On the whole economy, the impact of the allowance will be limited, but we expect it to greatly help that specific age group.”

Gyeonggi Province is now collecting data and conducting surveys to evaluate how the unconditional financial benefits impact the lives of the recipients, with the results to be released at the end of this year.

“For example, we ask them what they eat, whether they worked part-time less and whether they had more time to prepare for their future,” he said. “If it turns out to be effective, we would be able to expand the program to other age groups or nationwide.”

A basic income experiment for farmers is underway as well.

Haenam-gun, South Jeolla Province, became the first municipality in the country to grant an allowance to 15,000 farmers.

Regardless of the size of their farmland, each farmer will be given 50,000 won a month in the form of local currency starting in June, totaling 600,000 won a year.

Both North Jeolla and South Jeolla provinces are in the process of revising their ordinances to implement the basic income system starting in 2020. Other counties, cities and provinces are also discussing whether to adopt similar programs.

Growing inequality and the job losses that are likely to go hand-in-hand with automation are major reasons the debate on basic income is now gaining momentum, according to experts.

“In the past, high-quality jobs were abundant in supply. But now, they are not available for everyone amid widening inequality and automation,” said Kang Nam-hoon, who heads the Korean affiliate of the Basic Income Earth Network. “It is the spirit of the era.

“If a basic income were provided, people would be able to explore their interests and get jobs they found meaningful instead of focusing their energy on getting stable jobs at a handful of conglomerates or the government,” said Kang, a professor at Hanshin University.

According to a survey of 3,873 Koreans released Sunday by the Korea Institute for Health and Social Affairs, 85.4 percent of respondents agreed that the income gap in Korea is wide. Some 55 percent said it is the government’s responsibility to narrow the income gap.

Advanced technologies will make it possible to create more wealth with less or no labor, which basic income activists believe will make the owners of capital richer and the workers poorer. They say basic income is key to fairly redistributing prosperity and tackling the widening income inequality.

Critics of the basic income, on the other hand, cite what they see as the inefficiency of the system, saying social welfare budgets should focus on supporting those facing greater financial difficulties.

“With the enormous amount of funds (used) for the basic income, we could enhance the existing social safety net,” said Yang Jae-jin, a professor at Yonsei University. “The principle of social welfare for the working-age population is to provide them support only when they are in a situation where they cannot work.

“The allowances for the unemployed or those taking parental leave are given only for a certain period, which is meant to encourage them to return to work,” he said. “Without people working, productivity will shrink. If an economy doesn’t run, how could we maintain the social safety net?”

As for the funding of the basic income program, Kang suggested the government levy taxes on real estate -- an unearned source of income.

Geum Min, head of the Institute for Political and Economic Alternatives, suggested raising tax payments to the average level of member states of the Organization for Economic Cooperation and Development.

Korea’s estimated tax revenues as a percentage of gross domestic product stood at 20 percent as of 2017, according to 2018 OECD Revenue Statistics, the seventh lowest among 33 surveyed member countries. The average tax-to-GDP ratio in OECD countries was 34.2 percent in 2017.

“We could also think about other sources of funding -- such as by imposing taxes on data created by global IT companies or land,” he said.

Other ideas being discussed as means of funding the basic income program include the imposition of taxes on intellectual property rights, carbon emissions or natural resources.