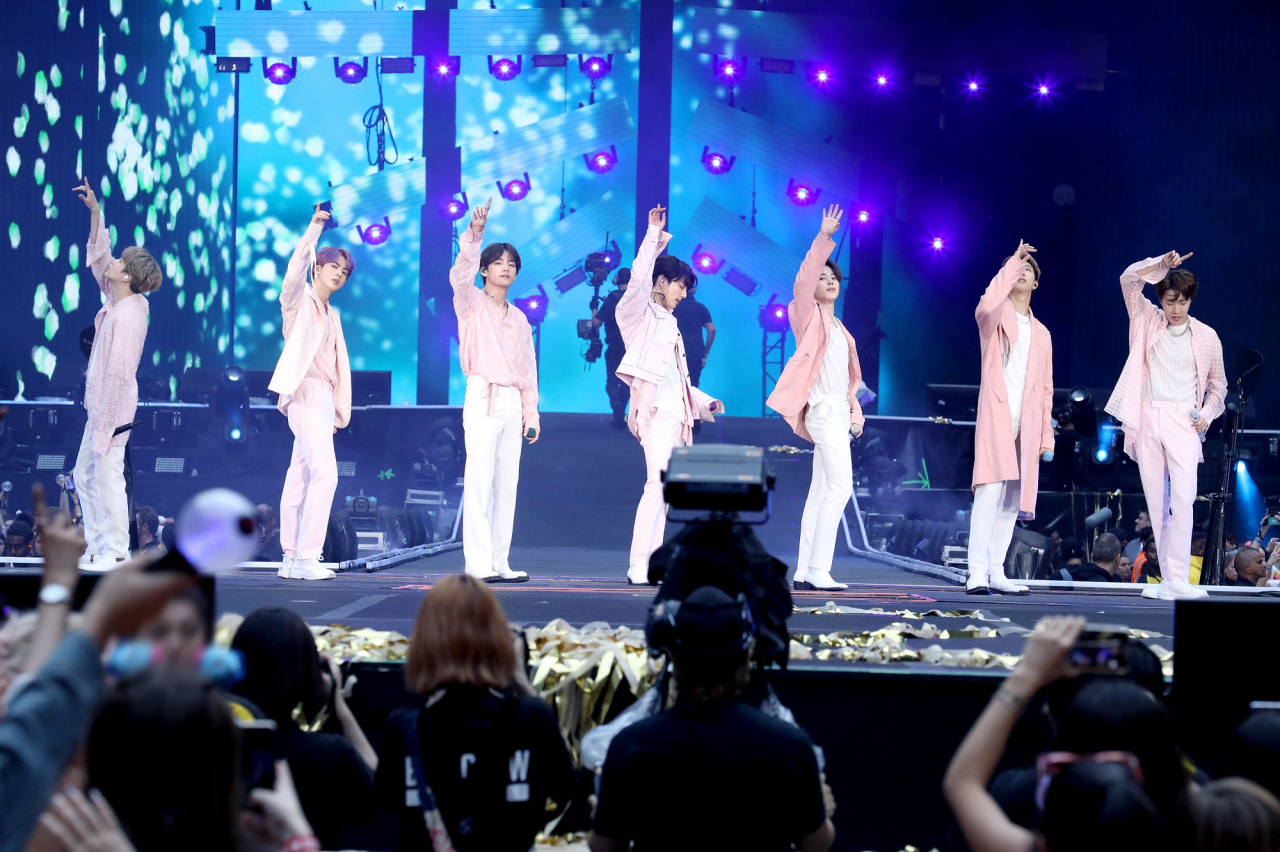 (BigHit Entertainment)
The first of two sold-out concerts was attended by 60,000 fans, who sang-along, chanted, screamed and danced throughout the performance that lasted for 150 minutes. The group performed 24 tunes, including those from its “Love Yourself” series and latest chart-topping album, “Map of the Soul: Persona.”

Calling the venue a “dream stage,” the septet expressed excitement, joy and gratitude at being able to perform at Wembley as part of its ongoing world tour, “Love Yourself: Speak Yourself.”

BTS had initially planned to perform just one night in the British capital, but tickets had sold out within 90 minutes, prompting the band to add the second concert on June 2. In total, 120,000 fans will watch the two concerts.

“Wembley holds huge significance,” Suga told reporters at a press conference before the first show. “As a singer, there are some dream stages. Since I was young, when I watched Queen at Live Aid, I have dreamed of performing here. I couldn’t sleep last night, thinking that I am performing at Wembley.”

“Finally, we’ve made it to Wembley Stadium, where everyone has been waiting with anticipation,” said J-Hope. “We are truly honored, and thankful to our fans. Our hearts haven’t changed much. As artists who love performing, we will enjoy it and do our best. We will make BTS history in this historic place.”

“We had originally planned one concert in London. But thanks to Armys and your support, we have added one more date. We will try our best on the stage in return,” said Jungkook.

“Thank you for coming all the way to the UK,” said Jin. “Many popular musicians are from the UK and it’s an honor to perform in this country.”

Dubbed the “21st-century Beatles,” BTS commented on the comparison to the legendary British band. 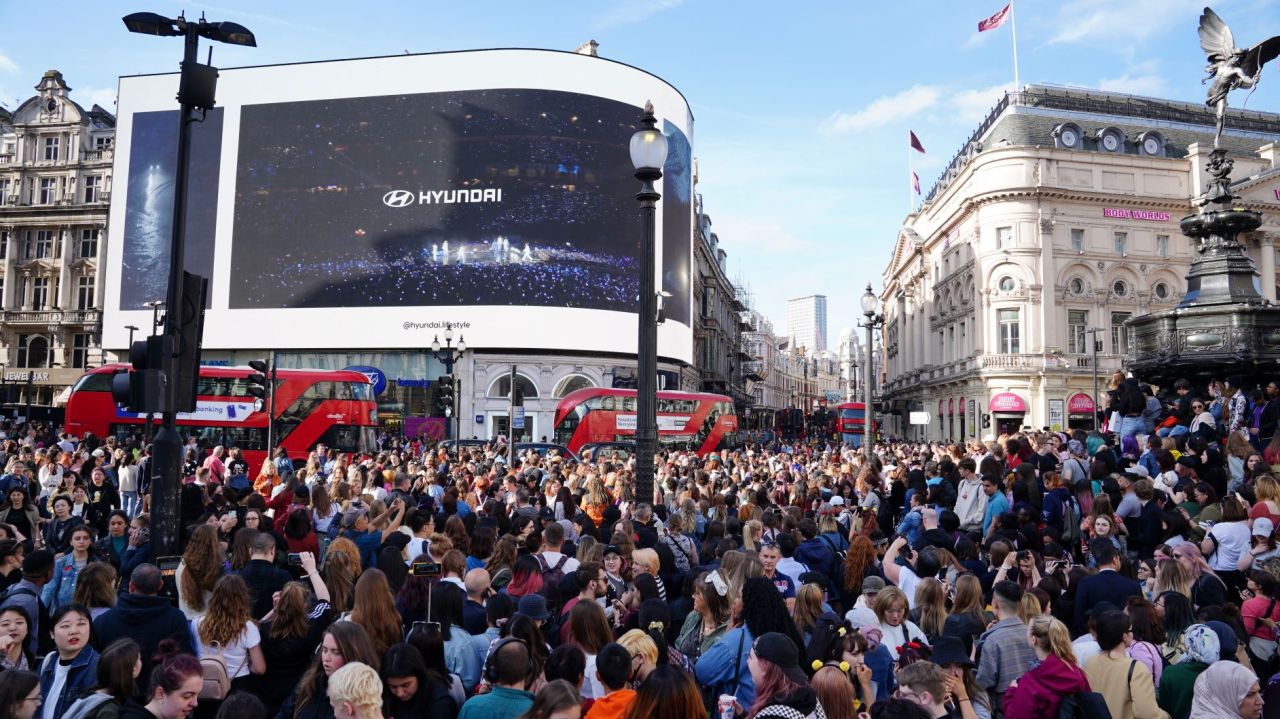 “All popular boy bands in the history of music have always been compared to The Beatles. I think it’s fair to say a lot of musicians have been influenced by The Beatles,” said RM, adding the bandmates were wearing Thom Browne, referring to grey suits that reminded reporters of The Beatles’ fashion.

“In the US we were lucky to do an homage to The Beatles during ‘The Late Show with Stephen Colbert.’ We were very grateful to be called that, and it makes us feel that we are doing good. It’s an honor.”

Asked about hopes for collaborating with UK bands in the future, V expressed his love for Coldplay, while RM said it would be an honor to work with Paul McCartney.

The band’s first concert at Wembley was livestreamed globally via Naver’s V Live platform, with more than 140,000 watching simultaneously, including those from the US, Japan, Taiwan, China and Korea.

“We are live-broadcasting a concert for the first time, so we want to deliver the excitement of Wembley as much as possible so that more members of our Army (BTS fandom), can enjoy the concert,” said J-Hope.

Wrapping up the first night, the bandmates expressed their gratitude to concertgoers, who held up the glowing “Army Bomb” -- the band’s official light sticks connected via Bluetooth -- and turned on the lights on their phones.

“You guys always had the greatest artists, historically, in the music industry -- The Beatles, Coldplay, Ed Sheeran, Adele. We don’t even have to make a list,” said RM. “So the UK was like the big, big wall to me. But tonight, we and you guys broke the wall.” 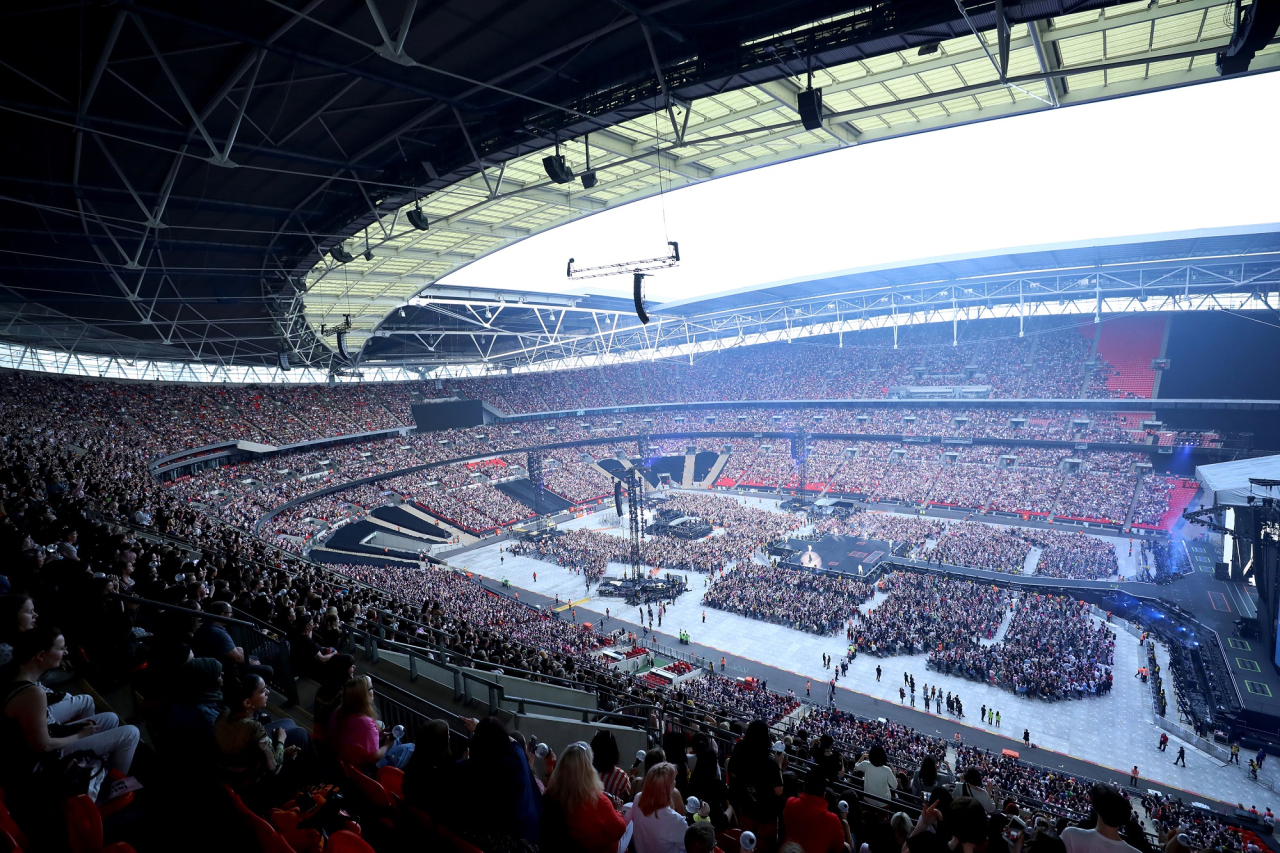 (Yonhap)
“We love you Army, so much from the bottom of my heart,” said Jimin.

More than 100 reporters had attended the press conference, including those from the UK press and more than 30 media outlets from Korea.

“It’s massive, because no Korean group has ever done it before,” said Mark Savage, a BBC music reporter. “The leap in their popularity over the last 12 months has been just incredible.”

“It’s a huge achievement, not only that and to sell-it out, because most bands who perform (at Wembley) don’t sell-out.”

Leading up to the concert, BTS fever descended on London, building up anticipation for the weekend. An official pop-up store for the concert opened in the Shoreditch district from Tuesday to Monday, with fans lining up around the block from early in the morning and waiting in line for more than two hours during peak periods.

The band also rocked the stage for the first time on “Britain’s Got Talent,” performing “Boy With Luv” during the program’s semifinal week Thursday.

On Friday, the eve of the concert, fans gathered at Piccadilly Circus from 6 to 7 p.m. to see Hyundai Motor’s advertisement campaign featuring BTS on the iconic giant screen.

Even without the seven members, there was a festive atmosphere at the event, with fans dressed in BTS gear singing-along to the band’s hit tunes, chanting each member’s name and dancing the night away.