[ The Korea Herald – Send E-mail ]
S. Korea, Switzerland hold policy talks on bilateral cooperation
By Yonhap
Published : May 17, 2019 - 19:28
Updated : May 17, 2019 - 19:28
South Korea and Switzerland held a bilateral policy consultation meeting in Seoul on Friday to discuss security on the Korean peninsula and in Europe, as well as bilateral cooperation, Seoul's foreign ministry said.

Cho called for Switzerland's continued support for Seoul's policy of building trust with Pyongyang and promoting a lasting peace on the peninsula, and Baeriswyl agreed to closely cooperate in the policy endeavors, the ministry said. 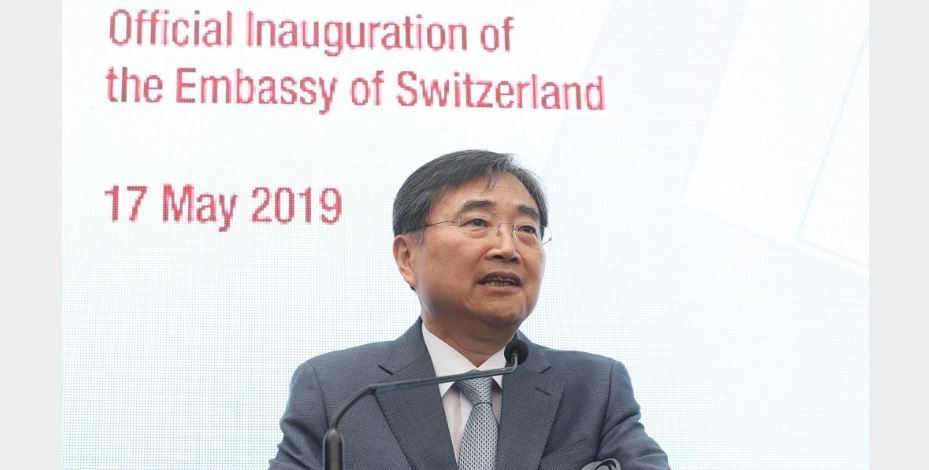 Vice Foreign Minister Cho Hyun speaks during a ceremony marking the opening of the new Swiss embassy building in Seoul on May 17, 2019. (Yonhap)

On the occasion of the meeting, the two sides signed a revision of their convention on the avoidance of double taxation, which was last amended in 2010. The latest revision includes enhancing procedures for a taxpayer to file a complaint when he or she was improperly taxed.

"This policy consultation meeting is evaluated as having served as an opportunity to deepen the friendly and cooperative relationship with Switzerland, which has developed close ties (with South Korea) since the establishment of diplomatic relations in 1963 and contributed to peace and stability on the peninsula," the ministry said.

Switzerland is a member of the Neutral Nations Supervisory Commission, an impartial entity that has contributed to the maintenance of the armistice agreement that halted the 1950-53 Korean War.

Later in the day, the two sides attended a ceremony marking the opening of the new Swiss embassy building in Seoul.

The building has garnered public attention here for its aesthetic motif inspired by Korean traditional houses, known as "hanok." (Yonhap)