[ The Korea Herald – Send E-mail ]
[Seoul Food Alley] Buildings filled with stir-fried Korean blood sausage
By Im Eun-byel
Published : May 19, 2019 - 14:10
Updated : May 19, 2019 - 14:23
Seoul’s alleys are filled with eateries specializing in particular dishes. The Korea Herald takes you on a foodie trip to narrow alleys where decades-old establishments beckon diners with their secret recipes, often handed down through generations. -- Ed.


Though not spread across a labyrinth of narrow alleys, Sillim-dong Sundae Town is still a complex cobweb of eateries.

Sundae, Korean blood sausage, refers to pig intestines stuffed with glass noodles, vegetables and various spices. Often served with tteokbokki, or spicy stir-fried rice cakes, for many it is a popular everyday snack. 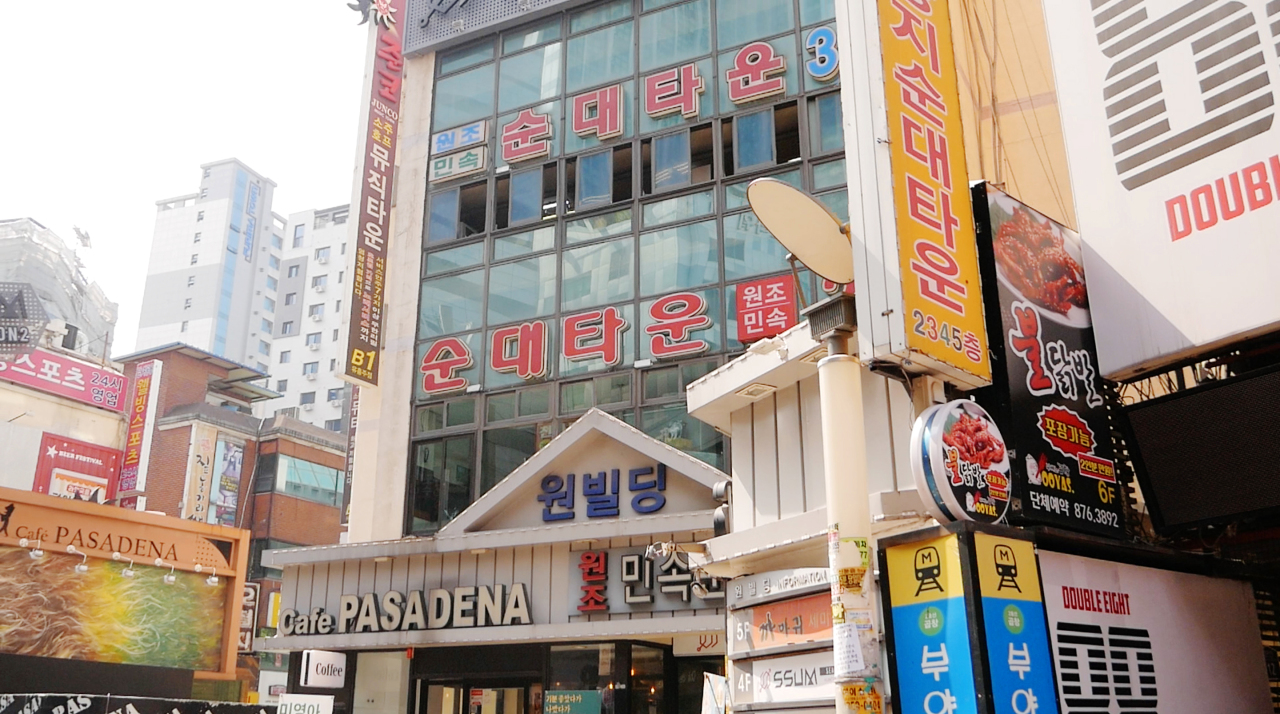 Sillim-dong Sundae Town (Lee Sun-hye/The Korea Herald)
As the name suggests, the “town” is situated near Sillim Station in southwestern Seoul. As sundae is a common dish, one does not have to visit the area to try it -- but a visit here offers an exciting experience for sundae enthusiasts. 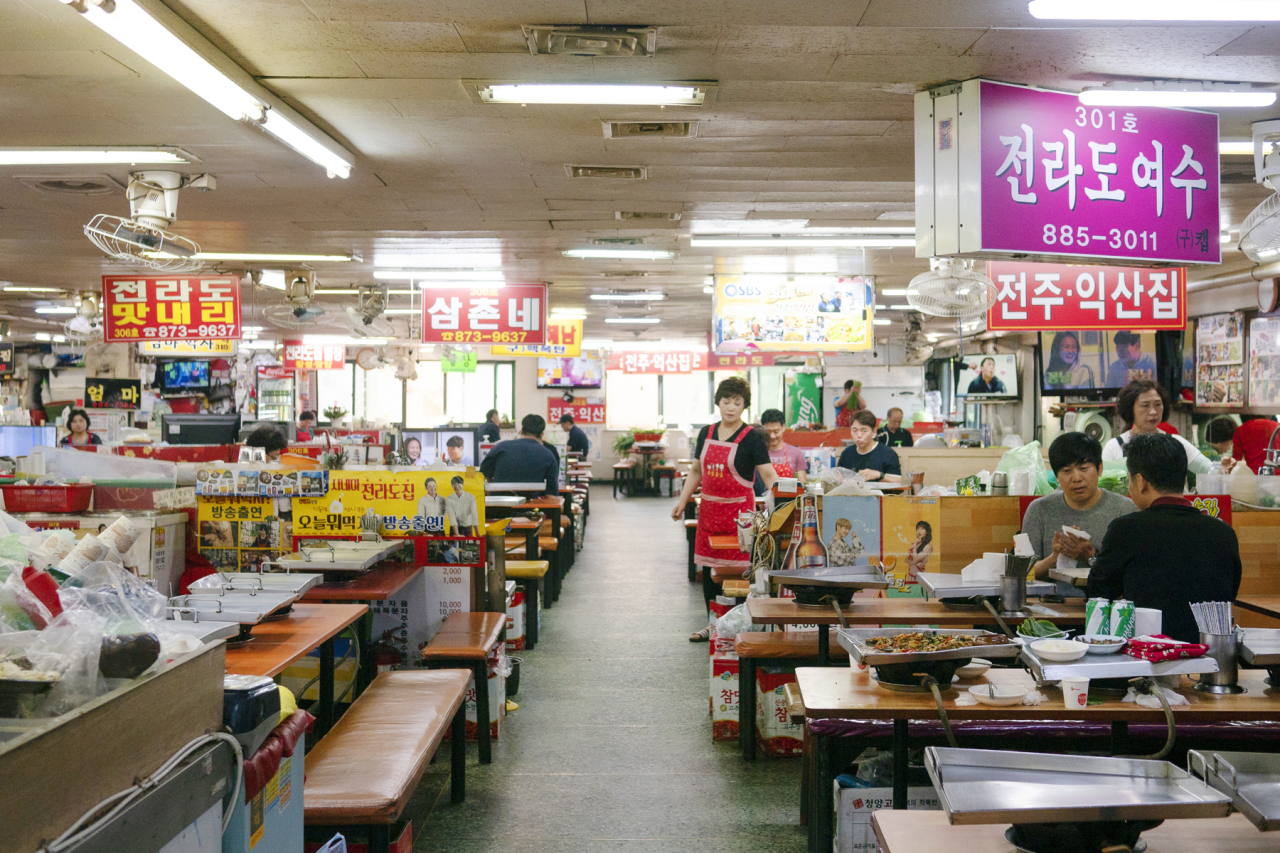 Sillim-dong Sundae Town (Lee Sun-hye/The Korea Herald)
The restaurants used to be spread out across the cobweb of alleys in Sillim-dong like many other “food towns” in South Korea. But in 1992, they moved into the new buildings, opening up a new era for the neighborhood.

On each of the two floors, around 30 identical stores serve sundae. The eateries are not large -- each one covers around 9 square meters. They are separated by low partitions, without walls or doors. 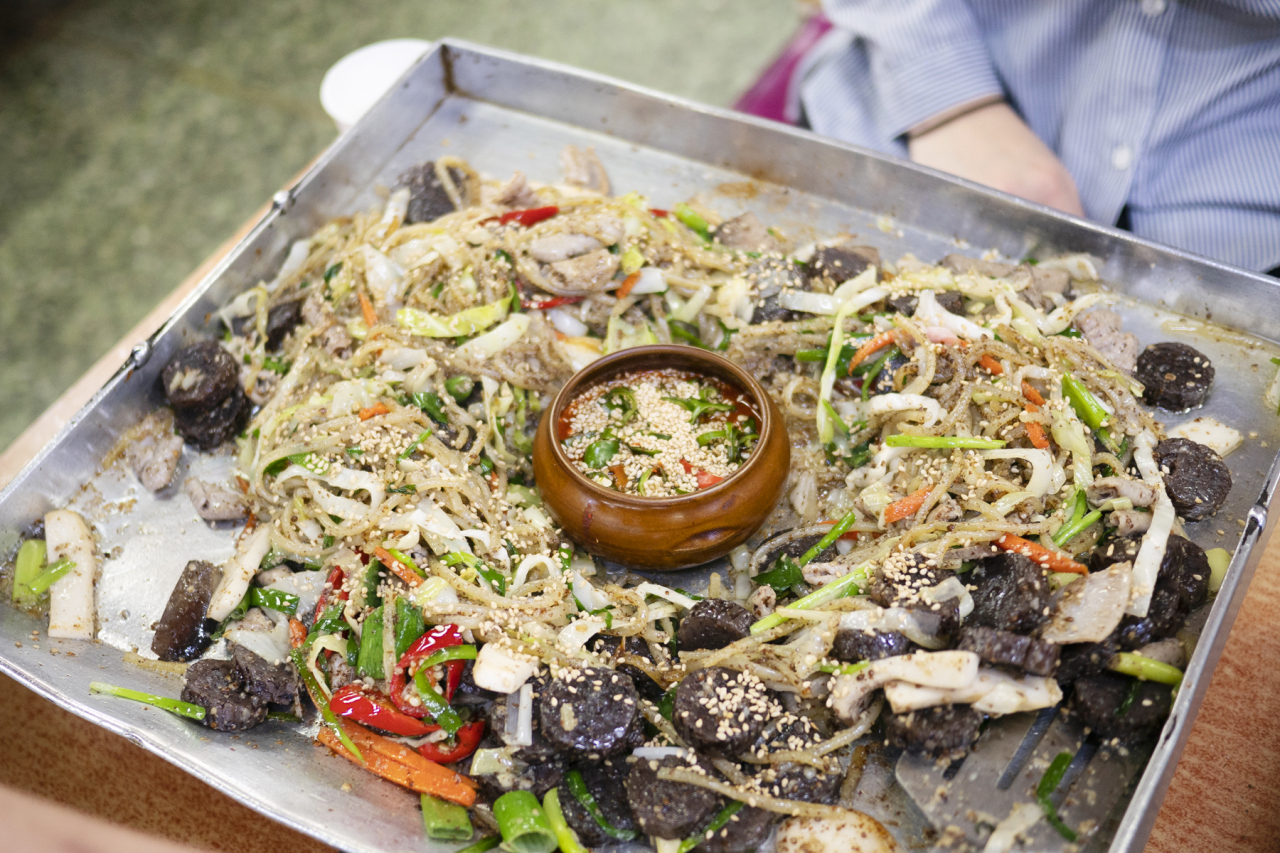 Sundaebokkeum, stir-fried blood sausage (Lee Sun-hye/The Korea Herald)
Though there are many ways of eating sundae, which can be simply steamed or added to soup, at sundae town, sundaebokkeum -- slices of sundae stir-fried with vegetables and cellophane noodles -- is a popular favorite.

Baeksundae, meaning white sundae, is the most popular version of sundaebokkeum here. Despite its name -- “baek” means white -- baeksundae is black, the same as ordinary sundae. The name refers to how the dish is cooked, without any red sauce. Stir-fried on a hot iron griddle, baeksundae is seasoned with sesame oil, perilla seeds and pepper.

For those looking for something spicier, one can ask for sundaebokkeum with gochujang, or red chili paste. The vendors will add the red sauce and some perilla leaves to the dish and stir-fry it once more.

Priced at around 15,000 won ($12.62) for two people, sundaebokkeum is a treat for many, drawing locals and tourists to the area.