The South Korean tech giant’s mobile business chief told The Korea Herald, “(The company) has reviewed the defect caused from substances (that entered the device), and we will reach a conclusion in a couple of days (on the launch).” 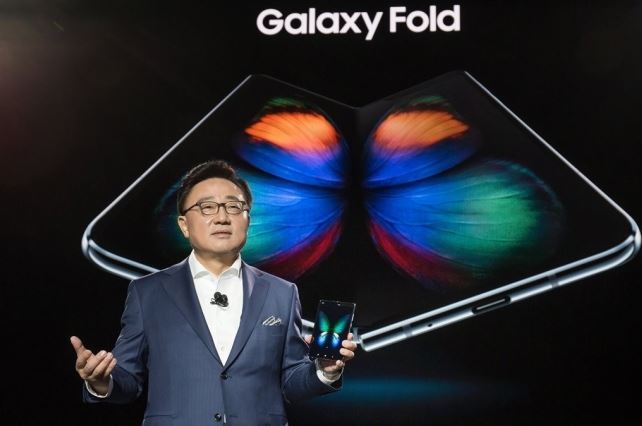 Samsung CEO Koh Dong-jin presents Galaxy Fold in February in San Francisco. (Yonhap)
Based on Koh’s comments, Samsung appears to be coming close to a final decision on the US launch, although the company has been working on rescheduling the US launch of the Galaxy Fold devices with enhanced display protection in a conservative manner, considering the time needed for necessary steps including radio certification and device testing procedures by US mobile carriers.

The company recently retrieved its foldable phone samples that it had given US technology journalists for review after many of them reported breaks, bulges and blinking screens after just a day’s use. The defects were apparently caused when substances entered inside the display through exposure caused by removing a protective layer.

The comments were the first by Samsung’s smartphone chief after the alleged display defects were reported by journalists before the previously planned launch on April 26.

In response to a question about the possibility of launching the foldable phone in the US within this month, Koh said, “We will not be too late,” hinting that the launch will be rescheduled to an earlier date than has been speculated.

Samsung has completed its internal inspection of samples that were damaged on some occasions -- when the top protective layer of the main display was removed or when substances were found on exposed areas at the top and bottom of the hinge -- and is currently in the process of taking measures to prevent similar problems.

The measures include strengthening the durability of the exposed areas on the hinge and minimizing the tiny gap between the protective layer and the bezel of the main display in order to prevent any external substances from penetrating the device, according to the company.