“The US is taking a comprehensive approach (to the talks) and looking for comprehensive dialogue,” Kang said at a meeting with the local media. Kang was responding to a question on which side – the North or the US – should alter its position to enable denuclearization talks to make progress. 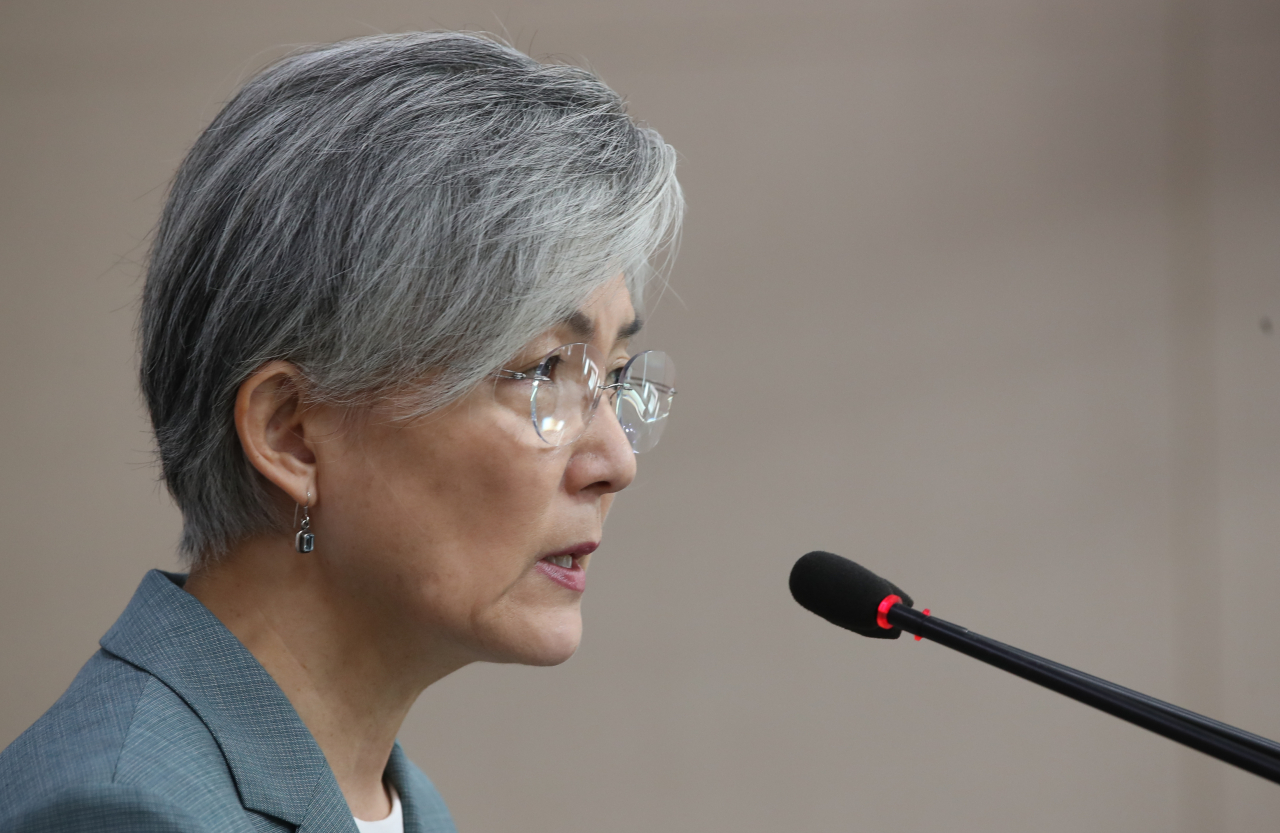 Minister of Foreign Affairs Kang Kyung-wha speaks during the press conference held in Seoul on Thursday. Yonhap
“I think that North Korea should take a wider scope, and approach the matter with a more comprehensive view.”

Kang’s statement hints at Seoul taking the position that North Korea should make concessions to resolve the deadlock with the US. The US favors a “big deal” in which sanctions remain until denuclearization is achieve, while Pyongyang calls for an action-for-action process.

“I think that the North is analyzing the situation since Hanoi, and various signals from the US with regards to its (future) actions,” Kang said referring to the second US-North Korea summit in Hanoi at the end of February. The second meeting between US President Donald Trump and North Korean leader Kim Jong-un was cut short without an agreement being reached.

“The key point is to make a ‘good deal’ that is mutually satisfactory to the North and the US.”

Regarding humanitarian aid to the North, Kang said the matter is unrelated to the current political situation, but an international consensus is needed.

At the meeting, Kang also said that diplomatic efforts for denuclearization and establishing peace on the peninsula continue despite the lull in US-North Korea negotiations, and hinted at Seoul taking a more active role in facilitating dialogue.

“Many measures are under consideration, including special envoys (to the North),” she said, adding that the US and North Korea appear to be using public messages to raise pressure on each other.

Regarding the possibility of revising six-party talks, Kang said that Pyongyang and Washington appear to be focused more on bilateral talks, but that a multilateral platform may be necessary in executing agreements the two countries reach.

The possibility of reviving six-party talks -- involving the two Koreas, the US, Russia, China and Japan -- was raised by Russian President Vladimir Putin following his summit with Kim last month.

Aside from North Korean issues, Kang said the Moon Jae-in administration has a “clear will” to improve relations with Japan.

South Korea’s Supreme Court has ruled in favor of Koreans who were forced into working for Japanese companies. South Korea has also decided to disband the foundation on comfort women, funded by the Japanese government, deeming the Seoul-Tokyo agreement on the matter reached during the Park Geun-hye administration to be unjust.

“The government has a clear will to improve Korea-Japan relations in a future-oriented manner,” she said.

“Dialogue between foreign affairs authorities of Korea and Japan will be continued to find the momentum for improving relations.”