Among major currencies, the South Korean won suffered the steepest monthly decline against the US dollar, reports showed Wednesday, due to the latest trend of a persistently strong greenback.

The won had fallen 2.82 percent on-month as of Tuesday, Bloomberg data that measured the monthly rate of decline of 16 major currencies showed.

Most currencies weakened against the US dollar, except the Mexican peso and South Africa’s rand, which gained 1.98 percent and 1.07 percent, respectively. 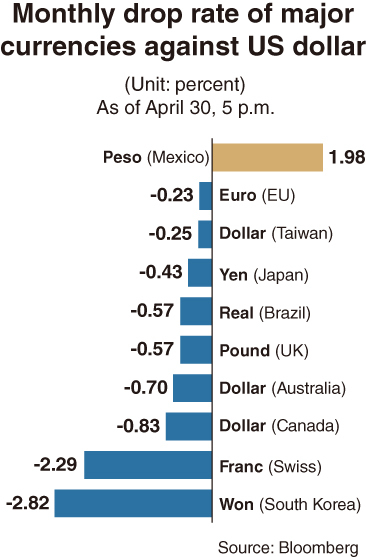 The Swiss franc closely followed the won with a 2.29 percent rate of decline, while the Swedish krona and New Zealand dollar were also included in the 2 percent drop range.

The Canadian and Australian dollar fell 0.83 percent and 0.7 percent, respectively.

The Japanese yen and British pound dropped 0.43 percent and 0.57 percent, respectively, despite their reputations as relatively risk-free assets. The euro fell 0.23 percent amid concerns surrounding bleak forecasts on the EU economy.

The trend of a strong US dollar comes on the back of reports pointing to robust growth in the world’s largest economy, while the rest of the world have been dealing with lesser-than-expected reports on economic growth.

According to the US Bureau of Economic Analysis, its first-quarter gross domestic product expanded by 3.2 percent, posting its best growth to begin the year in nearly four years.

Meanwhile, the Bank of Korea recently said Korea’s gross domestic product had backtracked an estimated 0.3 percent in the first three months of the year from the previous quarter -- its worst performance in almost a decade. The announcement comes after the Finance Ministry set the growth outlook for the nation’s economy between 2.6 percent and 2.7 percent this year.

The local currency closed at 1,168.2 won against the greenback Friday, marking its lowest level since January 2017. The figure was down 9.7 won from the previous close.

The signs of a weakening won became more visible after the US dollar index hit a 22-month high on April 23, at an intraday level at 97.78.