[ The Korea Herald – Send E-mail ]
[Seoul Food Alley] Discovering Gongdeok Market’s ‘food alleys’
By Im Eun-byel
Published : May 2, 2019 - 14:24
Updated : May 2, 2019 - 14:32
Seoul’s alleys are filled with eateries that specialize in particular dishes. The Korea Herald takes you on a foodie trip to narrow alleys where decades-old establishments beckon diners with their secret recipes, often handed down through generations. -- Ed.

Gongdeok-dong, situated in western Seoul, is a neighborhood where diverse groups mix -- office workers, residents and foreign tourists too.

It also is home to the nearly century-old Gongdeok Market, where a wide variety of products from groceries to kitchenware can be found.

From the outside, the cluster of old, worn buildings may not appear to be open for business. But once you step inside, a whole new world opens up, revealing a cobweb of stores in full operation. And as in almost all markets, there are eateries.

This market is home to Jokbal Alley, a cluster of eateries serving jokbal, or sliced pig trotters with caramelized soy sauce. 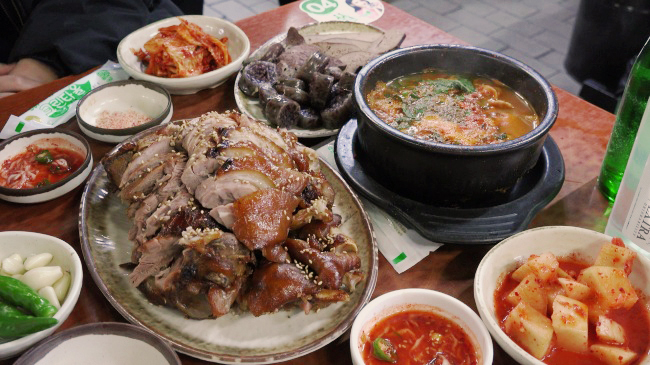 Jokbal is served at a restaurant along Gongdeok Market’s Jokbal Alley in Gongdeok-dong, western Seoul. (Lee So-jung / The Korea Herald)
Though Jangchung-dong has been Seoul’s best-known jokbal district for decades, crowds have shifted westward in recent years for the cheaper prices found here. The price difference may not be large, often between 3,000 and 8,000 won, but one thing is for sure -- you will be much more satisfied with the portion sizes in Gongdeok-dong.

In Gongdeok Jokbal Alley, pig trotters are served with complimentary steamed blood sausages and pork broth. Though served as extras, they are fine foods in their own right.

The alley was formed around 30 years ago. One jokbal restaurant became a huge success and others opened up nearby, hopping on the bandwagon. The restaurants have now formed a small alley.

If jokbal is not filling enough, Gongdeok Market also houses Jeon Alley, where eateries serving jeon -- Korean pancakes -- are lined up on either side. 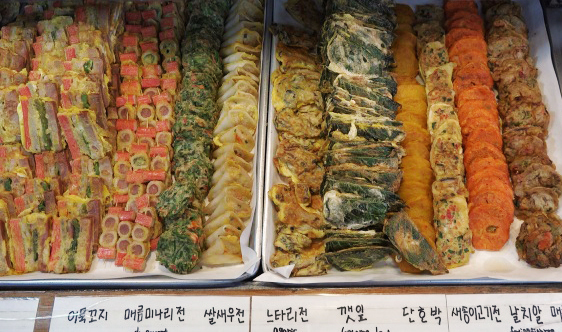 What makes Jeon Alley unique is that the eateries here have embraced innovation: Apart from traditional jeon, they cook up all sorts of novel pan-fried foods using ingredients not found in the traditional kind such as cream, pork and crab. Also, they serve a wide selection of deep-fried snacks.

Diners can grab a basket and pick what they like. The restaurateurs will fry the food one more time so it can be enjoyed piping hot. Order Gongdeok makgeolli, a traditional rice wine specially produced for sale in the area, and pair it with different varieties of jeon.