It is the 22nd meeting of ASEAN+3 finance and central bank chiefs and will take place Thursday in the Fijian city of Nadi.

The same day, the finance and central bank heads of China, Japan and Korea will convene a separate meeting, the 19th to date, to discuss trilateral economic cooperation. 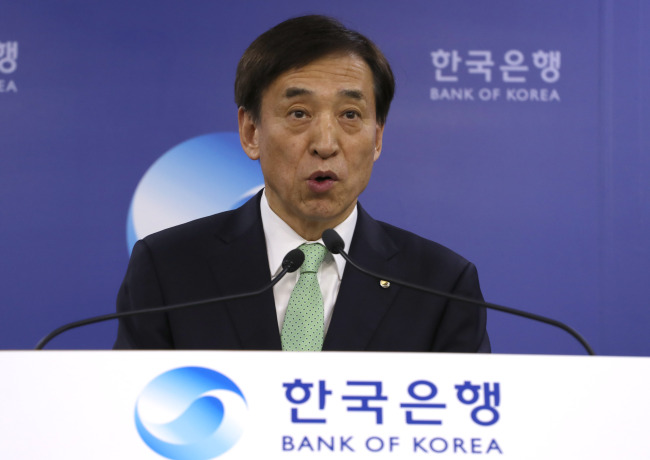 Bank of Korea Gov. Lee Ju-yeol (Yonhap)
The high-level ASEAN+3 meeting will focus on improving the effectiveness of the Chiang Mai Initiative Multilateralization, a multilateral currency swap arrangement among the 13 countries.

The CMIM, which took effect in 2010, was designed to address balance of payment and short-term liquidity difficulties in the region and to supplement existing international financial arrangements between members of the ASEAN+3.

At this week’s meeting, the members will vote on an amended version of the CMIM that would strengthen related financing measures, the BOK said.

Participants in the meeting will also discuss ways to strengthen the organizational capabilities of the ASEAN+3 Macroeconomic Research Institute. The body was founded to take charge of economic surveillance for the region, support the implementation of regional financing arrangements and provide technical assistance to members.

Another major issue on the table is moving forward the Asia Bond Market Initiative. Launched in 2002, the ABMI aims to develop efficient and liquid bond markets in Asia to enable better utilization of Asian savings for investments in the region.

Another goal of the initiative is to mitigate currency and maturity mismatches in financing, marking a key step forward in ASEAN+3 finance cooperation, according to the ASEAN.

BOK Gov. Lee is slated to return to Korea on Friday.