[ The Korea Herald – Send E-mail ]
LG’s AI features become more practical for 5G phone
V50 ThinQ 5G to automatically remind users where they parked, when to get off subway
By Song Su-hyun
Published : Apr 9, 2019 - 15:23
Updated : Apr 9, 2019 - 15:23
LG Electronics’ first 5G smartphone, the V50 ThinQ 5G, will feature highly customized artificial intelligence functions that would make users feel as if the smartphone is a real personal assistant, according to the company on Tuesday.

Ahead of the 5G model’s launch next Friday, LG revealed functions of the new device that focus on increasing user convenience by reinforcing the AI platform to understand circumstances.

For example, the V50 ThinQ will help users with parking. When a user parks and gets out of the car, the smartphone will recognize the situation and remind the user to take a picture of the parking location. 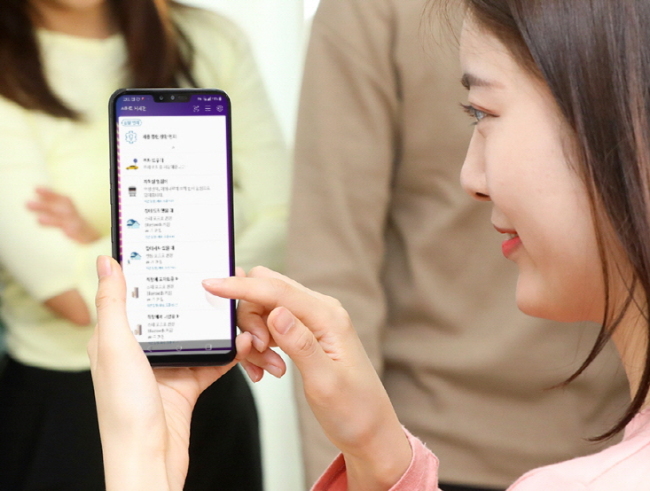 A user test-runs the LG V50 ThinQ 5G smartphone. (LG Electronics)
When commuting by subway, the phone alarm goes off as the train approaches the destination, preventing users from missing their stops.

The company said, “In the era of 5G where users send and receive far greater amounts of data, LG’s 5G phone has the feature of helping provide users with more accurate information at a faster rate in a secure manner.”