Stereotypes play a role in perceptions of a foreign country and its people -- especially when it comes to Korea and Japan, which have a relationship strained by history and politics.

Yet artist Jung Yeon-doo succeeds in approaching the subject matter from the perspective of a dispassionate observer in “Classic and New,” a 43-minute video work that highlights the narratives of ordinary Japanese people.

Jung’s work revolves around the Kiyosumi-Shirakawa area in Tokyo as well as people living in the region. 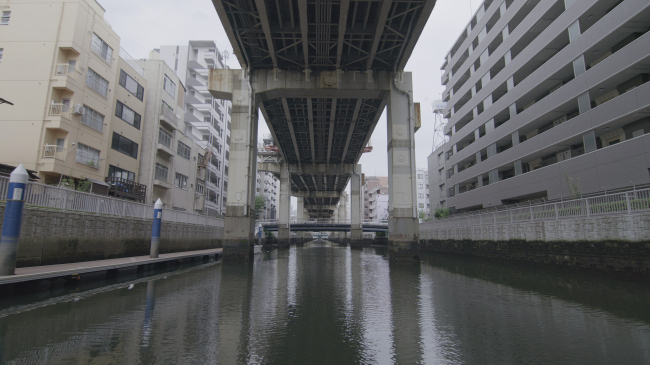 A scene from artist Jung Yeon-doo’s “Classic and New” (2018) (Perigee Gallery)
Using three screens, Jung shows three separate narratives: wartime memories told by a longtime resident of the town, who was 10 years old at the time; a project the artist conducted at the local town with elementary students; and a performance by a local rakugo master -- a lone storyteller in Japan’s traditional sit-down comedy genre. 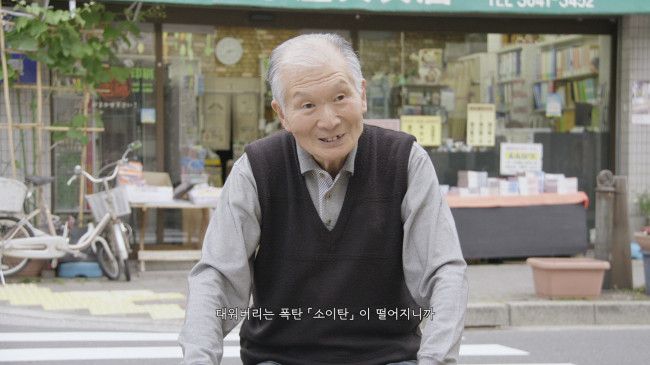 The wartime experience of the old resident was perhaps the most sensitive in terms of its subject matter.

“The curator from the Museum of Contemporary Art Tokyo, who asked me to work on this project, might have borne a risk bringing me in to talk about the history of the Japanese town and its residents. Letting a Korean artist deal with a story told by a Japanese wartime survivor would have been burdensome to the curator,” Jung said.

“I had to be careful in dealing with the story as there exist many historical and political layers between the two nations.”

Therefore, Jung assumed the role of an observer and tried to put his feelings aside.

“I think it is dangerous to pose an empathetic attitude toward a foreign nation or someone who is living in the area,” Jung said. “What I tried here was to step aside and let the local residents tell their own stories, instead of me delivering a story that I have created.” 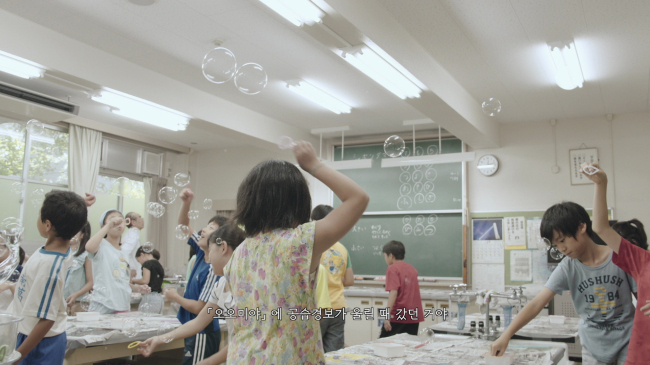 “Mr. Jung’s platform was not a place for an artist to bring a creation of his own, but a place where characters themselves voluntarily take the lead. The artist’s role here is mainly to create an environment that can nurture that voluntariness. Jung surrenders his authority to the people in his works,” said Shin Seung-oh, director of Perigee Gallery.

By stepping aside, the artist tried to minimize intervening with his work.

“My job is to create a perspective in which the audience can see things without any stereotypes,” Jung said.

“Classic and New” is in line with Jung’s previous documentary-based works in which he made careful observations of ordinary lives, including “A Girl in Tall Shoes” (2018) and “D‘Ici et d’Ailleurs” (2015).

Through such works, Jung said he wanted to highlight stories that show different aspects of lives, or different types of lives with which viewers may not be familiar.

In his 2015 work “D‘Ici et d’Ailleurs,” for instance, Jung tried to shed light on the lives of immigrants in France.

With “A Girl in Tall Shoes,” Jung tried to show the contrast between old and new Hong Kong by marrying two narratives of the city’s residents. He placed the oral narrative of a former female textile factory worker, born in 1958, on one screen and that of 23-year-old women on another.

By juxtaposing the seemingly separate narratives, Jung made the lives of Hong Kong residents and the city’s history accessible to viewers.

Though the three narratives are not directly related, they each resonate with one another through the use of thematic and cinematographic devices. 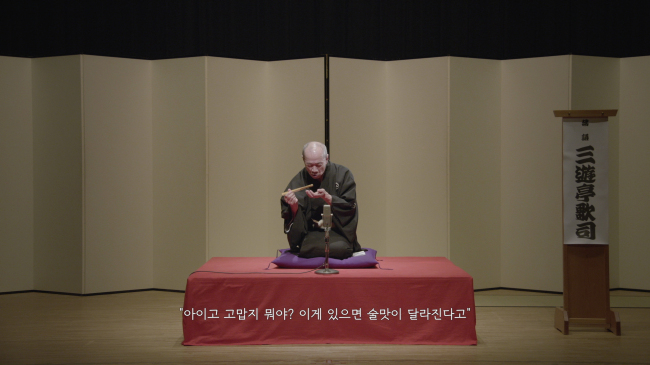 In addition, stories by the local rakugo master work as a kind of buffer between the two stories.

The rakugo master’s stories, mainly about family relationships and stories that children can listen to, offer an emotional link that bridges the seemingly distant narratives of wartime memories and innocent stories told by children living in peaceful times.

“I wanted to talk about qualities that are universal and common through small and trivial stories, like values related to family,” Jung said.

The wartime stories have the potential to stir up Korean viewers. But watching Jung’s work, in which he laboriously listens to the locals, one cannot help but sympathize with the stories’ appeal to the universal values that everyone can relate to.

This work, commissioned by the Museum of Contemporary Art Tokyo, is currently on view at the MOT and Perigee Gallery, located near the Seoul Arts Center in Seocho-gu, Seoul.

The shows run through June 16 and May 11, respectively.