What is lesser known is how New had studied in the US even before the Japanese colonial rule of Korea to learn the “Western ways,” or how he went to high school on an American football scholarship, or had a multicultural family with US-educated Chinese doctor Ho Mi-ri, and last but not least that he bequeathed all his worldly possessions for the welfare of Koreans.

After a cosmopolitan and patriotic childhood New joined the independence movement and then became a successful businessman. He later founded the company that would become the backbone of Korea’s pharma industry. Continuing on with his philanthropy, New carved out many landmarks here until his passing in 1971. 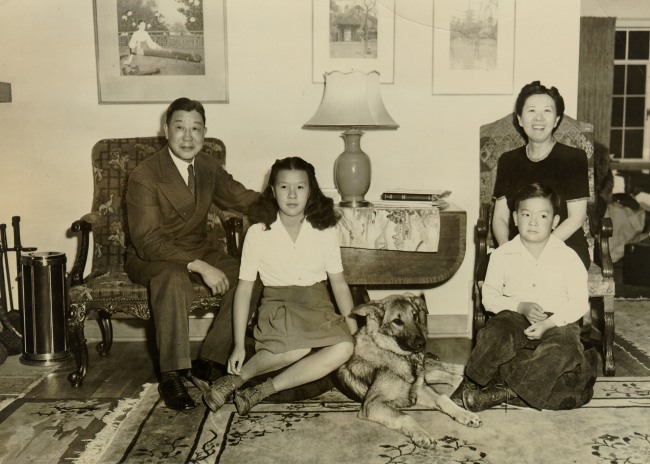 Ilhan New and his family (Yuhan Corporation)
Yuhan, now led by CEO Lee Jung-hee, surpassed $200 million in exports in 2017, and became Korea’s top pharma firm in terms of sales in 2018.

Born in 1895 in Pyongyang -- now the capital of North Korea -- New’s life was filled with change, even by modern standards.

During his childhood, Christianity was rapidly spreading in Korea. New’s father, who was a skilled agro-fishery wholesaler married to the daughter of an affluent Christian family, took a missionary’s advice to send his first-born son and eldest of his nine children to the US for education. As fathers often do, he hoped he would grow up to become a bigger man than himself.

In 1904, New left for the US at the age of nine. His given name Ilhyeong New was modified to Ilhan New to reflect the name of Korea, which in the Korean language is “Han-guk.”

Intended or not, New’s name stands out even to this day, as the three characters “Yu-il-han” literally reads as “unique,” or “the only” in Korean. 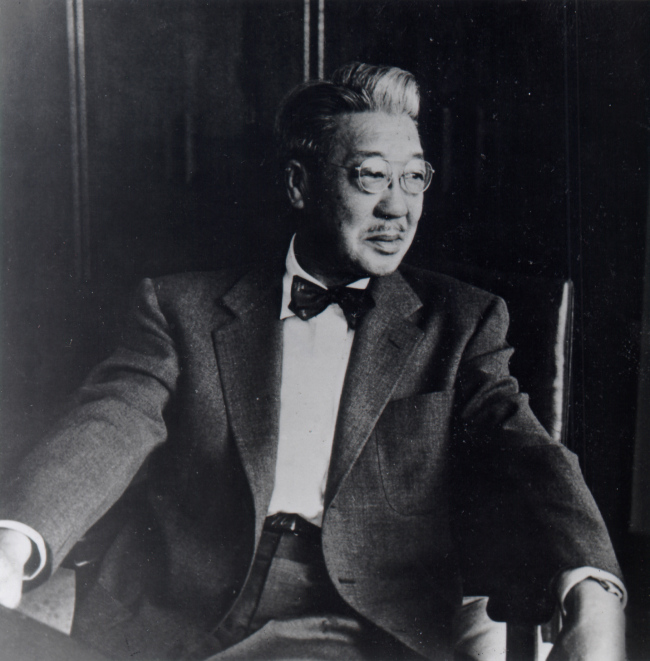 Ilhan New with his daughter, Jae-ra New (Yuhan Corporation)
By the time he returned to Korea, 22 years had passed, and he was married to a Cornell-educated Chinese physician he met in the US. His Korean was rusty, and his thought process, according to written accounts of those who knew him, had completely changed from that of his other countrymen in the Joseon era.

While New was in the US, a series of diplomatic events had quickly unfolded. The Joseon administration signed the “Eulsa Treaty” of 1905 that passed diplomatic power to Japan. In 1907, Chosun’s last Emperor Gojong abdicated and in 1910, the nation went under Japanese colonial rule.

Korean expatriates in the US did not sit still. New was 18 when the Korean National Association to which he belonged earned the US government’s recognition in 1913 for the Koreans in the US to be independent of the Japanese diplomatic body there, on grounds that they had arrived prior to the Japanese occupation of Korea.

Nostalgic and concerned for his family, and surrounded by like-minded young independence fighters, patriotism defined New. While attending the University of Michigan, New was actively involved in the Korean students’ open speeches seeking Korea’s liberation.

All the while, his career rolled on. He was first an accountant at General Electrics, then a successful businessman in the market for Asian food in the US.

In 1922, New co-founded La Choy Food Products, dealing in canned mung bean sprouts, which later became a major American-Chinese food ingredient manufacturer and distributor. He married Ho in 1925 and returned to Korea with her to reunite with his family. In broken Korean, New filled for his father in the sprawling business he had in the US. By then, New had already been featured in Korean newspapers as a man who made a fortune in America with bean sprouts.

“A patriot’s highest calling is to do what he must for the sake of his nation,” goes New’s quote, still celebrated by Yuhan.

Once he returned to Korea, New was compelled to stay. Seeing his country placed in a dire situation -- the lack of education, health care and business -- New decided to withdraw from La Choy and start a Jack-of-all-trades company supplying what was needed for the Korean people, centering on pharma production and imports.

“No nation can be stronger than the health of its citizens,” New is quoted as saying. As severance pay from La Choy, he had received approximately $250,000 from co-founder and university classmate Wallace Smith. In 1926, New founded Yuhan.

Yuhan’s symbol and logo, the willow tree, originates from a drawing gifted to New from a fellow US-based independence fighter and journalist Soh Jai-pil. Soh had noted that the Chinese character for his friend’s last name New -- also romanized “Ryu” or “Yu” -- meant willow. The symbol continues to this day.

Upon founding Yuhan, New used the willow drawing as the visual representation of his company. From then on, his business was always a competition between the willow and the sakura, or, Japan.

Together with his wife, who by then had attained a medical practitioner’s certificate in Korea and was deeply involved in local public health care, New brought in overseas and domestic pharma experts at Yuhan. He also imported from major US pharma companies such as Abbott, Bristol-Myers Squibb, and Parke-Davis.

Yuhan quickly rose in the public perception as a reliable company that genuinely cared for people’s welfare. That a drug should be prescribed by a physician who knows a patient’s medical condition, was a fresh thought in Korea at the time. Fake drugs and potions with exaggerated or made-up medicinal effects were rampant in the market. Yuhan’s advertisements always recommended customers to consult a doctor before taking medication.

The Pacific War in 1941 and the Korean War in 1950 ravaged Yuhan’s overseas and domestic businesses but the company survived.

It became a limited liability corporation in June 1936, following New’s wish that Yuhan be publicly owned. In 1962, it was the first pharma company to be listed in Korea.

New was the first business owner in Korea to separate corporate ownership from business management. “There must be distinct separation and protection from nepotism in an organization’s management. Family influence guarantees neither an enterprise’s growth, nor its sustainability,” New had said.

In 1937, Yuhan adopted a stock-sharing plan for employees, the first such case in Korea. In 1998 and 2002, the company gave stock options to its regular employees, becoming the first listed company in Korea to do so.

When New passed away at age 76 in 1971, his will revealed that his shares of Yuhan, worth 225 million won at the time, were left to nonprofit organization Yuhan Foundation for social welfare and education. For his family, his daughter and son, New left only a small portion of his wealth enough to cover the remainder of his granddaughter’s college education.

“Some pass through this world leaving wealth and fame, but the greatest legacy is contribution to the world which helps us survive,” New had said.

New’s first-born daughter New Jae-ra, who stayed by her father’s side through his ailing years, looked after the goodwill foundation following her father’s words. She, too, gave her entire savings of 20 billion won to the Yuhan Foundation after she passed away 1991 at age 63. New’s son Il-sun, 84, currently lives in the US. He briefly served as a vice-CEO at Yuhan-Kimberly, a lifestyle products company founded in 1970.

As for his literary footprints, New wrote a book and article. He peened a 190-page English memoir recounting his childhood in Korea for the international audience, and another scholarly article titled “Do Business with Korea.” The memoir captures the traditional customs of Koreans in the 1890s.

The only mention of a substance of therapeutic value appears on page 119, where New describes the medicinal qualities of ginseng. Pearl S. Buck, author of “The Good Earth” and a Nobel literature laureate, was New’s friend and featured a character named Kim Il-han in one of the many works she produced. 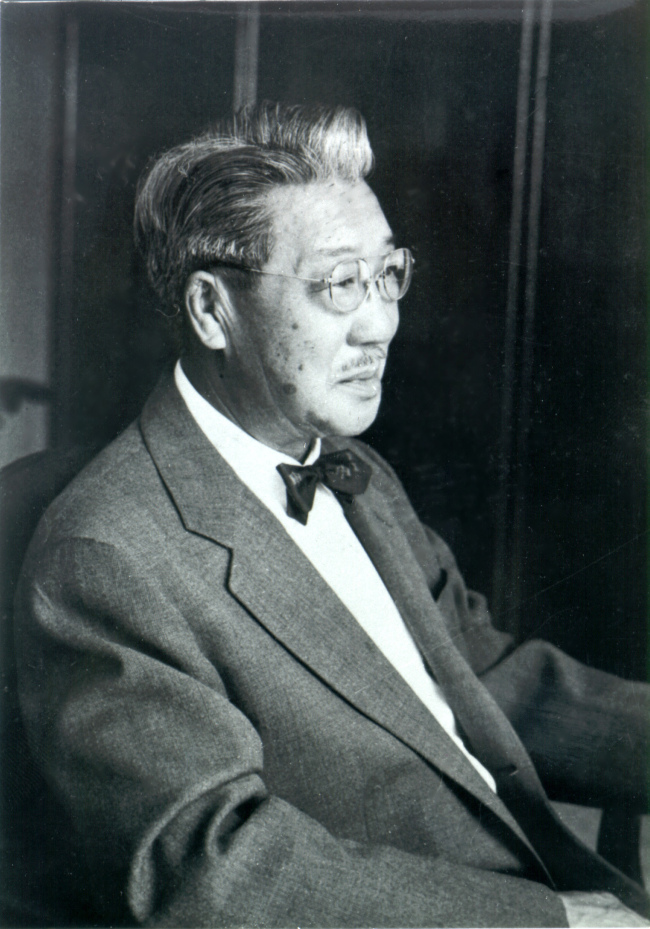 As one of Korea’s oldest pharma firms, Yuhan sells 84 drugs and 49 over-the-counter products, as well as various kinds of household products. It has international partners in over 30 countries.

Giving back to society remains a core corporate value of Yuhan. Standing by the vision of its founder, who established Yuhan Educational Foundation and Yuhan Foundation, the company has been engaged in various corporate social responsibility programs.

The two foundations are Yuhan’s biggest stakeholders, meaning Yuhan’s corporate profits naturally find their way to the nonprofit bodies as dividends to be given back to society. This structure, in which a firm’s flourishing leads to increased social boon, is credited as Korea’s first CSR model.

For 49 years since the Yuhan Foundation’s establishment in 1970, the company has given scholarships to some 4,600 high school and college students, amounting to approximately 15 billion won.

Yuhan’s latest innovative project is the brand “New Origin,” which is a health supplement pill brand that also runs organic eateries. There are currently nine New Origin cafes in Seoul, where visitors can have healthy salad and drinks along with a complementary vitamin pill or probiotics capsule. 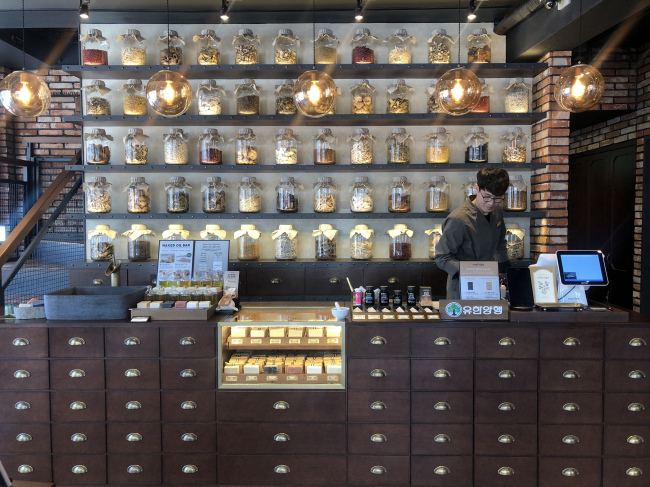 The company is also seeking to reestablish itself as a research and development pharma firm. In November 2018, Yuhan licensed out novel lung cancer treatment lazertinib to US’ Janssen Biotech in a deal potentially worth $1.25 billion with a $50 million upfront payment.