Fire trucks from different regions of South Korea are being deployed to Gangwon Province following a series of mountain fires that struck the area, authorities said Thursday.

The National Fire Agency said it has ordered all headquarters of major regions, including Seoul, Gyeonggi Province and North Chungcheong Province, to send fire trucks to the border town of Goseong, around 210 kilometers northeast of Seoul. 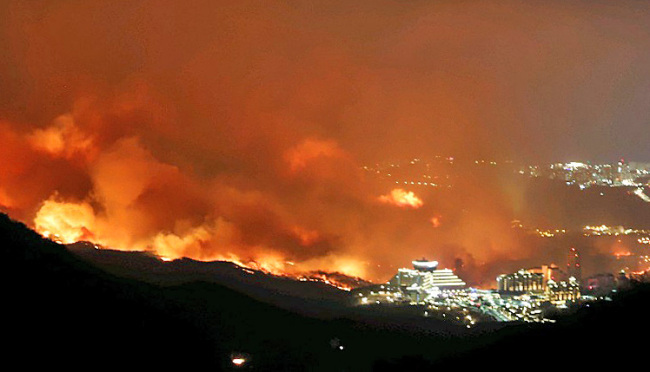 Fire strikes the northeastern border town of Goseong on Thursday. (Yonhap)
According to the Gangwon Fire Headquarters, fire broke out on a roadside in Goseong at around 7:17 p.m. and spread to a nearby mountain, leading to the evacuation of residents and guests of a nearby condominium.

The fire agency said it has issued the highest level alert -- level three -- as of 9:44 p.m. The first level indicates a fire is only affecting a limited area, while the second step is issued for a fire covering more than one city or province.

The top level is issued for accidents affecting the entire nation, reflecting the seriousness of the situation.

"It is extremely rare for fire trucks to be dispatched on a nationwide scale," an official from the agency said.

Firefighters struggled to extinguish the fire in the early stages, but the authority said they failed to do so due to the strong wind.

The authority initially sent 23 fire trucks and 78 personnel under the stage-two alert. As of 8:31, 40 fire trucks from other areas were ordered to join the extinguish effort, with more support expected to arrive from across the country.

With the fire also affecting nearby areas, some of residents in Sokcho, south of Goseong, were also asked to evacuate.

Firefighters said they are still making efforts to put out the fire. 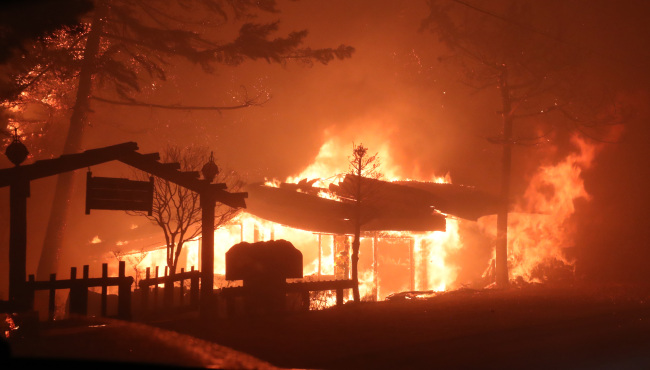 A restaurant is engulfed by fire in the northeastern border town of Goseong on Thursday. (Yonhap)

Gangwon Province is struggling to fight another fire in the mountainous county of Inje, 165 km northeast of Seoul, which broke out at around 2:45 p.m.

As of 7:00 p.m., firefighters said they were only able to extinguish roughly 10 percent of the area.

Firefighting efforts are being delayed by the pullout of helicopters after sunset, the authority said, with strong wind also making the mission more complicated.

No casualties from the fire were immediately reported. (Yonhap)