What he found instead were traces of a man who had fought to keep the Korean identity alive among descendants of those forced to leave the country nearly a century ago -- Jeronimo Lim.

“The first person I met at the Havana Airport was someone who was supposed to pick me up, this Korean lady who didn’t look anything like Cuban. ... She happened to be the daughter of Jeronimo,” Juhn said, on the serendipity that had sent him down an unexpected path. 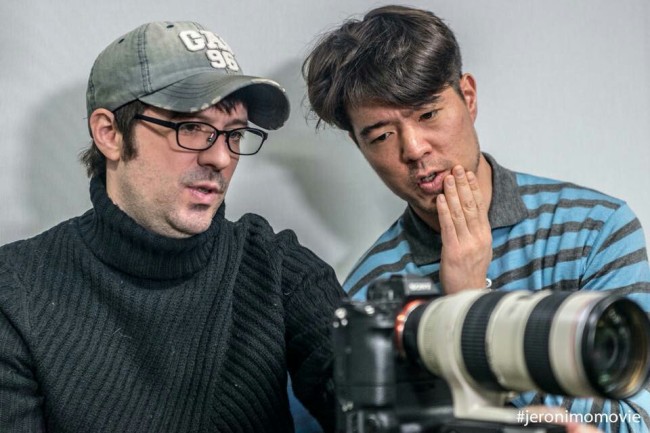 Joseph Juhn (right) during the production of “Jeronimo”
The story of Koreans in Cuba, many of whom left when the Korean Peninsula was under Japanese colonial rule, is a harrowing one. A thousand-odd Koreans were sent to Mexico as extremely low-paid workers -- “slaves” as some describe it -- under false promises.

Among those who fled their hometowns in hopes of finding a better life was Lim Cheon-taek, Jeronimo’s father.

Juhn’s upcoming documentary film “Jeronimo” looks at the life of a man who struggled against discrimination and rose to become an important figure in the Cuban government. He devoted the latter part of his life to keeping the Korean spirit alive among his compatriots in the Latin American country.

Juhn is searching for a distributor. Two firms are close to a deal, and even movie star Jung Woo-sung has shown keen interest in the project and expressed his support, according to Juhn.


“I was always interested in filmmaking, especially documentaries. And also in the Korean diaspora, how Koreans across the world form their own sense of identity away from the homeland,” Juhn said. “What truly drove me was this desire to uncover this unsung hero. I feel like I’ve discovered a figure from a history book.”

After his encounter with Jeronimo’s family, Juhn set out to make a documentary about the unsung hero. He interviewed around 70 people either related to the man or who had knowledge about him for the 93-minute film.

The documentary covers how the third-generation Korean-Cuban had joined revolutionary forces against the Batiste regime; how he was given a role in the Ministry of Industry under the revered Che Guevara; and visited South and North Korea as a government official.

But his most important role came later in his life, as he began his transition from an official of the communist government to work for the good of his people.

“During (the economic crisis in Cuba), it really occurred to him that they’re on the wrong track. ... The shift (of Jeronimo) is interesting because after that, he focused all his energy on reconstructing the Korean identity and community in Cuba.

The ability to admit that he may have had a wrong idea so late in his life attests to Jeronimo’s strengths, Juhn pointed out.

Jeronimo’s efforts to preserve the Korean identity until his death in 2006 included collecting information on living Korean descendants; teaching Korean to the younger generation; and forming the Korean-Cuban Association as well as Korean Cultural Museum. 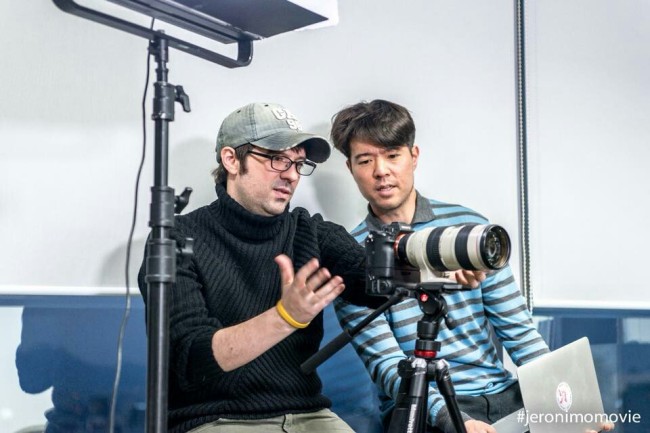 Joseph Juhn (right) during the production of “Jeronimo”


Korean-Cubans have struggled to keep Jeronimo’s legacy alive, but alienation from their homeland has not helped.

As someone of Korean descent living elsewhere, Juhn noted that there seems to be a tendency among Koreans to perceive ethnic Koreans living in other countries as different. “The very notion of limiting the definition of Korea is self-destructive. Because Koreans tend to be more exclusive then inclusive,” he said.

Perhaps an ideal model for the Korean diaspora could be that of the Jewish people, who exercise immense influence around the world.

“There is an underlying understanding and acknowledgement (among Jews) that they have to co-exist and fully acknowledge the presence of each other. Because without one, there can’t be another,” Juhn said.

“There are 8 million Koreans living outside the country -- that’s the population of Busan, Daejeon, Daegu combined. Imagine how much of an asset 8 million people can be for Korea,” he said.

But what could be the next step?

“I think Jeronimo can resolve that. He is an example of someone who was 100 percent Cuban, but at the same time was 100 percent Korean. I think that’s the role model for any overseas Korean to emulate,” he said.


Tracing Koreans’ search for identity, Juhn found that Jeronimo had an unexpected ally in the form of seven singers from his homeland.

“Some people in Cuba say that what Jeronimo has tried to do in 11 years, BTS did it overnight,” Juhn said.

He went on to explain that the worldwide popularity of the K-pop sensation has sparked younger-generation Korean-Cubans’ interest in discovering their roots. He highlighted the example of a fourth-generation Korean girl who had not been aware of her heritage until the age of 16. She had developed an interest in the culture through her interest in Korea’s pop culture.

“When older people tell you to honor and respect your roots, it doesn’t really register among the young generation. But in the case of pop culture, there’s a strong automatic desire to know more. First that culture, but something more subtle and deep later on,” he said. “I think Jeronimo would be happy.”

Indeed, upon learning about the impact of K-pop and K-dramas on what could be described as the “BTS generation,” Juhn came to have renewed respect for K-pop.


The director challenged Koreans to ponder the meaning of the Korean identity.

“The sense of Korean identity for overseas Koreans is something more instinctive, because it can be described as having a certain tie to the motherland, in terms of how much I feel Korean.

“But for Koreans living here, I don’t really know how far they’re going to trace back in history to find the defining moment for such identity,” he said. “It’s a dialogue worth having.”

While Juhn has no plans to make more films for now, he said he intends to further pursue what he believes is his mission to raise awareness of the Korean diaspora.

“The Korean diaspora, highlighting them and building bridges between Koreans of motherland and those who live overseas is my life mission. So while I have no idea what my next step will be, I’m sure I’ll be doing something in line with that vision,” he said.