Character building, building up of tension, attention to detail and other qualities that made Kim Yoon-seok one of the best actors in Korea are also what make him a good director.

Kim has created some of the most memorable characters in Korean cinema through understanding his characters. In “Tazza: The High Rollers,” the most talked-about character was Kim’s Agwi, despite his appearing in just five scenes, and the actor depicted a cold-blooded menace who believes he is doing right in “1987: When the Day Comes.”

His thorough understanding of his characters -- the motivation and the background behind their actions -- helps the characters appear more convincing and rooted in reality, even the most flamboyant ones.

Kim’s directorial debut in “Another Child“ is a well-paced drama with complicated yet relatable characters, a superb performance by the cast, heart and a “natural” feel to it that make it not only enjoyable, but thought-provoking as well. 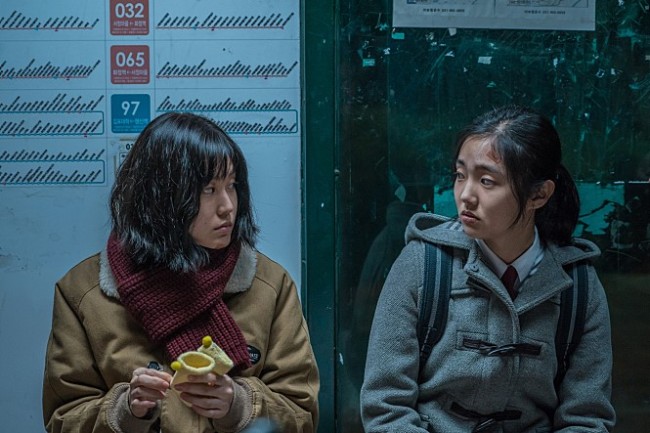 The movie starts with 17-year-old Ju-ri (Kim Hye-jun) seeing her father Kwon Dae-won (Kim) engaging in an affair with restaurant owner Kim Mi-hee (Kim So-jin), who is pregnant with his child. Running into Mi-hee’s daughter Yoon-ah (Park Se-jin), a schoolmate, she turns around and flees.

When the two girls meet at school, Yoon-ah snatches the phone from Ju-ri, who is talking to her mother Yeong-ju (Yum Jung-ah) to tell her of the affair. The four embark on a complicated journey of love, hate, jealousy, disdain and betrayal.

As young as they are, it is amazing how Kim Hye-jun and Park Se-jin capture their characters, embodied in the struggle they are going through. The chemistry is incredibly good and believable, as every interaction between the two has solid motive and reasoning.

Then again, all four actors worked very well with one another.

While the two young actors stood out, it was the adult actors who really held the film together. The character of Dae-won could have easily been a generic slimy bastard, but Kim’s performance injects heart and relatable aspects into a married man in an affair.

The performances by Kim So-jin and Yum are just as strong, if not stronger. Yum’s performance as the only real adult struggling to maintain her and her daughter‘s sanity and dignity while in unimaginable pain herself was outstanding, as was Kim’s depiction of a middle-aged women who never got the opportunity to mature into an adult.

All four actors perform spectacularly to create four very interesting and distinct characters. Even Yoon-ah’s all but estranged father, played by Lee Hee-jun, leaves a lasting impression in just one scene.

This is where the director’s ingenuity stands out. Kim, along with fellow excellent actor Song Kang-ho, is known for creating characters who feel very natural -- like actual human beings. Another method actor, Choi Min-sik is equally great, but he tends to be more expressive, almost flamboyant: like the difference between Robert De Niro and Al Pacino.

As a director, Kim manages to integrate that natural character-building into the film, slowly sucking in the audience. “Show, not tell” is an art that so many directors and actors today lack, but one both the cast and the director perform beautifully in “Another Child.”

In creating a world that feels natural, the director’s keen eye for detail stands out, from the reactions by supporting actors to how the two people in the affair have saved each other’s contact information on their phones. It shows the two are not in the same place in the relationship, while hinting at Mi-hee’s immaturity.

While the ending in which the two protagonists take “peculiar” actions have stirred controversy in early reviews, change in the initially reserved and well-mannered Ju-ri reflects her growth. Sometimes people do things that look crazy, but that make sense to those who can relate to what they are going through. It also shows how much impact Yoon-ah has had on her, and vice versa.

The final scene makes it clear these two girls are not the same ones who embarked on the strange journey from the opening scene.

It could be argued the film does not have the strongest story, or that the message feels generic and it falls short of being cathartic.

It is a coming-of-age story that makes the audience ponder the meaning of growing up, and what it means to be an adult.

“Another Child” opens in theaters on April 11.