She decided to terminate the unwanted pregnancy, even though it meant she would have to live as a criminal.

Going through an abortion was painful enough, but the stigma was worse, she said. 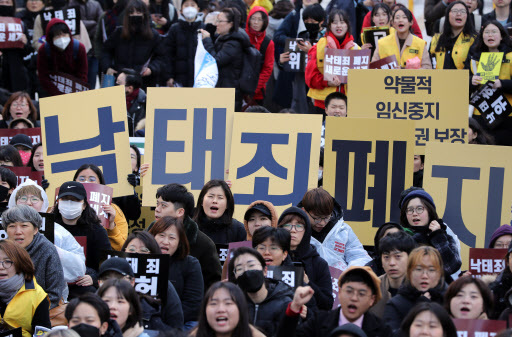 A group of women’s rights organizations hold a rally demanding the abolition of the abortion ban in central Seoul on Saturday. (Yonhap)
“I didn’t know what to do. I didn’t know what to say to those around me,” said Hong, who had the procedure three years ago. “I felt completely isolated from society. I thought it was my fault, because my birth control failed.”

“At the same time, I was angry because my ex-boyfriend could run away from it when I was left alone with the burden of dealing with the aftermath of the abortion,” she said.

Abortion in South Korea is illegal. Women who terminate their pregnancies and doctors who help them risk criminal prosecution.

With the Constitutional Court expected to rule in April on whether to uphold the abortion ban, debate on whether a woman’s right to choose should come before a fetus’s right to life has resurfaced in Korea.

On Saturday, women’s rights activists took to the streets in central Seoul calling for the decriminalization of abortion, saying this step is necessary to protect women’s health and reproductive rights. Nearby, anti-abortion protesters also staged a rally. 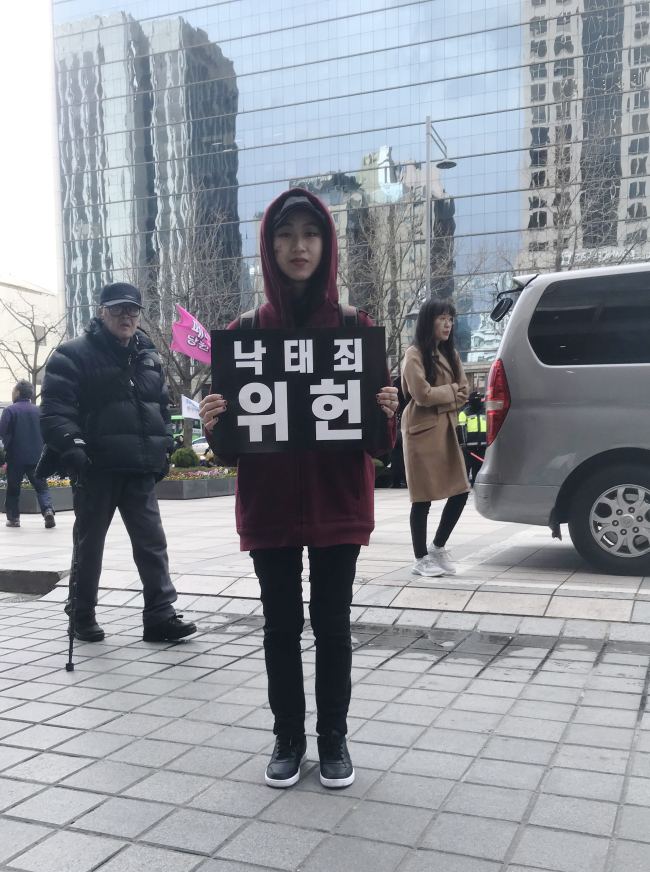 Hong Seung-hee holds a placard that reads “Criminalizing abortion unconstitutional” at a rally against a ban on abortion, in central Seoul, Saturday. (Hong Seung-hee)

Cost of the ban

Activists say the law criminalizing abortion, enacted in 1953, shows that the state views women as “baby-making machines” and fails to reflect the times.

“The government has long used women and abortion as a way of population control. But abortion is about women’s human rights that should be protected,” said Hong Yeon-ji, an activist from Womenlink. “An abortion ban should not be seen as an indicator of social morality.”

Husbands and boyfriends sometimes exploit the law to blackmail women who have had abortions, by threatening to report them when the relationship goes sour, the activist said.

“If the abortion ban is scrapped, doctors would have to receive professional training on how to perform abortion procedures and sex education at schools should get more realistic too,” she said.

There are exceptions to the ban. Under the Mother and Child Health Law, abortion is legal when the mother’s health is at risk or in cases of rape, incest or severe hereditary disorders. The woman must have the approval of the child’s father, even in cases of rape or incest.

All abortions, without exception, are illegal after the 24th week of gestation.

Women who have abortions risk up to a year in prison or a fine of 2 million won ($1,800), but their male partners are not punished. Doctors who perform the illegal procedures face up to two years in prison.

In reality, however, individuals are rarely prosecuted for abortion and the practice is widespread.

The cost of an abortion is 500,000 won on average, but rises after 15 weeks of pregnancy -- to about 2 million won, according to a doctor who wished to remain anonymous.

Some 50,000 abortions took place in Korea in 2017, a drop from an estimated 168,738 in 2010. Experts attribute the decline to the increased availability of morning-after pills and better awareness of birth control. 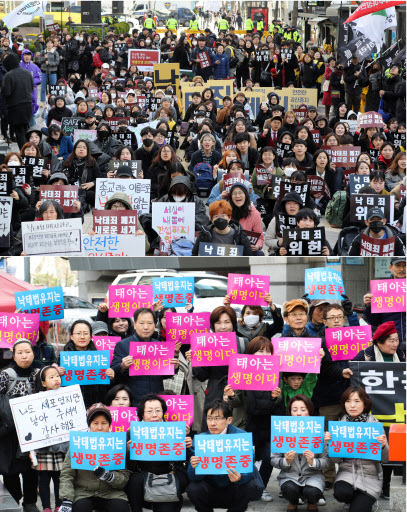 Activists for and against abortion ban hold rallies in central Seoul on March 30. (Yonhap)

“I had no choice -- whether it was a good clinic or not, whether it was expensive or not -- because I needed to get an abortion,” the 28-year-old Hong said. “The whole process would have been safer and easier if abortion were not illegal.”

More and more women are also turning to shady online sites to buy abortion pills, which cannot be obtained legally here, according to Kim Jae-yean, an obstetrician and director of legislation with the Korean Association of Obstetricians and Gynecologists.

“Women who get abortions without sufficient knowledge and information could die of unsafe abortions,” Kim said, adding that abortion pills sold on illegal sites could also be fatal.

“Doctors perform abortions risking their medical license,” he said in explaining why it was so expensive. “But although it is illegal, it is difficult to turn down teenagers and rape victims asking for abortion.”

Vulnerable women, such as teenagers and victims of sexual violence, are the most impacted by the current abortion ban.

“Rape victims must prove they have been raped to get a legal abortion. In the process, they suffer secondary damage,” said Autumn Park, an activist with the Korea Sexual Violence Center. “We believe women must be able to have an abortion without having to prove anything.”

A recent survey of 10,000 women aged 15 to 44 conducted by the Korea Institute for Health and Social Affairs showed 75 percent of Korean women believe the abortion law should be amended because it is unfair to punish only women and because it violates women’s health rights. 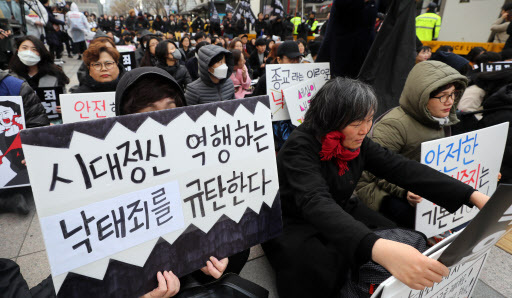 A group of women’s rights organizations hold a rally demanding the abolition of the abortion ban in central Seoul on Saturday. (Yonhap)

“It is wrong to put the issue of abortion in the framework of fetal rights against women’s right to choose,” said Lee Han-bon of Lawyers for a Democratic Society. “Under the Constitution, a fetus has no right to life because it is not recognized as a living being.”

“Punishing women for abortions is an excessive violation of individuals’ basic rights by the government -- rights to reproduction, health, self-determination and life.”

On the other side of the aisle, pro-life activists, Protestant and Catholic groups call for a continued ban on abortions.

They believe an embryo is a human being, so an abortion amounts to murder and women’s right to choose cannot outweigh the fetus’s right to life.

“If the abortion ban is scrapped, a fetus would be treated as a good that can be destroyed anytime. Rather, we should hold accountable men, too, for abortion and establish systems in which women don’t feel it a burden to give birth to babies,” Syn Dong-yeil, a Hankyong University professor, said.

“The right to choose is less important than the right to life. The government has a duty to protect its people, which means it has to punish those who get abortions.”

Earlier this month, Cardinal Andrew Yeom Soo-jung, during an anti-abortion rally in Seoul, said abortion was an act of killing a baby that has just started its life.

“We should instead strengthen institutions that can help women healthily give birth to babies and raise them by recognizing a newborn’s life as responsibility shared by both women and men, as well as society,” he said.

Earlier this month, the National Human Rights Commission of Korea stated its opposition to the abortion ban for the first time.

Now, attention has turned toward the Constitutional Court.

In 2012, the court found the abortion ban constitutional in a 4-4 decision. At least 6 of the 8 justices must agree that the law goes against the Constitution to rule it unconstitutional.

The current case was brought in 2017 by an obstetrician-gynecologist who was charged for conducting 69 abortions between November 2013 and July 2015.

Expectations are rising that the court may rule the abortion ban unconstitutional.

Constitutional Court Chief Justice Yoo Nam-seok and two other justices have said the abortion ban should be overturned. Two others have not made their positions public, but in general they are considered to hold liberal views.