According to Cheong Wa Dae, Moon will set out to Washington on April 10, and return immediately after the summit the following day.

At the meeting, Moon’s seventh with Trump, the South Korean leader will focus on North Korea issues, and South Korea-US alliance, according to Cheong Wa Dae. 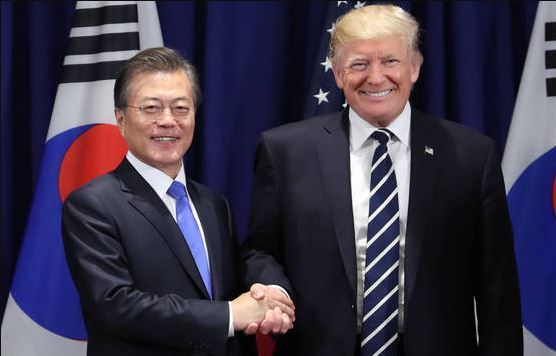 (Yonhap)
“The two leaders will discuss ways to strengthen the Korea-US alliance and cooperation between the two countries for establishing peace on the Korean Peninsula through complete denuclearization,” Moon’s chief press secretary Yoon Do-han said.

Moon’s meeting with Trump comes amid a series of sensitive developments in US-North Korea relations, in which Seoul has taken on the role of mediator and facilitator.

Despite Trump’s repeated statements regarding his belief that North Korea is seeking changes, his summit with North Korean leader Kim Jong-un in Hanoi on Feb. 28 ended without any agreement.

The claims were rebuffed by North Korean Foreign Minister Ri Yong-ho in a rare meeting with the press, where he said that the North had only requested sanctions affecting people’s livelihoods to be removed.

Since then, the North has taken a number of actions that cast doubt on the future of inter-Korean relations and the denuclearization talks.

The North’s Vice Foreign Minister Choe Son-hui has stated that Pyongyang would not give in to the US’s demands, and hinted that the regime could resume weapons development programs.

Satellite images captured by US-based organizations have also revealed movement at a missile testing and satellite lanching site in the North, raising questions about the regime’s intentions.