In addition to K-pop’s nonverbal appeal, the language barrier is being broken down by a network of fans who translate Korean content into other languages in real-time. 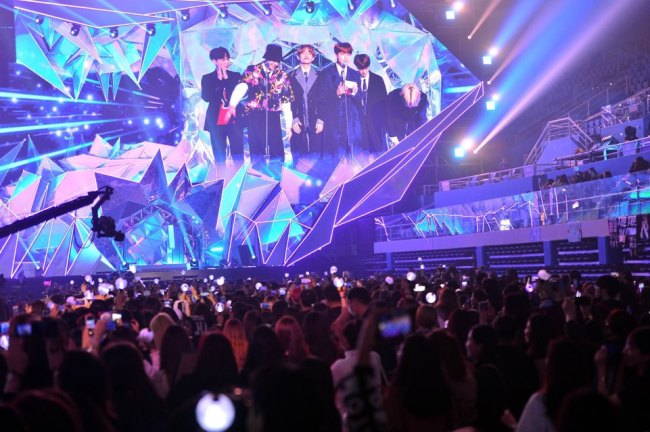 Working individually or in teams, these volunteers translate all kinds of BTS content -- almost immediately upon their release. Some of them boast a Twitter following of hundreds of thousands to over a million.

“There are obviously things that can be communicated nonverbally, such as through performance and music, but understanding the lyrics and the message of the whole album can foster even greater admiration for the artist,” Marquez told The Korea Herald.

V Live videos subtitled by fans (Naver`s V Live)
The platform has a high proportion -- 80 percent -- of its users outside Korea, and its content, largely in Korean, is translated into 58 different languages by fan contributors, according to V Live public relations official Yang Ha-na.

Although V Live offers subtitles by in-house translators, fan-translated subtitles often garner a better response from other fans, possibly because fans tend to be “more dedicated followers” of the subject, she said. In the same vein, artificial intelligence translators cannot yet beat the fans.

The highest-rated translator on V Live, who goes by Solnce_T, stressed the importance of translation for non-Korean K-pop fans, saying, “A lot (of K-pop content) would not enjoy much popularity without the availability of subtitles.”

“If you do not understand what it is about, whether it be a song, TV show, or livestream, your interest is likely to wane over time,” she said. Her claim is backed by the Korea Consumption Culture Association’s 2016 report that showed K-pop fans who study Korean are more likely to retain interest than those who do not.

While it is entirely possible to enjoy K-pop content without understanding Korean, fans who do not know Korean “do not understand what is at stake,” the V Live translator said. “There are no language barriers in music, (but) it is crucial to understand the meaning of each song, which often contains themes and narratives.”

And interest in K-pop often burgeons into motivation to learn the Korean language -- as it had for her.

“I have encountered people who became seriously engaged in studying Korean just because they like BTS’ music.”

Lee So-young, who teaches at Seoul National University’s language education institute, also acknowledged the cultural factor behind a recent boom in language learning, though she warned against using popular culture as the sole platform for learning.

“Mastering a foreign language is a long-term devotion that needs to be fueled by interest in and passion for culture in which the language is rooted. But there is a danger of being exposed to popular culture only without a grasp of its context,” she said.

“An unknowing popular-culture consumer may develop a biased perspective because it is a highly marketed, consumerist-driven genre of a much broader culture.”