Kiwoom Bank, led by local brokerage Kiwoom Securities, touts its financial strength and a diverse shareholder base that includes telecommunications and retail companies. Toss Bank, steered by Viva Republica, operator of popular payment platform Toss, has decided to underline its forte as an innovative fintech leader.

Late Wednesday, the Financial Services Commission announced that three consortia had submitted applications for the business license to operate a new internet-only bank.

The two actual contenders are Kiwoom Bank and Toss Bank, while the smallest unit -- Anyband Smart Bank -- is expected to drop out of the race due to a weak shareholder base and because the documents it submitted are considered inadequate. 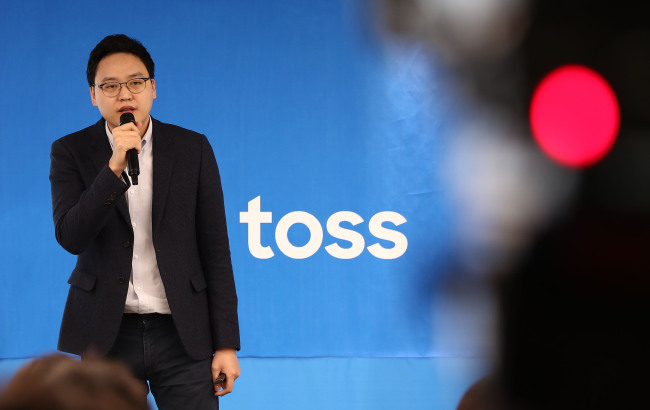 “Based on our experience of operating the L Point membership system, we shall work (with Kiwoom Bank) to find ways of expanding financial benefits for our customers,” the company said in a press release.

Consisting of some 30 players, mostly involved in finance, telecommunications and retail, the Kiwoom consortium aims at creating an “open financial platform” for both customers and business operators.

“Our composition diversity allows us to expand the horizons of the internet-only bank sector and to suggest a new business model,” said an official representing the consortium.

“Toss was the first entity to pool an individual’s financial information, including bank accounts and payment records, into a single platform. With such comprehensive data, I believe we can finally find an adequate way to serve ‘thin filer’ consumers,” said CEO Lee Seung-geun.

Thin filers are people with limited credit histories who find it difficult to get loans. According to Lee, Korea currently has an estimated 12 million to 18 million people in this category who could benefit from Toss Bank’s envisioned services.

Until now, traditional banks could not accurately assess a thin filer’s credit score due to a lack of comprehensive data on his or her financial assets, income, spending and so on. Because of that blind spot in the system, they often had to take out high-interest personal loans or ask a third party to guarantee their loans.

Toss Bank’s idea is to leverage the individual financial and payment data collected via the Toss app, as well as through its strategic partners -- online fashion store Musinsa, real estate app Zigbang and e-commerce platform Cafe24 -- to build a credit scoring system backed by hard data.

In response to skepticism over the consortium’s ability to finance Toss Bank, Lee said it should not be a problem, despite its startup status and the greater capital held by its securities-led rival. After all, Lee said, Viva Republica has sufficient cash reserves on its own to run the new bank, and its other shareholders are big-name players that can pitch in capital as needed.

The Toss Bank consortium consists of Viva Republica, which holds a majority stake of 60.8 percent; Korean strategic holders with a combined 19.9 percent stake; and foreign venture capital firms with a 19.3 percent stake.

The winner is expected to kick off business early next year, joining the two conventional internet-only banks, K-Bank and Kakao Bank. Though a maximum of two consortia are eligible for preliminary approval, the regulator has hinted that it may approve only one.