For retailers and distributors, the first is the most difficult consumer group to target as their tastes in books are just as diverse as their backgrounds. The most lucrative and competitive market, on the other hand, is that for young English learners, as Korean moms -- always willing to reach into their pocketbooks for their children’s education -- wake up to the power of reading in language learning. 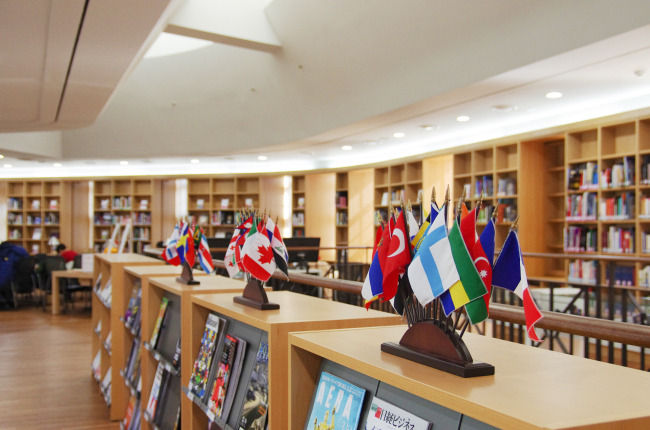 The foreign-language section of Kyobo Book Centre holds a special place in the hearts of many Korean academics and elites.

Opened in June of 1981, when overseas travel was not allowed in Korea unless for the purposes like business or study and there was no online commerce, the bookshop quenched the local thirst for foreign culture, literature and knowledge.

Almost four decades on, Kyobo, now a 35-store franchise and the nation’s biggest book retailer, is still the go-to store for locals and expats alike for browsing English books. The foreign book section now accounts for about 5 percent of its total sales.

Kyobo’s flagship store in Gwanghwamun, central Seoul, currently stores around 25,000 foreign-language titles, generally with one to three copies of each.

Most popular among the foreign titles are English fictional works that have been adapted into films or TV shows, according to Hong Seung-du from the store’s purchasing department via email.

Aside from various one-time promotions and events, the franchise holds a large annual sale in November, offering up to 30 percent discounts on a vast range of imported books.


What The Book? Whatever the book!


What The Book is a bookstore founded by an expat for expats.

Now owned and managed by co-founder Yoo Hye-rim, the bookstore carries both new and used books and has an efficient English language online store.

Despite its relocation in 2017 farther away from Itaewon’s main street, the shop had a steady stream of visitors when The Korea Herald visited on a recent Sunday afternoon. Two clerks and Yoo herself attended to the customers -- mostly foreigners.

Some 20,000 books are available for sale at What The Book’s physical store opposite Cheonghwa Apartment complex in Itaewon. About half of them are used books. Compared to retailers in both the new and used book business, the shop appears to have its strength in the abundant collection of young adult fiction.

But what really makes What The Book special is its willingness to serve expat bibliophiles who might have difficulty getting hold of what they want to read in Korea.

“When a customer comes in looking for a book that we don’t have here, we help the person buy it via our website. It is shipped directly to his or her address from the US,” one of the clerks explained.


Itaewon’s Foreign Book Store is one of only a few used-book shops in Korea where expats can spend hours combing the shelves for rare finds.

At the same location near Noksapyeong Subway Station, owner Choi Ki-woong has diligently run the tiny store since 1973, opening from 10 a.m. to 9 p.m. – almost every day for over four decades. 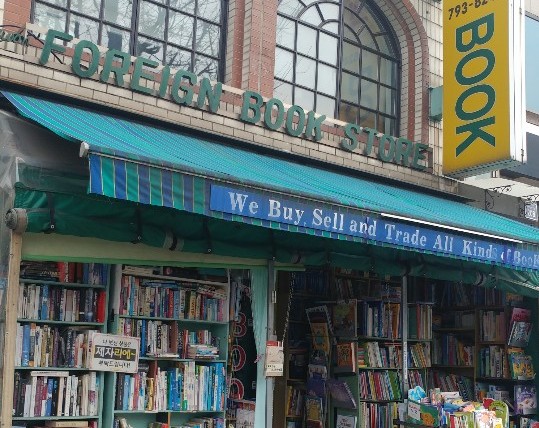 Foreign Book Store in Itaewon (Lee Sun-young/The Korea Herald)
On the facade of the two-story premise hangs a banner “We buy, sell and trade all kind of books.” And befitting the ambitious business slogan, the store carries over 100,000 titles stocked floor to ceiling.

Choi started in the business in the 1960s, collecting books, catalogues and magazines from US army base garbage dumps in Seoul. Now, in his mid-70s, the shop and its massive collection of books are a heritage of not just Choi’s family but the city’s, as Seoul officially designated it as the Seoul Future Heritage in 2015.


Book-themed cafes or cafe-like bookstores have become trendy among young Koreans. And in many of these places, English books sit nicely on the shelves more as decoration accessories than actual items for sale.

But some have a surprisingly good collection of specialty books written in English or other languages. Arc N Book near Seoul City Hall and Hyundai Card Cooking Library near Dosan Park in Apgujeong, Seoul, are two among them.

“Foreign-language books take up 7 percent of our books, while it is usually around 2 percent at other bookstores,” said Kim Ji-in, a representative from OTD Corp., which operates Arc N Book.


Seoul Selection: everything about Korea


Seoul Selection is a bookstore, publishing house and translation agency founded in 2002 by a man on a self-appointed mission of letting the world know Korea better.

The bookshop, opposite of the palace Gyeongbokgung, the No. 1 destination for foreign tourists in Seoul, carries some 1,500 English titles, not just its own publications but many others written by Koreans or that are about Korea.

“Nowadays, people from more diverse places in the world look for books about Korea and they want to know more about Korea, not just bibimbap,” founder and CEO Kim Hyung-geun said recently on Arirang TV.

In line with Korean fiction being discovered on the global literary scene, the bookstore also prominently displays books by novelists Shin Kyung-sook, Han Kang and Kim Young-ha, he said.


Big public libraries, especially concentrated in Seoul, tend to hold large international collections. But in recent years, small libraries are also beefing up their foreign-language volumes to move in sync with the country’s growing multicultural population.

Jeongdok Public Library in Samcheong-dong boasts just over 20,000 international books and materials, but it has dedicated a room and team of librarians to the collection. 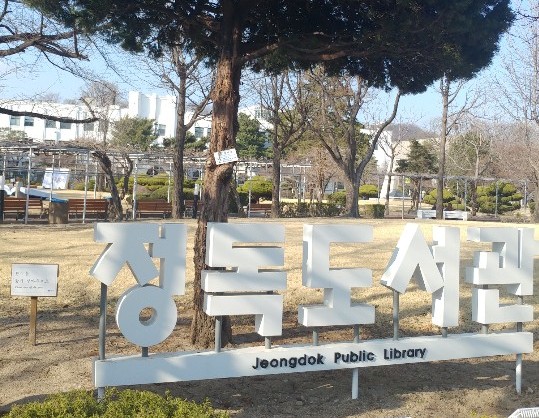 Jeongdok Public Library (Lee Sun-young/ The Korea Herald)
Visitors are mostly foreign residents in the neighborhood and Korean moms with young children learning English, said Bae Young-yi, one of the librarians there.

“Nowadays, libraries put more resources into international collections in order to better serve multicultural families,” she said. Jeongdok plans to hold its annual multicultural festival in May, she added.

Gyeonggi Province, with a multicultural population of 570,000 out of a total 13 million, has rolled up its sleeves to increase residents’ access to books in other languages.

With a budget of 2.7 billion won ($2.4 million), it plans to support local libraries’ foreign book purchases and the installation of multicultural collection rooms.